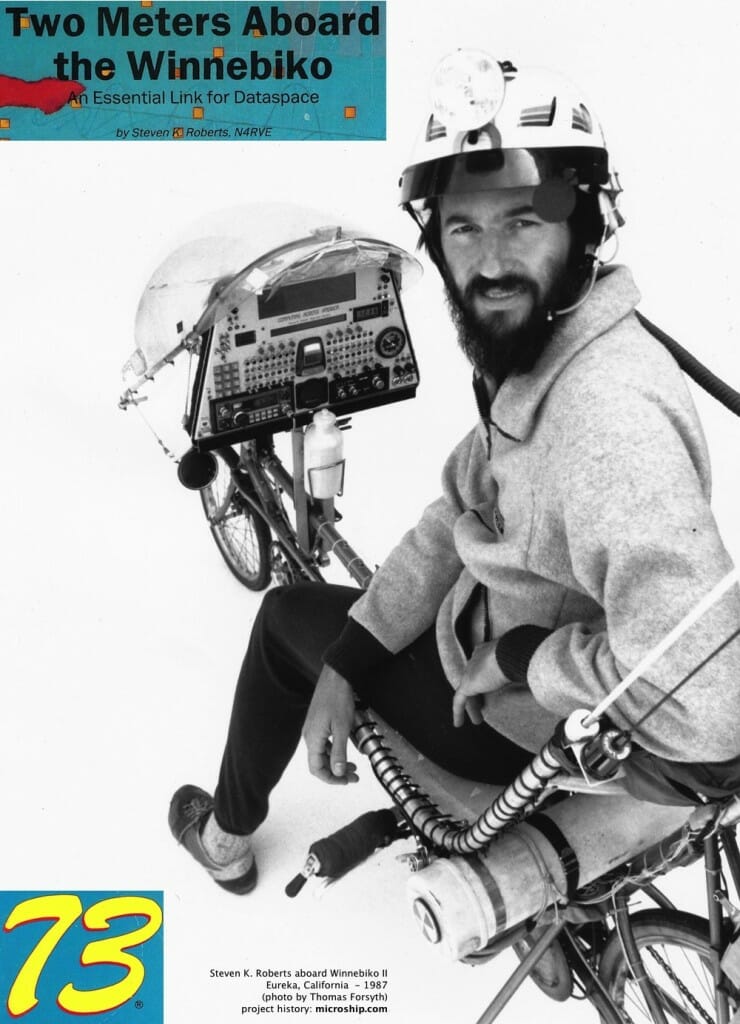 During the second bike journey, I had an ongoing column in 73 Magazine, which gave me free rein to talk about any bike geekery as long it was at least vaguely radio related. It was kicked off by a cover story, and this first regular piece focused on the most generally useful bit of ham gear aboard… the 2-meter VHF rig.

The photo above was not in the magazine, but is included here to illustrate console, microphone, and antenna since the one in the article is so dark (click to embiggen). This was a fun time, and my ongoing tales in the ham radio press opened a lot of doors as we meandered down the East Coast and beyond.

An Essential Link for Dataspace

I still remember my first attempt at a bicycle-mobile 2-meter installation: A battered Kenwood HT bungeed onto a handlebar pack with a speaker-mike clipped to my shirt. The antenna was a quarter-wave mag-mount Ty-rapped to the rear rack with a ten-foot coil of excess coax lashed to the frame. When the radio’s internal batteries died, well, I was out of communication. A five minute installation job like that, while superficially entertaining, is guaranteed to fall apart under full-time use. There is no such thing as a trivial task where electronics are involved.

But my new bicycle-mobile 2-meter system is considerably more robust. Yaesu’s multimode 290 is shock-mounted in the control console, as much a part of the bike as the 48-spoke wheels and 54-speed transmission. The rig is powered by two fully redundant solar-charged 5 amp-hour batteries, and it drives a Larsen half-wave antenna mounted to the seat back. Audio is piped to either the console speaker or an earpiece built into the helmet, and voice input is either a TT-mike plugged into the front panel or a preamplified electret boom mike attached to the earpiece. A push-to-talk button is embedded in the left handlebar grip under my thumb… and, as I mentioned in last month’s introductory article of this series, the Yaesu is deeply integrated with a number of other on-board systems including touch-tone remote control, bike security, and packet.

When it became clear that the transceiver would be permanently mounted in the bike’s control console instead of just stashed in a pack, the choice of unit became critical. I quickly discovered that no HT could do the job, since the physical distribution and poor readability of controls and indicators would make installation awkward. This led me to consider automotive units, such as the attractive new ICOM IC-28. But the problem here is power — rigs made for cars tend to run warm, wasting half an amp or more on standby. Since my on-board battery capacity of 10 amp-hours has to be shared with lights, computers, security, stereo, and dozens of other loads, automotive 2-meter rigs are unacceptable.

Yaesu, however, markets an interesting hybrid unit in the form of the FT-290R. As an over-the shoulder battery-powered portable, it draws only 100 mA in receive mode, feeding a rubber duckie out a front-panel BNC. But if you want an automotive rig, just unplug its battery pack, snap on a 25-watt amplifier, and hang it conventionally under the dashboard. Perfect! The complement of features is excellent, with ten memories, stored offsets, a call channel, low-power mode, various tuning steps, and so on — and its utility is enhanced by multimode capability (FM, SSB, and CW).

Of course, a rugged outdoor environment imposes some interesting packaging constraints. After puzzling over the problem for a while, I lined a front-panel cutout with channel rubber, supported the radio on a soft foam pad, and tied it down with four coil springs. A clear vinyl cover velcros over the console when the rains come, and the only problem with humidity so far has been in the helmet microphone assembly, far from the radio itself.

It didn’t take long to discover that a built-in helmet audio system is an absolute necessity — trying to handle a speaker-mike while pedaling, braking, shifting, steering, and binary-typing is too much of a juggling act. But here again I encountered problems with products made for typical consumer environments: lightweight boom headsets were apparently not intended to be rained upon. Rain can have two deviation-killing effects: soaking up the high-impedance electret audio signal and wicking into the microphone tube.

It turns out, however, that a Plantronics headset does a quite passable job, especially if a foam ball is added to reduce wind noise and the capsule is sealed with lacquer to keep water out. The headset is mounted to my Bell Tourlite™ bicycle helmet via a baroque assemblage of brass, brazed in a moment of drunken inspiration by one of Eureka’s premier kinetic sculptors. Shielded cables were routed between the styrofoam and the outer helmet shell, terminating in a 12-pin Lemo waterproof connector on the back that also carries stereo audio and power for the dimmable Sunburst “miners” lamp. (The net effect of all this is that I can be light-headed while listening to music and chatting electronically with local hams.)

Audio is carried from the brain-interface unit through an Autac coil cord into the bike’s wiring harness, whereupon it enters the console system through another Lemo connector. Inside, an “audio nexus board” preamplifies the tiny mike signal with an LM324 and provides a convenient point for mixing in other modulation sources (touch tones, packet audio, speech synthesis output, and so on).

Because of the low levels involved in the mike circuit, this system does have a couple of problems. Sharp transients in adjacent harness wires appear on my transmitted signal, most notably those associated with the pulse-width dimmer of the helmet lamp and the 7″ barricade flasher behind my head. A future modification will either change the microphone technology or add a preamp to the helmet.

Audio out of the radio, however, is easy. The Yaesu’s speaker signal is piped into an audio bus structure, feeding the touch-tone receiver chip, the Pac-Comm packet TNC, a cassette deck, the console speaker, and the helmet. A separate mixer amp allows a variety of audio sources to serve this same bus so that, for example, people standing around the bike can hear synthesized speech (“Red alert! Biological life forms nearby…”), a sound generator chip, my voice carried over 2-meters, or a taped message — all through the console speaker.

Back at the helmet, I normally use the comfortable Plantronics ear insert, though I do have the option of piping the various sources into the stereo headphone channels to aid in spatial discrimination. A variation on this, published last year in QST, is in the process of being added to the HF system — comments in a later article of this series.

I will not attempt to conduct a tutorial on 2m antenna selection here — I’ll leave that black magic to RF engineers. I do have a couple of notes on the subject, however.

It is well-known that ½-wave antennas require little or no counterpoise, while ¼ and
5/8 units depend on them. Although a quarter-wave whip works OK on a massive recumbent bicycle (Maggie, KA8ZYW, uses one), the half-wave is dramatically more effective. In pre-launch tests, I found I could hit the familiar Columbus 147.24 machine from about 5 miles further away on the bike than with my ¼-wave-equipped car. That convinced me.

The antenna is a Larsen Kulrod™ Special, and I have to commend the company on a remarkably rugged product. For thousands of miles the base mount has served as a handle for schlepping this 275-pound machine through doorways, up gravel slopes, and across unridable expanses of puddled grasslands…

The only rational place for the PTT switch in a properly installed bicycle-mobile 2m rig is on the handlebar. Unfortunately, due to moisture, the component choice is non-trivial.

I faced the same problem here I had with the handlebar keyboard, though I eventually moved on to rubber-booted elastomeric units for smooth text entry. The ideal PTT would seem to be a good waterproof miniature pushbutton . . . but have you ever tried to find one?

C&K has a “sealed” product, but they are only intended to survive one washing cycle during automatic assembly. They also have no hysteresis whatsoever, and thus quickly become flaky and intermittent when corrosion sets in. I finally settled on a military-surplus sealed Microswitch with a quarter-inch bushing, further protected by a miniature rubber boot from AME. All this is Ty-rapped to the handlebar’s substructure, siliconed, and smoothed over by layers of sculpted foam.

On Maggie’s bike we used an Omron miniature pushbutton with a C&K keycap epoxied on. Though it has very little travel, there is quite enough tactile feedback to provide a pleasant switching sensation.

Every ham who has ever watched a hand-held radio abruptly die because of the power curve of internal NiCads is already acutely conscious of the problems with batteries. On the bike, the difficulties were compounded by a variety of loads, the need for redundancy, random charge/discharge cycles, and a lack of home-base spares. For the Argonaut in the trailer, I use a 4 amp-hour NiCad — I can run it down properly, give it a full solar charge, and hit the airwaves again. But for day-to-day 2-meter operation, I chose Gates starved- electrolyte lead-acid cells, packaged by PB Energy Options of San Mateo, CA.

I’ll save the details of this for May’s column, which will deal exclusively with the solar-charged 7-voltage power system on the bike. But as far as the Yaesu 290 is concerned, I have two 5 amp-hour batteries set up to drive a pair of 12-volt buses. Bus A runs computers, switching power supplies, and the like; bus B handles the radio and all lights. The logic here is that on long night rides I can live without the computers.. . switching battery A onto the B bus as a fresh backup when the low-voltage warning light starts to blink.

As I noted at the end of last month’s feature, the Winnebiko’s 2-meter rig has proven to be an essential component of my nomadic lifestyle. It keeps my relationship with Maggie healthy during times of road-stress, frees us to stray a few miles apart when scouting local resources, and — very significantly — opens doors across the land. Riding through Titusville last night, we were invited to an impromptu gathering at the local IHOP. Hailing the Brunswick, Georgia, repeater from the Hostel in the Forest a couple of weeks ago netted us an invitation to a delightful Christmas party… which turned into a 2-day stay. Everywhere we go, the ham community makes us feel at home.

If my bike-mobile HF and packet systems are a form of sophisticated play, then the 2-meter installation must be viewed as basic survival. And that’s why a carefully integrated design pays off. For the same reason that you wouldn’t wire a house with duct tape and extension cords, a ham station in daily use must be smooth and free from irritating kludges. Cheers from Florida, and see you next month. ..

Posted in Articles by SKR and tagged 73 Magazine, Amateur radio
← Bussing into DataspaceHacker’s Odyssey Takes Him to Keys – Miami Herald →