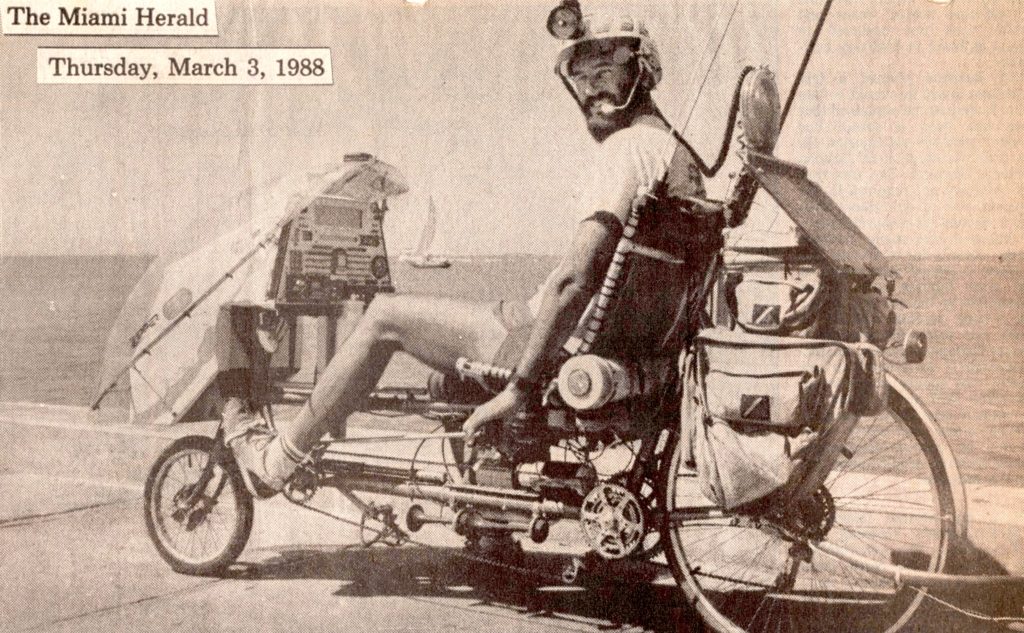 A high-tech nomad pedaled into town last weekend. A self-taught computer wiz riding a self-designed contraption that only just resembles a bicycle, Steven Roberts is continuing a journey that has taken him across 15,400 miles of America in search of good friends he has never met.

When Roberts, now 35, left his mortgage and car payments in Columbus, Ohio, four years ago, he took with him on his recumbent bicycle everything he needed: clothes, camping equipment and an elaborate assortment of portable computers.

Roberts is a free-lance journalist who writes while he rides. With a solar-powered computer connected to the front of his bicycle and an eight-button keyboard built into the handlebars, Roberts says he can type 30 words a minute while he’s riding.

“Technology has allowed me to combine all my passions — travel, writing, romance and high-tech — and roll them into one,” explains Roberts, who then slips his six-foot, four-inch frame easily into the seat of his bicycle to give onlookers a demonstration.

The most important thing technology has given Roberts is the GEnie computer network, a system that allows him to communicate with thousands of computer users across the country. Through the system, Roberts says, he has made computer friends and computer lovers.

“I have some very  close friends I’ve never met,” Roberts says. “I first came to Key West to meet a woman I had already fallen in love with electronically.”

The system also connects Roberts to people willing to give him and his equipment a place to stay for a few nights.

Over the course of his odyssey, Roberts says he has written more than 100 articles for everything from Mechanics Illustrated to Cyclist Magazine and USA Today. He has also written a book — published last month — about the first 10,000 miles of his travels.

The book has three chapters about his first trip to Key West, and their titles explain some of the ups and downs of life as a rolling stone: “the ultimate blind date,” “trouble in paradise,” and “life is a beach.”

“I always had the desire to travel — not to be tied down to a desk — but I was never wealthy enough to just get up and go,” he said.

Roberts was last in Key West for his “ultimate blind date” back in January 1984. The date was nice, he said, but produced no long-lasting relationship. He’s returned with copies of his book and a companion, Maggie Victor, he met while he was taking a break two years ago in Columbus.

After that, the high-tech nomad and his friend will head north, but they don’t have a set itinerary.

NOTE: I was also covered by the Miami Herald in 1983 when I pedaled down the Florida coast, enroute to the ultimate blind date mentioned in the article above.