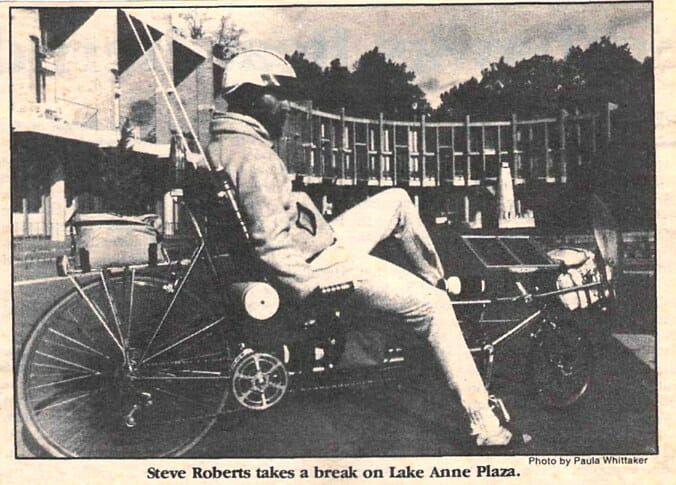 I love the closing line of this one:  “This man is very serious about his alternative lifestyle.” <grin>

Reston was a brief stop for me, with only a couple of days in this planned community that was yet early in its development stages. I’d be interested in knowing how it has evolved in the past three decades… I recall spending some time with folks who were involved in community development, and they were very passionate about their work. 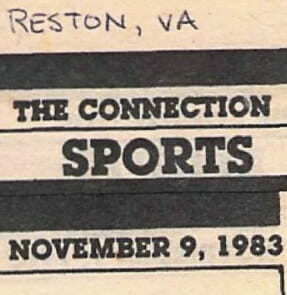 Welcome to the modern world where nothing is safe from the silicon chip or the design schemes of mad tinkerers.

Case in point: Steve Roberts, a 31-year-old inventor and freelance writer pulled into town last week on a bicycle outfitted with solar collectors that are used, among other things, to power a microcomputer and word processor. Roberts, stopped in Reston on a 14,000-mile journey around the perimeter of the Lower 48 States.

The solar unit, which is attached to his bike frame and can be aimed in any direction, collects energy which is then stored in a cadmium battery. The power can be used to run his lights, the word processor and his other gadgets, although Roberts contends that he never writes or programs while he is riding.

On the first leg of his journey, which began in Columbus, Ohio, he says the system has proved to be very reliable. When he is finished with an article, he can go to a phone booth and transmit it by the Compunet [sic] network over the phone lines either to his editor back in Columbus or directly to the editorial offices of some of the magazines for which he writes.

The paradox of all this high-tech wizardry is that Roberts uses it to maintain a lifestyle that otherwise has been striped down to the barest essentials. He carries all his possessions on his bicycle, which when completely decked out with gear, weighs 135 pounds, a phenomenal amount of weight to carry on a bicycle.

The novelty of what he is doing has enabled him to get put up most nights although he is prepared for the elements with Gore-Tex raingear and camping equipment.

Roberts’ bike is a 15-speed contraption called a recumbent bicycle — one on which the rider lies back in a reclining position low to the ground. Roberts pedals with his legs extended in front of him and steers with handlebars beneath his seat.

He says, “I can ride longer stretches than I can on a conventional 10-speed because it is so comfortable. Your hands don’t hurt, or your rear end, or your knees…”

Roberts has averaged 80 miles a day on the flat sections and 40 through hillier areas. He is heading south from Reston toward the North Carolina coast and eventually around the perimeter of the United States.

“Where I end up,” he says, “I’m not really sure because I’ve sold, or am in the process of selling, everything I own, including my house in Columbus.”

Everything left — about $5,000 worth of stuff — is rolling on the wheels of his recumbent bike. To keep it safe, he has a good lock, and also has installed a vibration-activated alarm that is triggered if anybody tampers with the bike or the stuff packed on it. If Roberts is in a restaurant or shopping mall, the alarm triggers a beeper he carries.

This man is very serious about his alternative lifestyle.