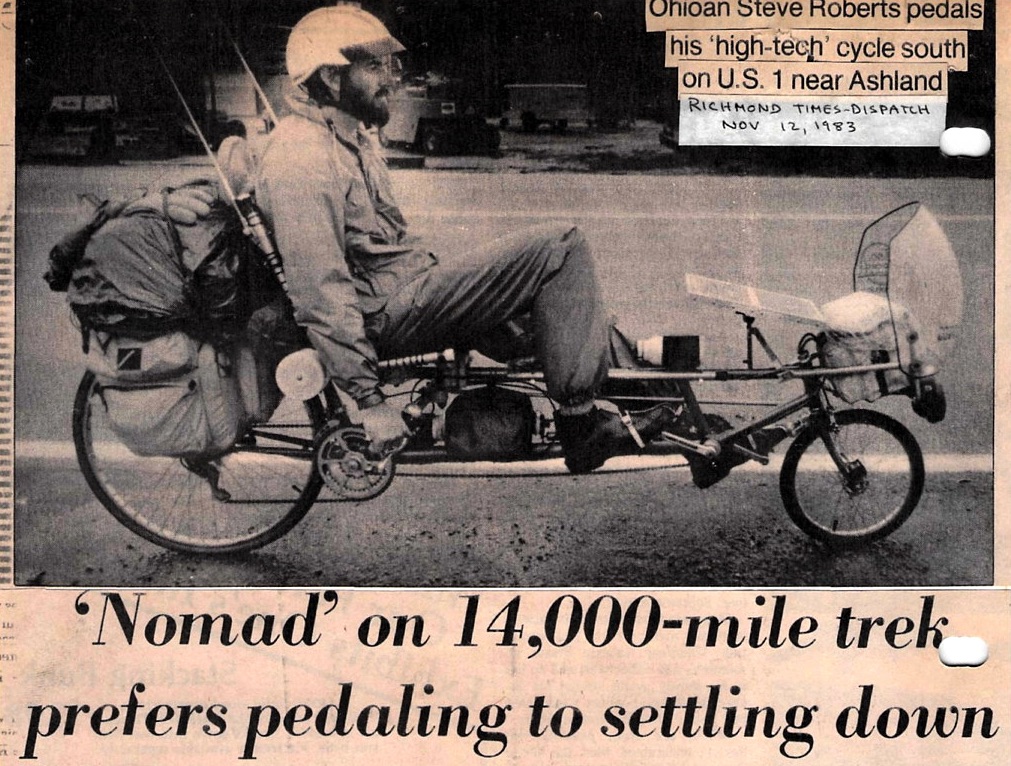 Typical of on-the-road newspaper stories during the first year, this overviews the trip and curious technology, then mentions the “nationwide computer network.” Most folks then were not aware of emerging online culture and how it made a crazy adventure like this possible.

Steve Roberts had some sleepless nights before embarking last month on a 14,000-mile trek riding a contraption he describes as a lawn chair on wheels.

The 31-year-old. free-lance writer and computer whiz from Columbus, Ohio, was a little apprehensive about what might lie ahead on his journey through America.

Twice in Indiana, people hurled objects from passing cars as Roberts pedaled along on the 18-speed recumbent cycle. But for the most part, he said, people have been friendly — and fascinated with the cycle’s gadgets.

“I am very disarming on this bike. I’m obviously a harmless eccentric,” said Roberts, who was passing through Richmond yesterday.

In Patriot, Ind., Roberts was accosted by a carload of town toughs. He began explaining how the cycle worked and let one young man sit down to get the feel of the machine. He soon had them eating out of his hand.

The cycle is equipped with a solar panel that charges a 12-volt battery strapped over the front wheel. The battery powers a front headlight, a large round yellow light on the rear, a smaller red taillight and a flashing xenon light atop one of two antennas shooting up from the seat.

“I look like a carnival at night. It’s better than being a statistic,” he said.

The solar panel also provides energy for a citizens band radio, a soon-to-be-connected ham radio and a vibration-sensitive burglar alarm that sets off a beeper in his briefcase.

“I get a lot of strange comments from people. It’s really a conversational door-opener.” Roberts said.

“There was an old farmer in Christiansburg, Ohio, who asked if I was with NASA [National Aeronautics and Space Administration].”

The battery has outlets so Roberts can plug in a light for camping and the minicomputer on which he writes magazine articles and parts of two books. One book is about his trip, the other about computers.

Roberts built a prototype of the cycle in his basement, then had someone perfect the design. So far, he has logged more than 1,300 miles, including a 750-mile warmup run to get the cycle’s bugs worked out.

Why is he doing it?

“I got tired of a three-bedroom ranch in suburbia and this seemed like a logical next step” he said, half-joking.

“I’ve always wanted to travel and I’ve always had a lust for cycling.”

As Roberts rolls along the nation’s back roads, usually at a clip of 16 to 20 mph, places he has read about take on a new significance, he said.

After leaving Ohio Oct. 28, Roberts has stayed a few pedal strokes ahead of winter.

“As I go south, I have this wonderful extended fall. I’m getting fall over and over again.”

Roberts is keeping a log of his adventures in his minicomputer and transmitting them by telephone into a nationwide computer network. Other computer buffs around the country have read his accounts and written electronic messages offering lodging and encouragement.

From Richmond, Roberts will head south and loop around the Florida peninsula, then arch along the Gulf of Mexico into Texas. He plans to hit the West Coast north of Los Angeles and follow the shoreline into Vancouver in Canada. From there, he will dip down into the Colorado Rockies, then move northeast to Minneapolis.

By late summer of next year, Roberts hopes to be pedaling through Nova Scotia in eastern Canada. By early fall, he plans to wind up the trip in New England.

So far, the trip has been relatively free of pitfalls, though the Pennsylvania mountains provided a challenge.

“I have a newfound respect for gravity,” Roberts said. “There was one hill in particular where it got so steep I thought each pedal stroke was going to be my last.”

By the time he reaches the Rocky Mountains, Roberts hopes to be in better physical shape.

Posted in Media - Winnebiko and tagged Richmond Times-Dispatch
← All He Owns Is on Wheels – Reston ConnectionThe Long, Lonesome Highway →