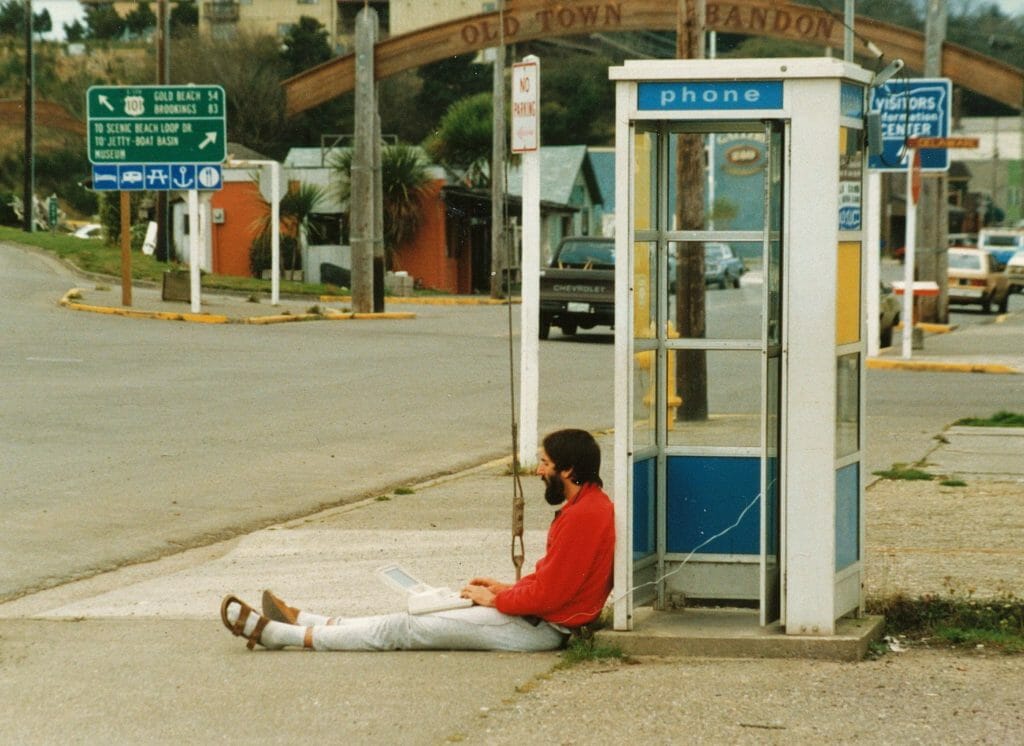 The anticipation began building as it always does before a state line — but more so, given the fact that we were approaching California. California! This is it! Arbitrary and political or not, the state line took on grand proportions in my imagination: I squinted into the distance for the portals of exotica, the gateway to erotica, the entrance to the promised land. Of course, I had learned the lesson on my first bicycle trip: approaching the land of bikinis and hot tubs via the Mojave Desert was a sobering lesson in shattered expectations. But this was the coast, by golly, and the last hundred miles of rugged Oregon seashore bespoke pure magic ahead.

The first change, however, involved not so much culture as lack of same: California has no bottle bill. I have been spoiled by Oregon roads — smooth, glass-free, hardly littered at all. Highway 101 is somewhat less perfect than the rest of the state, but still, Oregon is a clean place: not only do glass and aluminum containers have significant cash value, but twice a year the citizens organize a statewide clean-up. Impressive.

But after the state line, things changed abruptly. The land was still exquisite, of course — waves crashing against rugged sea stacks, scattered bleached driftwood edging windswept beaches, the neck-cricking beginnings of redwood country — but the roadside distractions appeared with a vengeance. Broken glass, beer cans, dirty diapers, food wrappers, cigarette butts, milk cartons, baby shoes, tangled audio cassettes, suitcase parts, magazines, mufflers, even a plastic-wrapped dead dog… all this and more attests to the amazing number of people who have no respect at all for some of the most beautiful land in the world. How can someone toss a Blitz Beer can into a redwood grove? Is Earth their private dumpster?

Steering carefully through the glass and inventing creative punishments for clods caught littering, we headed south — our memories of Oregon cast into even warmer perspective. It had been a good ride, Oregon. We had good luck with the weather after the Smith River fever escapade, prompting many a local to comment on unseasonal warmth. In Port Orford we stayed with a fly-fishing, wood-carving family — swapping tales till midnight and leaving with warm hugs and promises. In Bandon we stayed in the eccentric hostel for two days, pedaling off amid a chorus of Australian-accented best wishes. In Brookings we found a flawlessly maintained state park, met another southbound cycling couple, and drank a toast to Samuel Boardman — the man who protected so much of Oregon’s coast from commercial exploitation. But now we were in California…

Crescent City, to be exact. No contacts there, dusk descending, rain likely, the local state park closed for winter. With our new pedaling friends (John and Karen), we cruised the RV parks and settled at last on the NACO WEST Shoreline Campground.

“Hi!” I brightly told the booth lady. “We’re traveling the country by bicycle and writing about it. How much for a tent site?”

She eyed the four of us and smiled, guarded but friendly. “How many tents?”

“What if we all sleep in one tent and use the other for supplies?” I asked, only half-joking.

This was not a standard question, and she had to call the manager. A long discussion ensued, with many a furtive glance our way. “Well, he says you can do it for seven dollars, but if anyone sleeps in the other tent it will be another seven.”

We said that would be fine with us, paid her, accepted the long list of rules and regulations (no moving the picnic tables, no fish cleaning, no fires at the campsite, no booze or pets in the bathroom, no nuisances of any sort, no, No, NO!!), and entered the mostly-deserted campground — cruising until dark in search of the perfect site and making bed-check jokes about management’s closing threat: “We have a guard who makes regular rounds… he’ll be keeping an eye on you all night, and he better not find anyone in that other tent.”

It wasn’t a bad evening, all things considered. Perfect driftwood fire on the beach, Maggie’s linguini with garlic clam sauce, a good bottle of wine. The four of us poked the fire and ate smores until drowsy, then crawled giggling into our porta-condo and got cozy — drifting away to the incessant hooting of an offshore foghorn with its asynchronous counterpoint of clanging and moaning buoys. The rain didn’t get serious till dawn.

Soggy gray, 50-knot wind, small craft warnings, cold salt spray. I donned three layers and staggered off to the showers, noting the large nightgown-clad woman in an upstairs window staring at our site through binoculars. Camp Gestapo. There was no TV camera in the bathroom, but a crudely painted Yosemite Sam was captioned: “Now hold on there, varmit! [sic] Didja flush it?”

Back at the tent, in heavy winds and coastal rain, Maggie and Karen told the story. Seems the manager had driven to our site (after us menfolk went to the showers) and accosted the women: “You slept in both those tents. You owe us seven dollars!”

“No, that one just has gear in it—” Maggie told him, pointing.

“You owe us seven dollars!”

We packed our wet gear quickly, conscious of the binoculars, acutely aware of being unwelcome. It was an unfamiliar feeling — and time for the power of raw ink. “Never piss off a writer if you have an image to protect,” I always say, so en route to breakfast I called the Triplicate — Crescent City’s local paper. By the time we spent a rainy day in the newspaper office catching up on work, did an interview, and slept in the home of the managing editor, they had their story… and they were even moved to call the Chamber of Commerce and tell them about it. Heh.

Now, the other end of the campground spectrum. Parting company with John and Karen, we climbed over the first 1200-foot obstacle in Redwood country and found ourselves in Klamath — a strangely spread-out town, at once dependent upon passers-by and forbidding. Jack’s Motel was closed for the season: “If you gave me a thousand dollars, I couldn’t give you one of those rooms.” Again, no contacts; and little chance of cruise mode yielding an invitation. We gave up and crunched onto the gravel of the Chinook RV Resort.

Twelve bucks a night, but what the hell — they take plastic. We added a dollop of Kahlua and a few other essentials to the bill and eyed the darkening sky… all the while chatting with friendly Nanette who had left her Oklahoma travel agency to buy this campground. Could we find a place to work indoors? Oh, there’s a clubhouse? With a woodstove? Gee… could we bring the bikes inside? Well hey, if we’re doing all that, can we sleep in there too? No problem. She smiled. We spent the evening on the Klamath River shoreline, playing with a dog named RV and watching a sunset symphony of subtle pastels, then moved in — comfortable and welcome. And here I am, tapping away on the HP by an old potbellied stove while Maggie whips up Kahlua treats and our camping gear slowly dries. Not bad. Not bad at all.

Sometimes, life on the road is a quiet succession of unspectacular events like this — hardly newsworthy in themselves, but deeply revealing in concert. In the last week we have played with 1 and 2.5-year olds, learned about the zenlike attitudes of fly fishing, talked with a myrtlewood gatherer, fended off the advances of a cloying airhead, overheard the urgent intrigue of small-town newspaper operation, learned how to slice bananas with bicycle spokes, eaten cranberry candy, gawked back at tourists, gamboled nude in the sand, played the shining flute in C while gazing at the shining sea, and eaten dinner out of a frisbee. Those are the headlines.

And I’ll see you next week, from somewhere in Humboldt County.

Posted in Miles with Maggie
← High-Tech Biker Riding to Write – OregonFree-wheelers write all along the road – Bandon, OR →