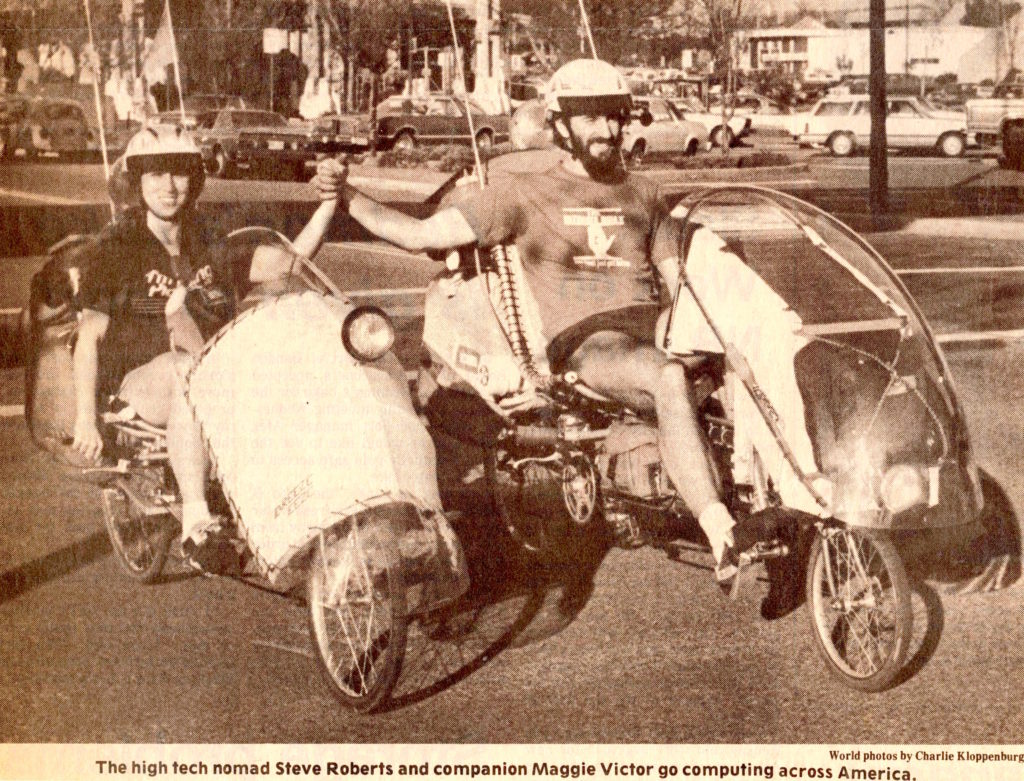 A glimpse from our trek down the Oregon Coast…

While some people can’t walk and chew gum at the same time, a self-described high-tech nomad has found a way to simultaneously ride a bike and write a book.

An eight-key coded keyboard, in tandem with a radically modified Radio Shack 100 with 256K memory built into his “dashboard,” allows Roberts to write an article for Science magazine while breezing down Highway 101 at 15 mph.

Roberts, who calls Columbus, Ohio, his home base, plays the keys on his waist-side handlebars in much the same way he plays his flute during a quiet moment with his riding companion, Maggie Victor.

In addition to the computer, which makes his bike attention-grabbing enough, Roberts’ “Winnebiko” also is equipped with a ham radio, a CB radio, a clock, thermometer, stereo, security system, and any number of other items totally incongruous with a bicycle.

“The bike was sitting next to a pay phone in Ohio,” Roberts said while eating lunch in a Coos Bay restaurant. “This old farmer walked up and was looking the bike over. After a while, he turned to me, spit some tobacco, and said. ‘Are you from NASA?'”

While inside the Coos Bay restaurant, at least a dozen passers-by stopped to gawk at the free-wheeling piece of techno-wizardry. It’s hard not to. According to Roberts, only teenagers feeling too cool to be curious pass it by without a hard look.

Roberts, who said he put “everything he had” into the bike, left Columbus in the fall of 1983 and arrived in San Francisco two years later after completing 9,760 miles and a new book called “Computing Across America” to be released in February.

It is his fourth book and Roberts has written dozens of magazine articles. While on his odyssey crisscrossing America. Roberts wrote a regular column for USA Today. Roberts also submits work to the Genie Network, a form of electronic media available to com puter users. “The story is not the bicycle odyssey itself,” Roberts said. “The story is that I was able to maintain a successful freelance writing career while traveling.”

On that original trip. Roberts’ bike was not the computer monster it is today. He had a portable Hewlett-Package [sic] and wrote only when he stopped.

“I had plenty of computer power with me, but I couldn’t write while I was riding. There is a tremendous amount of time spent pedaling.”

When he reached San Francisco, Roberts returned to Columbus to touch base with his office there and to begin formulating final designs for his computer bike.

It was there that he met Victor. As they tell the story, she was sitting in a jazz bar when he walked in with his portable computer and began typing. She sent a friend over to find out what he was doing. One thing led to another and eventually he asked her if she wanted to go for a bike ride — around the country.

“We’re still on our first date,” said Victor, nine months after they met. I knew it wasn’t going to be your average, everyday bike ride.” she added later.

His bike completed, the pair left for Vancouver, British Columbia, to show it at International Human Powered Vehicle Display Week at Expo 86.

About two months ago, they departed from Seattle on their current excursion, drawing stares and media attention at almost every stop. The situation is ideal for a freelance writer.

“As a writer, I end up with a constant flood of stories — more than I can ever assimilate,” Roberts said.” And publishing books, I’m also making news, so marketing is worked in there. It’s got all the right angles.”

While the situation is professionally ideal for Roberts, it is an equally positive experience for Victor, who left a job in energy conservation, sold her car, paid her bills, and began an adventure.

She describes herself as Roberts’ “lifestyle maintenance manager,” and he calls her his “sensory enhancer.” But when it comes to dealing with the attention, Victor allows Roberts his due.

“I usually just hang in the background,” she said. “My bike is not a showpiece and Steve is definitely the talker of the two of us.”

Roberts has developed, through personal meetings and encounters over his computer network, about 2,500 contacts around the country.

The pair was last seen pedaling down Highway 101 for an overnight stay in Bandon. After that, they have no plans other than at, stay on 101 “for a while.”