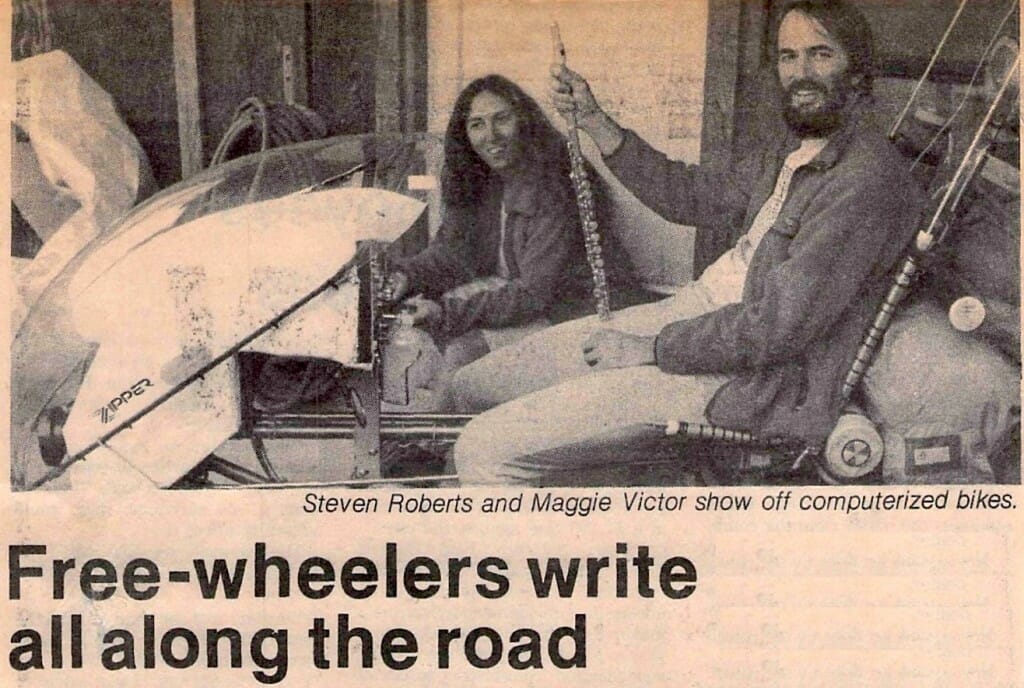 I remember this phase of the journey well. We had taken too long to leave the temporary lab on Bainbridge Island near Seattle, and suddenly found ourselves hurrying south before winter. In heavy rain, we slogged south into Oregon, then had a very difficult 2-day ride over the Coast Range from Eugene. But then it became dreamlike… with sweet little seaside towns and a gradual sense of relief from the chill. Bandon was a friendly spot, and we took the time to chat with local reporter Bob Lothian, who sadly passed away in 2013.

Pedaling down the West Coast on their streamlined, gadget-decked bicycles, Steven Roberts and Maggie Victor draw crowds and stares at every stop.

They were a popular attraction last week at Cranberry Sweets in Old Town, and another crowd formed as they took in the view at Face Rock.

“Sometimes we just park the bikes and walk away,” Victor said.

Roberts spent six months and enough money to buy a new car building his “recumbent” bicycle, which he fitted with computers, an altimeter, compass, lights, ham and CB radios, satellite transmitter, speech synthesizer, telephone hook-up and a control panel that looks as though it came out of a jet plane.

Two solar electric panels and storage batteries power his “Winnebiko,” Roberts said. “All mine has is a ham radio, CB and lights,” added Victor.

The pair started from Seattle two months ago, and are heading south to “someplace warmer”, perhaps Southern California or Arizona.  “We planned a year or two, or three,” she added.

A free-lance writer from Columbus, Ohio, Roberts sold his house and bicycled 10,000 miles around the country in 1983-85. They met in a wine bar where Victor was a waitress (correction: she did not work there, but was also visiting for jazz night). The idea of a nomadic life on the road appealed to her, so she sold her car and possessions, paid her bills, and “started out owning nothing but my bicycle,” Victor said.

“I’m having a great time… but sometimes it’s like the Twilight Zone,” she said, referring to all the attention they get.

Pedaling in a reclining, or recumbent position, saves energy, according to Roberts. They carry everything they need, and communicate via ham radio.

A self-taught electronics wizard who never finished his college freshman year, Roberts believes he is the first person to team a bicycle and a computer in cross-country travel.

Manipulating a binary keyboard fitted to his handlebars, Roberts actually “writes” articles while pedaling. Dozens of credits include science and computer magazines, also Whole Earth Review and USA Today. He sends the articles via satellite directly from his bicycle, or through a phone modem. “Something written two days ago might appear in USA Today, today,” he said.

Roberts also has four books under his belt, and a fifth, Computing Across America: The Bicycle Odyssey of a High-Tech Nomad, is set for release this spring from Simon and Schuster. The book cover shows Roberts parked on his bike next to a pristine Alpine lake, working the keyboard of a microcomputer perched on his lap.

Space, time and efficiency are important concepts to Roberts, who says his invention frees him from the constraints of urban life, while allowing him to travel and make a living at the same time.

“It doesn’t really matter where I am physically,” Roberts said. “When you think about it, information has no mass. Why attach it to something with mass, when it can move at the speed of light?”

Roberts and Victor receive mail, news and invitations via computer through a network called GEnie. Calling up Humboldt County, Calif., for example, the screen showed stopover invitations from a bicycle inventor and a solar greenhouse builder.

They often stay with other science hobbyists, inventors and computer enthusiasts.

They described the road from Eugene to the coast as the most scenic area of Oregon they had seen. “Bandon’s starting to seem delightful,” Roberts added.

He has learned during his travels that Americans do not fit the stereotype of a “homogeneous, media-fed bunch”. On the contrary, he said, “The thing that constantly amazes me in every place I go is that I find intelligence, culture and creativity.”

While most of his articles concern technology, people and the land, Roberts occasionally lapses philosophical.

“I don’t have any goals that have to do with speed or distance,” rather “to beat the traditional trade-offs of freedom and security.” In a recent article he wrote: “I came to realize that the greatest risk of all is in taking no risk.”

Roberts pulled out his flute and played a few minutes before he and Victor headed for their next stop, Humbug Mountain.