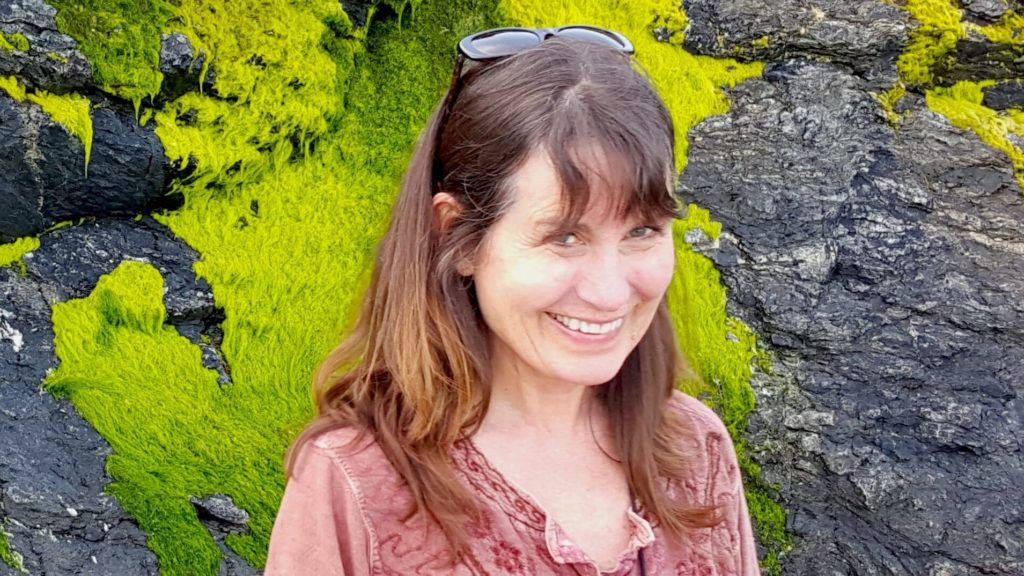 My dear friend Rebecca moved to Missouri in 2015, and in addition to her many family activities and house-renovation projects, she is exploring a new artistic realm. When she posted the image below of her pressure-washer work in the porch-mildew medium, I was inspired to write a bit of Artspeak to help solidify this emerging genre.

There is an excellent discussion in The Guardian of International Art English, if you’d like to learn more about the linguistic traditions at play here… and I have another small collection describing works in the In Death: Unchained Museum of Art.

1 – Under Pressure by Rebecca Parks:
an Exploration of Meta-Patterns

With her “Under Pressure” series, Rebecca Parks expands Outsider Art onto the virgin landscape of the rural deck, exploring the dialectic contrast between Relaxation Spaces and the technologically mediated high-velocity streams of water with which she creates thoughtful, mandala-like representations of family dynamics, overwhelming information, and transitory states. Often pausing in reflection, her own moisture merging with that of a yet-unfinished work, the artist steps into the canvas of macro and micro to remind us of scale, giving a high-five to the hyphae while drawing attention to the vast gulf between the ambient humidity in which mildew thrives and the explosive intensity of the blast that sweeps it away.

Rebecca thus explores the very extremes of water, from passive to invasive, turning these into metaphors of each other and by extension, of information and power. The viewer becomes participant, invited to contemplate our own narrow range of survival and the transition from informational stasis to the overwhelming flood that destroys some and nourishes others, leaving an indelible yet transient meta-pattern on the landscape of our culture. In her representation of this, Parks has captured the diverse cultural overlay of the Internet, our own assimilation, and the struggle that belies the beguiling passivity of a rural porch bathed in the informationally rich vapors of WiFi.

In this challenging self-portrait from her Feline Neurobiology period, Isabelle seeks to explore the orthogonal spaces of figure-ground and reflection. With unblinking intensity, she invites the viewer to contemplate the mirrored gaze of introspection, contextually framed by the illusory continuity of her prefrontal cortex. “If one of us blinks,” she asks, “will the other? How will we know? And what happens to the virtual goblet, captured so clearly in this Work, in the moment when the superior colliculus makes us glance over at that spider? Where did it go? Was it ever even there?” Isabelle’s existential angst, threading insightfully through her entire oeuvre, once again surprises us.

With the latest in his gas-metering series, Marcellin Berthelot invites the viewer to sense the flow of energy… at once explosive and contained, a natural power monitored and directed by the forces of human commerce. Contemplating the Work, one can’t help but imagine the pressurized path to the source across space and time, the latent explosive flare of primitive hydrocarbons belied by the implacable digital display that tracks invisible users downstream — throttled, monitored, and invoiced by unseen corporations as gray as the paint with which he coated the pipes of this remarkable piece. This is the most evocative of his Alkane efforts, and stands in mute testimony to the duality of man and nature. One is tempted to glance about for a burner to satisfy the mystery of the installation’s purpose, but as with his other gas sculptures, the artist takes deep satisfaction in leaving us wanting more…

Posted in Photographs and tagged Art-speak, Humor, Rebecca
← Building a Feline OuthousePopeye and the Dawg →