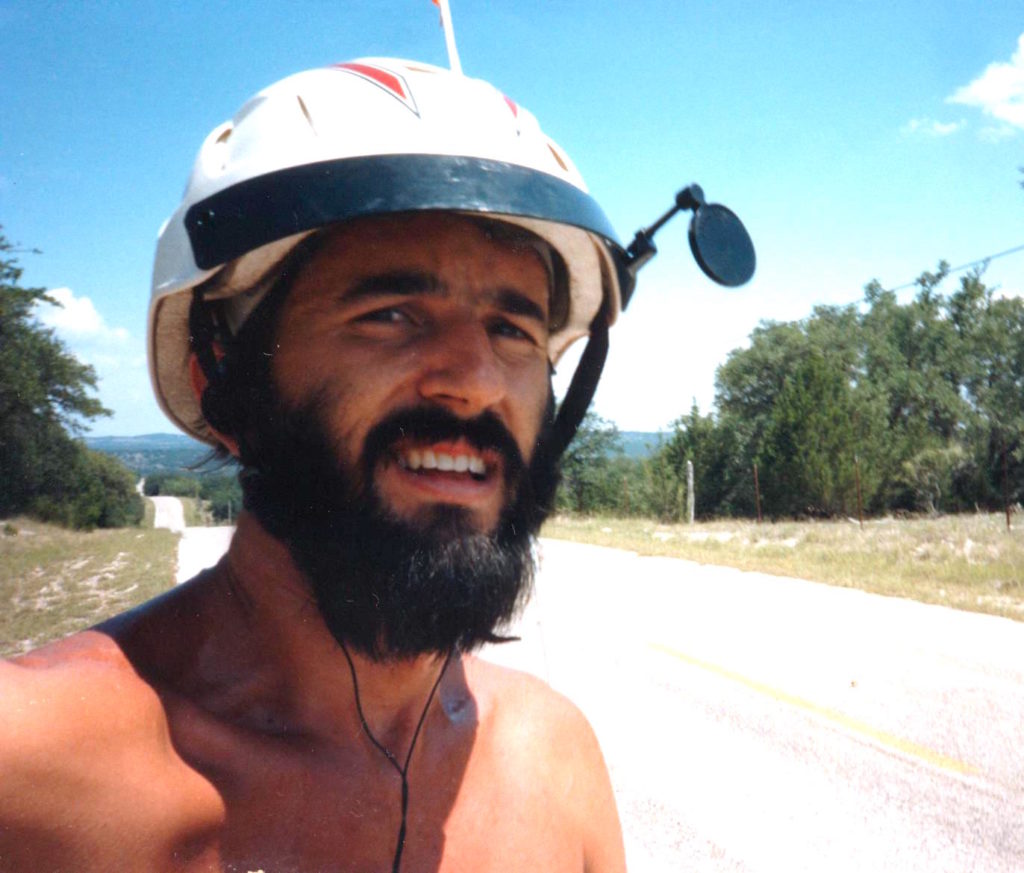 After the cover story of July 5, 1984, this was the first of my columns in the Money section of USA Today, which ran every other week until mid-November (when I hunkered down to write Computing Across America). This would have been awesome PR for said book, but I got caught up in editorial musical chairs that delayed publication for about 3 years. Always something. The photo above is selfie, a day out of Austin, as I continued across West Texas in July. The temperature was 100°.

AUSTIN, Texas — Computers, in the old days, stood alone — each one an island of data processing power, humming away in its air-conditioned room. It was a lonely business back then, giving rise to the classic “hacker” image: that pale, antisocial denizen of the computer room.

But now it’s easy for computers to chat with each other over the telephone, and they are spending more and more time doing just that. The technology has brought us business communications of all descriptions — and has yielded an unexpected spinoff in the form of a rapidly growing subculture, already with nearly 1 million members.

In its most visible form, this network society can be found hobnobbing on commercial networks — such as the well-known CompuServe, which charges $6 an hour — that link a diverse mix ranging from high-tech hackers to grade-school kids, from Academy Award-winning filmmakers to lonely hearts.

But many chose a different route: One of the nearly 10,000 privately owned bulletin-board systems (BBS) available around the clock for free public access.

Unlike commercial systems, these little systems can handle only one caller at time. They don’t allow computer users to chat (except with the board’s owner, if he happens to be home), and the phone is often busy. The callers converse by leaving messages and then checking in later for replies — a method that would seem to limit the appeal of such machines. Yet, many BBSs average 50 to 100 calls a day.

“I avoid the commercial networks for the same reason I avoid cocaine,” one BBS user told me. “They’re expensive and addicting. Boards are free.”

He looked at me as if I had just asked about his reasons for drinking that foamy glass of Shiner Bock. “Hell, whatever you want, man! New friends, free software, craziness, whatever. It’s a whole new culture.”

Indeed, it has that flavor. This conversation took place at a party of local board users here in Austin. It was a small but energetic gathering held around an iced-down keg somewhere in the wilds of Zilker Park. A BBS known as “The Diner” had just received its 10,000th call. What better excuse for a party?

Present at the event: two women and about 40 men. I rolled in on my high-tech bike and began meeting the users, people who were meeting face-to-face for the first time after chatting electronically for months. Here, they met punks, techies, students, professionals.

That diversity says something about the BBS world: it specializes along social lines. Some systems — much in the news lately — are dedicated to hackers, offering stolen software, computer access codes and telephone credit-card numbers. Others purport to be dating services (though women are an absurdly small minority, and there’s no way to be sure that someone claiming to be female really is). There are party boards for the exchange of general small talk, gay boards, punk/violent boards, adult boards (a misnomer?), political boards, religious boards, and many geared to users of specific kinds of computers.

Such systems usually are born to meet their owners’ needs — often just the desire for companionship. As I pedal across the USA I am finding an interwoven network of these electronic clubs, thousands of them, appearing whenever and wherever they are needed.

Of course, the only computer present at the Austin party was the one strapped to the back of my bicycle. People were here to drink beer and socialize, not trade stolen passwords.

So this may be the beginning of a new culture, but beneath all the technology it’s as old as civilization itself. Computers are finally starting to bring people together instead of keeping them apart.