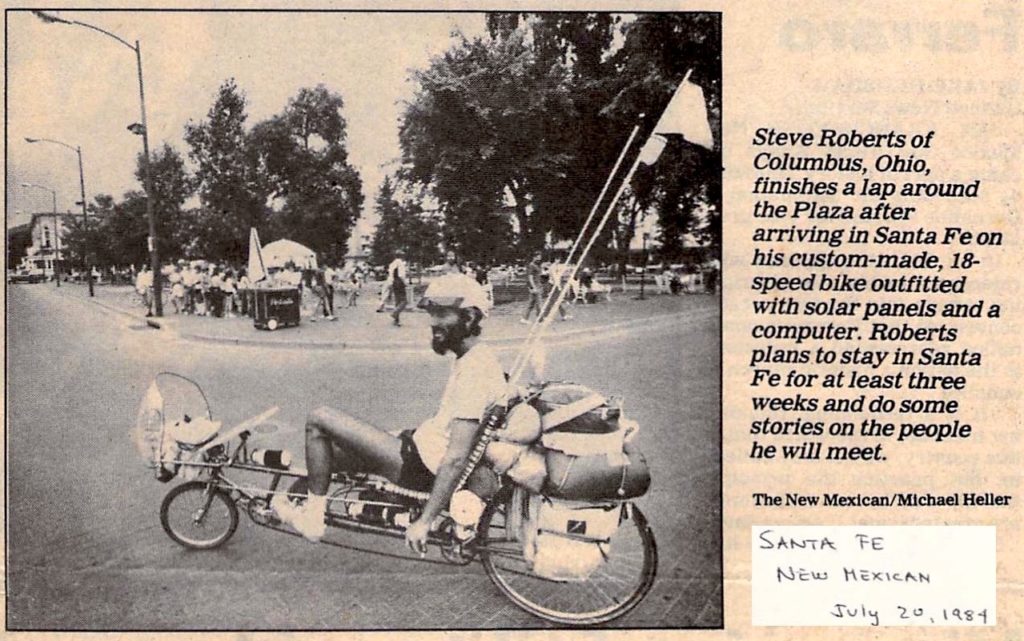 I found Santa Fe fascinating and stayed about three weeks before heading north to Colorado. Caption of the photo above:

Steve Roberts of Columbus, Ohio, finishes a lap around the Plaza after arriving in Santa Fe on his custom-made, 18-speed bike outfitted with solar panels and a computer. Roberts plans to stay in Santa Fe for at least three weeks and do some stories on the people he will meet. (photo by Michael Heller)

“Its a real caper,” said Steven K. Roberts, who is traveling across the country on a bicycle with a computer and solar panels.

Roberts left Columbus, Ohio, last Sept. 28 in quest of no particular destination. He is seeking background for his fourth book, “Computing Across America.”

Roberts, trekking across the United States on his $2,500 bike, finds a little “madness” in a lot of places he visits.

“The tourists drive me crazy,” he said. “They think I’m a street theater.” He said in every city, “there is a cultural re-adjustment.”

His “one-of-a-kind” bicycle has 18 speeds and is”designed for comfort.” It stretches 8 feet in length and comes equipped with some solar powered features.

The solar panel, which charges batteries for his portable computer, CB radio and lights, is just one feature to his uniquely designed bike. The bike also includes a sophisticated alarm system that goes off if it is moved.

Roberts said he has no particular destination because “you lose respect for everything in-between.

“I’m not trying to set any records. I do not care how fast I go,” he said, explaining why the journey has taken him so long. He has passed through 16 states to date and plans on seeing more.

Roberts, a free-lance writer and owner of Words’Worth in Columbus, carries his portable computer everywhere he goes, toting it in a small handbag.

With that computer, he is able to send to his secretary in Ohio all his work as she prepares it for his publisher.

Roberts plans to stay in Santa Fe for at least three weeks and do some stories on the people he will meet. He also writes for USA Today.

Roberts said he will be featured on “CBS Morning News” Monday morning.