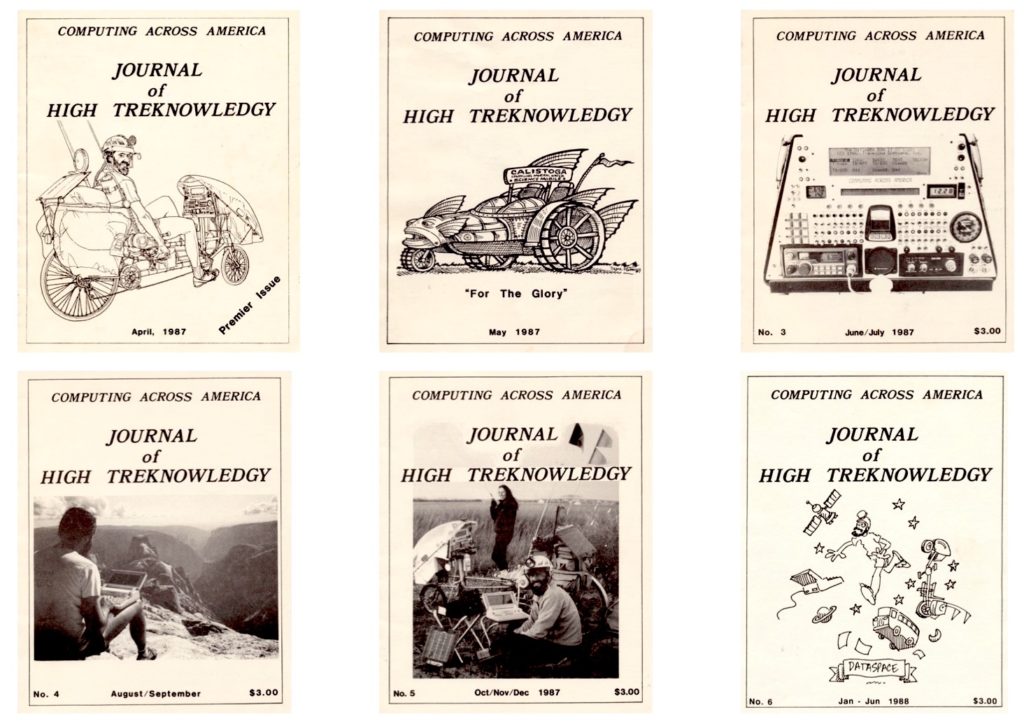 We would have pedaled down to Ferndale today if it hadn’t rained.

For over a week we’ve been planning our New Year’s Day departure from this place that has grown too familiar. All through December the sun shone brightly — by Christmas I was so sure that it would rain on January first that I almost called the National Weather Service to offer them a hot tip. Hitting the road on a bicycle is a more reliable rainmaking technique than washing your car… try it sometime.

Oh, I suppose it’s just as well — we were up until four A.M. celebrating the end of 1986 and the resumption of our travels. Imagine the scene:

Over a thousand rubber bands turned loose in a small house, with seven schnapps-soaked loonies firing them at every hint of exposed flesh — raising welts, cries, and crazy guffaws of short-lived victory. Maggie in the new mini-dress, her cycling legs an achingly inviting target; June sniping from behind furniture and giggling at every strike; Micki dashing into the open for ammo only to yelp at the unexpected zinging barrage from all sides. The Fathers of Trollo waged their own war, thundering at each other like F-4 Phantoms as I crept about on missions of private intrigue: gathering ammo, ambushing the unwary, and hiding rubber bands in odd places to serve as a perpetual reminder of our visit. Yes, it was a gentle night… at the stroke of 12 we dashed to the alley and fired salvo after salvo from Ken’s homemade oxy-acetylene cannon — potatoes mashed against distant walls, our ears ringing, our retinas seared with hot streaks of muzzle flash, the scratchin’-lickin’-bitin’- snortin’-stinkin’ dog trembling against June in mortal terror. More schnapps… more nachos… more rubber bands… and then gradual acquiescence after far too many hours of defying gravity, bodies sinking to couches and floors, whimpers of pain and exhaustion mingling with the surreal sounds of late-night television and the dwindling drunken traffic of my third New Year’s Eve on the road…

And there are thirteen years until the 21st century.

So. It’s 1987. It is traditional for columnists to rhapsodize at length about the past and future as viewed from the standpoint of that infinitely small point moving between them. But the former is colored by the present and the latter is pure conjecture, so instead of putting travel predictions in print I’ll just tell you what I want to do.

If you’ve been following these writings for a while, you have probably noticed a certain variance of purpose. Sometimes fun is my bottom line; sometimes I’m seeking a resolution of the old freedom-vs-security trade-off. Sometimes I want to travel forever; sometimes I get all misty-eyed over the sense of home that appears wherever I take the time to look. I go on great technoid binges of logic design and system integration, getting so deeply immersed in electronics that streets with NO OUTLET signs seem vaguely primitive — then I turn my back on all this gizmology and refuse to discuss it. Peer over my shoulder one day, and you’ll find me celebrating my nomadic lifestyle for its variety of contacts; do so the next and you’ll hear me muttering about the exhausting sameness of endless beginnings.

What am I really up to? Has this just become my default mode?

OK. Here’s the plan, and I welcome correspondence from anyone who can help me pull it off. As I explained back in Freedom vs Security, wandering the planet on a computerized bicycle and writing about it is an ideal lifestyle for a confirmed generalist living in fear of commitment. It sounds a lot like large-scale Brownian motion, but my life can actually be reduced to a simple formula: I open doors with my bizarre key, make observations about what goes on behind them, draw inferences from related experiences, and then pass stories and commentary along to the rest of the world in exchange for enough of a living to keep going. It’s just a form of street theatre: The Computing Across America Traveling Circuits…

And, interestingly enough, it more or less works. Publicity happens with little or no effort, and even though people generally recognize the Winnebiko instead of the guy sitting on top of it, the net effects are the same: brand recognition, invitations, publishing opportunities, free hardware or services, and even, amazingly enough, that absurd yet flattering “groupie effect.”

Now. Let’s turn all it into something that doesn’t depend upon momentary whims and chance encounters.

Throughout history, writers, satirists, commentators, cartoonists and other interpreters of the culture have been supported by the population — whether through salary, spare change tossed into passed hats, or the generosity of patrons. We pay these people to expand our vision, to digest reality and present it to us as “entertainment.” What sounds at first like something essentially playful, however, turns out to have critical importance in the evolution of our culture: it is the job of these people to raise human awareness, sniff out absurdity, spotlight political nastiness, recognize trends, and define our collective self-image — all the while inviting us to step outside the routine of daily life and be entertained by what they have to say. Every component of popular culture, from the Sunday funnies to 60 Minutes, is part of the ongoing education of our complex society. It is the measure of Berke Breathed’s success, to pick one of many instructive examples, that he can convey an elusive and essential message in the middle of thigh-slapping laughter.

So what’s all this have to do with me, my compu-bike, and big plans for 1987? This: I have become a living caricature of information technology, a wandering commentator on the zany American scene, a generalist/journalist with a 220-pound press pass, and a rolling media event. That’s almost enough to insure success… but not quite. What’s missing is marketing, that mystical process that turns ideas into products and products into necessities. Publicity alone doesn’t pay the bills.

“Marketing” in the context of what started out as a personal getaway adventure sounds like sacrilege. It calls to mind vendor decals and slick packaging, product slogans and pithy superficial distillations of my life that can fit onto a bulk-rate glossy flyer. But here, dear readers, is the reality:

Weekly online columns make valuable contacts but earn just enough to buy one reasonably fine restaurant meal a month, assuming moderation on the bar tab. Occasional freelance pieces sometimes pay the rent back at the Ohio office. A book about my travels is due in two months from a publisher that has never tried selling anything outside the exciting but small world of library and information science. A little bit of random consulting work pays well but draws precious energy from the adventure itself. And I depend more than I’d like to admit on the generosity of new friends, feeding us after a long day and sheltering us from the night.

This — a shaky hand-to-mouth existence — is what supports that exuberant grinning figure you’ve seen on national TV, in Time Magazine, in USA Today, and hundreds of other places. I never really understood the difference between public relations and marketing until now: CAA is a PR bonanza and a marketing fiasco. I have media coverage the average small company would kill for, but no standard products other than these weekly columns and a forthcoming book about my first 10,000 miles.

So that’s the plan for 1987: adding business survival to my long-established objective of fun. It’s not just an adventure, it’s a job! But there’s one subtle problem… my essential message is freedom — that you can accomplish anything if you want it enough, that risk is healthy, that your resources of intelligence are probably a lot deeper than you think. We have new technological tools to free us, new worlds to explore, and even a new population of people who cavort freely in Dataspace unconstrained by location, color, appearance, or education. Freedom. It’s an exciting message, and people easily relate to it in these days of urine testing, polygraphs, poorly maintained credit databases, economic pressure, horrifying new social diseases, and a resurgence of misguided puritanism. A whiff of freedom perks up the imprisoned like that first hint of morning coffee.

But try living as a public paragon of personal freedom within the bottom-line-oriented constraints of a marketing plan. There’s the challenge: treating this as a business without having it look like one.

Let’s close this week’s installment on a playful note, something that every reader can relate to. Something that touches us all deeply, evokes intense memories, and rouses strong feelings…

I floated easily in a nitrous fog, the Walkman pumping Bob James into my head, my wool-shrouded toes tapping in their well-worn Birkenstocks. Through half-closed lids I saw the needle approach my mouth and prepared to wince, flashing painfully on the closing scene of the movie “Brazil.” But the nurse tapped my arm, some kind of swabbed on local anesthetic numbed me, and I failed to notice the violation of my gums. So far so good.

Mega-numb — no way for me to transcend dental medication. I was calmed by the delightful gas but intellectually nervous, my normal dentist-chair panic elevated to a sort of bemused abstraction but still very much in evidence. I had never been to a painless dentist and didn’t truly believe them to exist… and he was probing a very large hole in a broken wisdom tooth, the subject of many a horror story.

Jazz swirled through my head; I heard the drill scream. It entered, rising and falling in pitch as it carved living tooth, raising a cloud of hot enamel-dust that shocked my nose as would my own burning flesh. Yet the sensation was of someone drilling into a block of wood lodged in my mouth: multiple smooth hands, the glint of stainless steel instruments, the suction tube, the detail of the overhead light, the smells of rubber gloves and faint perfume and powdered tooth… but no pain. Stunned, I waited for it — 5% of my brain quailing at each approach of the drill while the rest soared through the pure bliss of the Bob James Touchdown album and wanted the experience to never end.

And then the smells of solvents and sealants; the welcome poking and prodding that bespeaks an end to destruction and the beginning of reconstruction… and soon the vaguely depressing news that I had already been on pure oxygen for five minutes and did I feel normal again? NO PAIN. This had to be the most unusual Christmas present I had ever received: a gift certificate from Ken (of Trollo and Bionic Taco fame) good for “X-Ray & anesthesia with a filling or extraction” at the offices of Michael Holland, D.D.S. — and then to find the experience genuinely pleasant as well!

See you next week, from somewhere south of here. This time I really mean it.