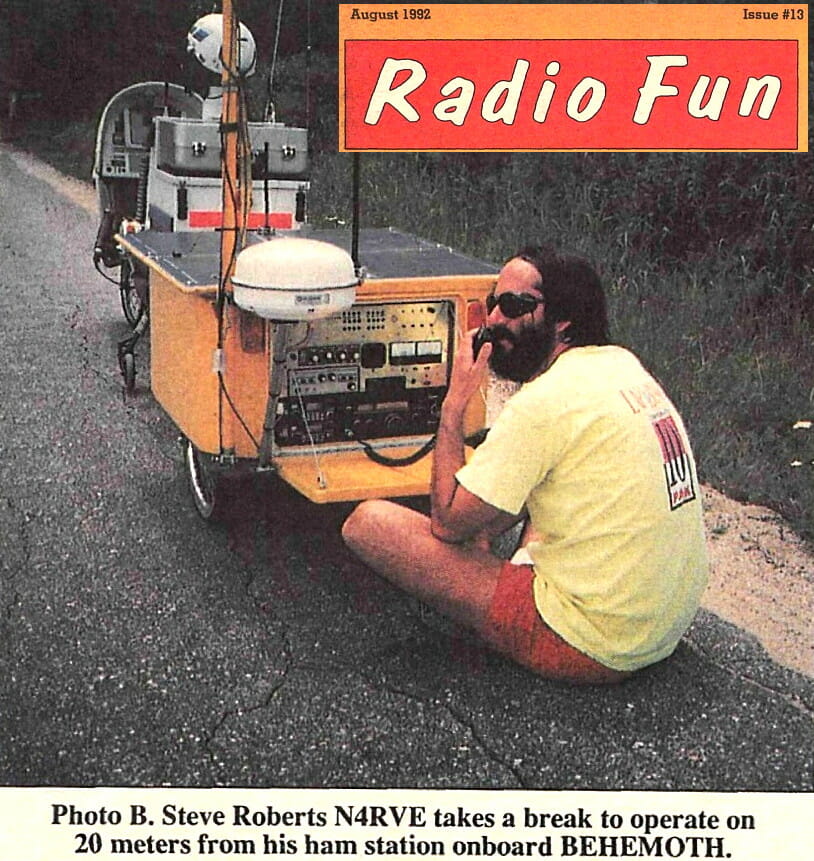 During my 1992 Mothership jaunt around the US, one of my fondest memories is an extended visit to Peterborough, New Hampshire… home of the the late Wayne Green (W2NSD) and his publishing empire, along with all sorts of interesting people. My old editor and friend from 73 Magazine, Bill Brown (WB8ELK), was running the spin-off Radio Fun tabloid, and he interviewed me for this story… and I spent a week or so at his house, learning about high-altitude ballooning and other interesting frontiers in amateur radio.

High-tech nomad Steve Roberts N4RVE (Nomad 4 Recumbent Vehicle Escapades) recently paid us a visit at the Radio Fun/73 headquarters. Inside his mobile office and workshop (called the Mother Ship) was his latest recumbent bicycle creation which he calls BEHEMOTH (Big Electronic Human Energized Machine . . . Only Too Heavy). Steve started his high-tech nomadic adventures with his first machine called the Winnebiko in 1983 and put in 10,000 miles of travel during the first 1-1/2 years. During 1986 and 1987 he logged over 6,000 miles, along with his companion Maggie Victor KA8ZYW, with his Winnebiko II (see the February 1988 issue of 73, page 11).

A result of 3-1/2 years of intensive work, the BEHEMOTH system consists of a 105-speed recumbent bicycle that carries a massive array of computing and communications equipment that allows him to write articles and books and to interface with the digital world while he rides across the country. Inside the front cover console he has a Macintosh with an LCD display which he uses for writing (he can write while riding through the use of a special binary keyboard in the handlebars), two IBM DOS machines, two UNIX-based machines: a SPARC IPC Sun workstation and a Tadpole SPARC SPARCbook laptop (guess this makes BEHEMOTH a UNIX-cycle!), a 2 meter HT (ICOM μ2AT), a PacComm packet station, an MFJ-1278 unit for AMTOR and a Trimble GPS (Global Positioning Satellite) receiver to pinpoint his current position. In addition, the console contains the audio distribution network and the BEHEMOTH central control computer complete with an Audapter text-to-speech processor. Altogether there are over 45 microprocessors total on the whole bike!

Behind the main bicycle is a trailer he calls the Wheeled Auxiliary Storage Unit (the WASU). This contains his ham station, the Solarex solar panel and battery system that powers everything and a Qualcomm OmniTRACS satellite station. The two-way satellite link allows Steve to directly tie into the Internet so he can receive or respond to his mail. The Internet consists of a massive network of inter-tied computers spanning the globe—Steve calls this environment “Dataspace.”

In the back of the WASU unit is a fully-equipped ham station which Steve operates during his journeys. The ham station consists of an ICOM 725 HF rig, Yaesu 290 and 790 rigs for VHF and UHF, an IC-24AT for the backpack and an AEA ATV station. A series of Larsen antennas are scattered on top of the solar panel array for VHF, UHF and his cellular telephone link. For HF, Steve has a very effective dipole constructed out of two Outbacker mobile antennas mounted on a telescoping Fiberglass pole.

Fully loaded, the BEHEMOTH bicycle and trailer weigh in at 580 pounds. Steve’s average cruising speed is about 9 to 10 mph, but he has had it up to 48 mph during some downhill runs. He has put in over 1,000 miles since the inaugural run during the summer of 1991.

If you’d like to find out more about high-tech nomadic adventures and technology, Steve publishes a quarterly magazine called Nomadness. It is a 50-50 mix of adventure and the technology necessary for full-time wandering. It’s available for $15/year from Nomadic Research Labs (contact info redacted).