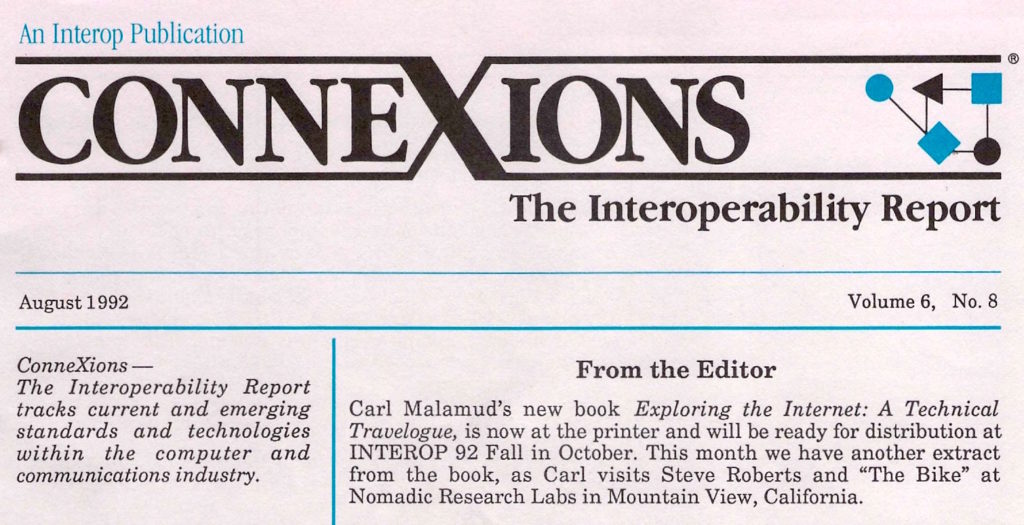 I always loved this journal, published by the folks who put on the INTEROP shows and tracking every detail of emerging Internet technology. This piece was by Carl Malamud, and was derived from his visit to my Bikelab at Sun Microsystems while researching his book, Exploring the Internet: A Technical Travelogue. (A new edition is here)

In the following issue, there is a short review of my book.

The Guy with the Bike

[Ed.: In this issue, Carl Malamud the Internet Explorer goes to Mountain View to talk to “The Guy With the Bike,” part of the three trips around the world Malamud is taking to research his next book. The result of all this travel will be Exploring the Internet: A Technical Travelogue, published by Prentice Hall and distributed to all conference attendees at INTEROP 92 Fall in San Francisco].

Saturday afternoon, I headed down to Mountain View, the home of Sun Microsystems. I was going to visit Steve Roberts, better known as “The Guy With the Bike.”

In 1983, Steve decided that a life of consulting and writing books on the subject of microprocessors was not for him. He tallied up the things he liked to do, and decided on a short list of writing, meeting people, and riding bikes. He sold his home in Columbus, Ohio and invested everything he had in a recumbent bicycle, an early laptop, solar panels to power his ham radio and other devices, and then hit the road.

For 10,000 miles, he kept on pedaling, going through Florida, the Rockies, the deserts of Utah and California, and the bleak desolation of San Clemente. On the way, he used CompuServe as his electronic mailbox and wrote articles for any publication that would send him money. The bike was certainly a natural conversation opener, helping to fulfill his most important ambition of meeting lots of people.

The original Winnebiko was only a couple of hundred pounds and had 18 gears. Over time, that original frame has grown to support 105 gears, 580 pounds, and an incredibly sophisticated collection of on board computers.

Sun Labs has loaned space to Steve to let him work on the latest incarnation of the Bike, known as “BEHEMOTH,” the Big Electronic Human-Energized Machine… Only Too Heavy. I reported to Sun’s building 4, and was met by Steve, a tall bearded man in his late thirties, wearing a “Peace” T-shirt. He led me through dark empty corridors to a locked door bearing a neatly labeled sign which read “Nomadic Research Labs.”

“Labs” is an understatement in this case. Under one of the desks is a futon and scattered throughout are signs that the lab is also a home. Walking in the first time, though, you don’t notice the futon, the flute, or the cereal bowl. Your eye naturally turns to the huge bike in the middle of the floor.

At first glance, you see a recumbent bicycle with a storage unit mounted behind the seat and an aerodynamic hood up front. Behind the bike is a trailer, covered with 72 watts of solar panels, used to charge 45 amp-hours worth of batteries.

Sticking up from the rear of the trailer is a big yellow pole which contains the ham radio antennas. The pole is six feet tall and can be extended to 12 feet for even better reception. Another antenna on the back is a little Qualcomm satellite dish, similar to what you would use on a delivery truck. Roberts keeps a Sun 4/260 at Qualcomm headquarters and runs 165 bps uucp-based transfers into the bike.

On the bike, there are a variety of different computers. A SPARCstation, a Mac portable, and a DOS portable have all been ripped apart and mounted into the bike. The screens are mounted on the bike console, with one screen flipping up to expose another. (Steve likes to say that this is “Mechanical Display Paging”).

Another laptop is in a carrying case that can be removed, allowing Steve to compute in diners and other places that the bike is not welcome. The carrying case is, of course, in constant communication with the bike.

The chord keyboard allows Steve to type at roughly 35 words per minute, not an optimal rate when you make your living being paid by the word. Once the keyboard controller generates characters, the data is sent to a macro package on a DOS machine which expands the data. Through careful use of macros, the data hitting the target computer appears to be a typist working at 100 words per minute.

The head mouse is the other major form of input. Three transducers are mounted on Steve’s helmet and they are used to sense an ultrasonic beam generated from the console. The resulting motion that is detected is fed into the controller of a Macintosh ADB mouse.

The helmet has a few other features to help the digital nomad. A 720 x 280 pixel red image floats in front of him on a little display mounted on the helmet and acts as a console. A heat exchange system built into an inner liner for the helmet acts as an air conditioner, using the refrigeration unit on the bike to cool fluids which travel up and remove heat from the helmet.

The helmet also has a little microphone on it which connects to a serial cross-connect bus. The bus can set up connections to cellular phones, the ham radio, or even the voice recognition unit on the bike. The cross-connect bus also links modems to serial ports and any other serial links that need to be made. The audio bus can handle up to 8 simultaneous events and the serial bus can handle up to 4 simultaneous events.

Just as the serial bus goes throughout the bike, so does a power bus. Power is distributed in a series of batteries. The main power is three 15 amp-hour batteries, plus there are various other special purpose batteries scattered about.

On sunny days, photovoltaic cells recharge the system. Additional power is provided by a regenerative braking controller, which transforms the heat generated by braking into power. If there are no hills and no sun, a cable connected to a car’s cigarette lighter will do the trick.

A Motorola 68HC11, programmed in FORTH, acts as the power controller, sending power where needed and monitoring usage. The controller will signal the main bicycle control unit when power is low, which in turn tells Steve so he can take corrective action. Two other 68HC11 controllers handle the serial and audio buses.

The audio bus allows sound output from many sources to be mixed. Two 4″ Blaupunkt speakers are mounted behind the driver and connect to an automotive stereo amp. Data from the CD player, the cellular phone, the ham radio, or the speech synthesizer can all be mixed. Steve carries over 100 CDs with him on the road, removed from their original packaging to save space and weight.

This entire contraption is now worth over $300,000 in parts alone. If you add time, it is easily worth over $1 million. Security naturally becomes an issue.

Security for the BEHEMOTH is provided on several levels. At the most basic level, a microwave doppler motion detector reports any motion within 8 to 10 feet. Other detectors signal when a person touches the bike or sits on the seat. A Global Positioning System (GPS) receiver on the bike hood reports bike movement and speed.

Different responses can be set to security events depending on the circumstances. The voice synthesizer can use the speakers to utter an appropriate phrase if somebody touches the bike, such as “do not touch, or you will be vaporized by a laser beam!” A siren can be activated, or Steve can be paged.

If the bike starts moving without a password, more drastic actions are possible. The wheel can lock, a call can be placed to 911 and the speech synthesizer can cry for help, the siren can go off, and, most effective of all, a wild-eyed digital nomad is automatically programmed to come bursting out of his tent in a frenzy.

The BEHEMOTH and its previous incarnations have attracted the media from the word go. CBS, USA Today, and even the trade press quickly realized that this was a story. Being “The Guy With the Bike” has made Steve instantly recognizable throughout the US.

For the first 17,000 miles of journeys, Steve simply wandered. An office manager at home base took care of things in return for a cut of the revenue.

Over time, though, Nomadic Research Labs has grown into quite a business. Steve publishes a “sometimes quarterly journal” called Nomadness and is in frequent demand on the lecture circuit, providing an interesting alternative for groups that can’t afford Oliver North.

To meet the demands of speaking engagements and trade shows, the bike now has a mothership, a large trailer pulled by a nice van. The bike goes inside the mothership and hooks up to the antennas, and a little console goes up in the front seat. The bike continues to be the communication hub, even though it is inside a trailer.

I thought that my three round-the-world trips for Exploring the Internet were quite a journey, but I felt like a digital dilettante compared to Steve’s wholehearted commitment. His lifestyle is different from that of your usual commute-to-cubicle engineer, but he has certainly proved that you can have fun and put together a technical tour-de-force at the same time.

I left Steve to drive up the peninsula to San Francisco to meet Ole Jacobsen, my editor at Connexions. Over a dinner of pasta with garlic, olive oil, and anchovies, we plotted how we could get Steve Roberts to pedal around the INTEROP show floor, hooking, of course, into the Shownet. How about remote SNMP bike management? A BEHEMOTH MIB? The possibilities were endless.

CARL MALAMUD has recently finished his world travels (at least for the time being) and settled down in Washington, DC. He is the author of several technical reference books, and enjoys many fine lunches and dinners.

Ed.: The bike is constantly evolving as new technology becomes available and is road-tested. Thus, any detailed description of the system is bound to be out of date by the time you read this. Next month: A review of Steve Roberts’ book Computing Across America.