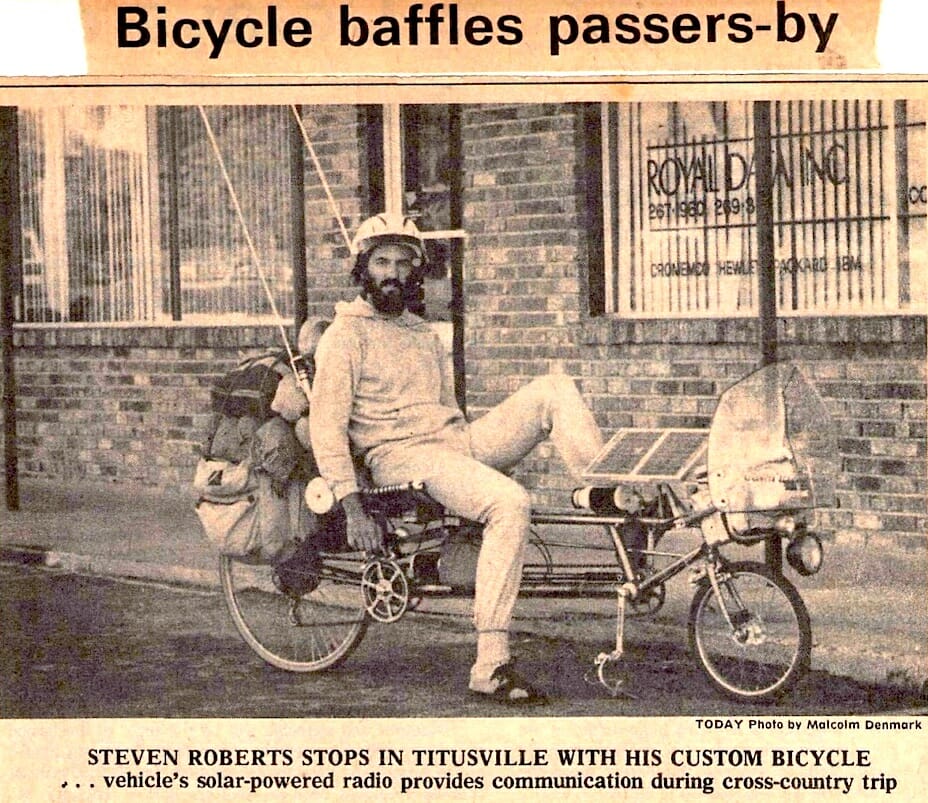 This was Christmas Day, and I was making the trek south to Key West to meet a network friend in what came to be known as “the ultimate blind date.” I was fortunate to have old friends in Titusville, and it was sweet to spend the holiday in their company before returning to the madness of the Florida coast highway and the New Year’s plunge through Miami. In this photo, I’m posing in front of my friend’s computer business… our connection was via my old S-100 bus computer from Cromemco.

Seated on a bicycle that looks more like a rolling lawn chair, and using a computer keyboard powered by solar panels, an Ohio man is pedaling across America and writing about his adventures.

The recumbent — or backward-leaning — bicycle with a 16-inch front wheel and 27-inch rear wheel includes its own power, radio and security systems — making it one of the most sophisticated two-wheelers around.

“I guess you could call it a one-year bicycle odyssey with a high-tech flavor,” the 31 year-old freelance writer said.

Roberts, who spent Christmas Eve with friends Jean and Jency Kelly of Titusville, should be rolling south on U.S. 1 this morning headed for Hollywood and Key West before traveling westward next month.

And for those motorists passing the bicycle today, be forewarned that the sight of it will definitely turn some heads.

The 8-foot-long contraption has two bluish solar panels, measuring 9-by-14 inches mounted on ball-and-socket joints so they can be aimed at the sun all the time. The panels provide power for lights, a security system and his trusty word processor.

The security system is a vibration sensor that gives off a signal whenever someone touches the bicycle. The signal sets off a beeper Roberts wears. He also keeps a citizens band radio on board in case he runs into trouble.

The computer terminal allows him to work along the way on the two books and several magazine articles he’s writing about his journey.

“I’ve always wanted to travel and work while I’m on the road,” Roberts said. “I guess I just got tired of the three-bedroom ranch house in suburbia. It’s definitely been an adventure.”

He was laid up temporarily with the flu in Gainesville. And he’s been visiting friends in different cities along the way.

Riding the two-wheeler, loaded down with a tent, sleeping bag and knapsacks, is no more difficult than riding any other bicycle and, in fact, may be more comfortable than normal bikes, he said.

“I can finish a 95-mile day and get up, stretch and go get dinner with very little discomfort,” Roberts said.

Roberts said he isn’t in a hurry to finish his trip, which he has dubbed “Computing Across America.”