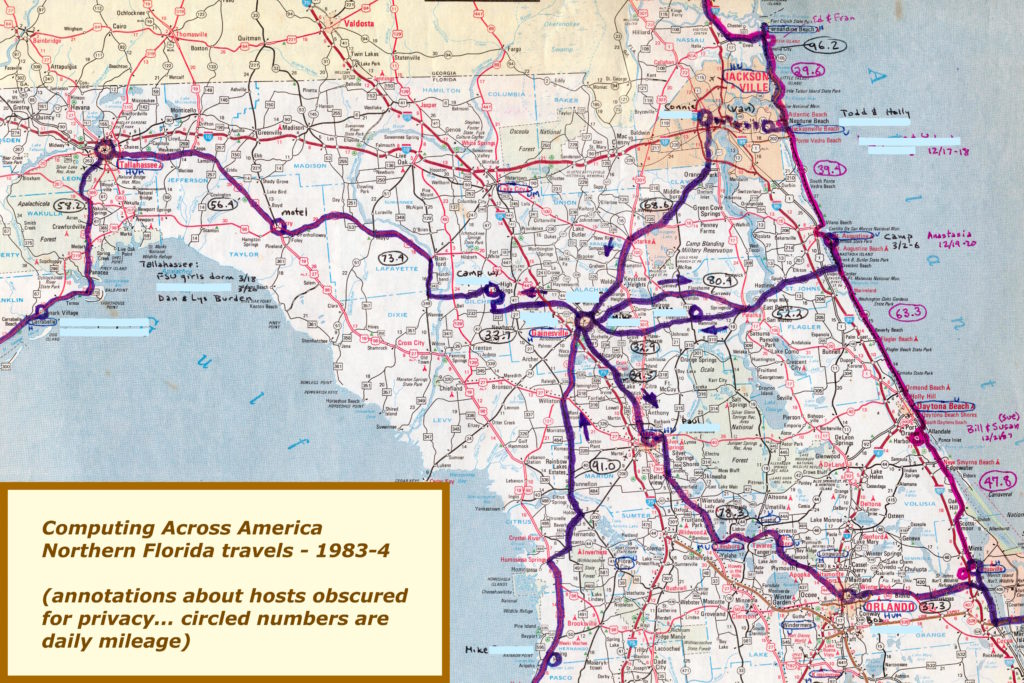 Fevers, in a twisted way, are kind of fun. This one was: I lay without responsibility, making irrational comments and easing open an aching eyelid now and again to watch Gram watch me. As Sylvia’s mother, she had been deeply involved in the traumatic circumstances of my “illegitimate” birth. Now her long-lost first grandchild had come pedaling sick to her tiny apartment, and she radiated a maternal concern as warm as the glow of the Ker-o-Sun heater toasting the room.

I drifted in and out of sleep, rather enjoying the perverse high of my overheated brain (people pay good money on the street for much worse). The heater sounded like a tiny distant chain saw over the breathing of five close cats, and in my delirium I wove it all into music — The Fever Sonata for Chain Saw and Kittentinuo, opus 104.3. I giggled and told Gram about it, making no sense whatsoever.

Then an erotic dream took me. I stirred at the sensation of soft hands caressing my face, of gentle fragrant breathing only inches from my ear. I lay on the floor in dizzy agitation as long, soft black hair fell against my neck, and imagined looking up into the depth of my new cousin’s eloquent eyes. Her lips were parted, moist; every detail of her face perfectly delicate yet cast into sharp relief by the fever. Gently sweatered curves rose and fell on the periphery of my vision. I felt the heady warmth of her lap under my head. Ah, sweet cousin Sylphide… you do make a fine dream.

I savored the fantasy, then began to wonder if my eyes were open or closed. I blinked to test them, and glanced around the room. There was Gram a mile away on the couch, watching with a look of deep kindness. Puzzlement must have crossed my face, for Sylphide gave me a reassuring smile, squeezed my shoulder, and said hello.

The moment was so perfect that it became etched into my memory every bit as vividly as The First Time. It took less than ten seconds for us to fall in love.

It was the spark that did it. Some might say it was just the fever, but there was another kind of fire in our eyes. It was recognition: the mutual understanding that we were of like passions. Somehow, through a sense people have but seldom acknowledge, this awareness can be communicated through the merest instant of eye contact.

It’s a reliable way to discover friends (you don’t make them, you know — you find them).

Standing on a California beach, I am startled time and again by beauty — but if eye contact fails to reveal the spark, my perception shifts within seconds. I might still lust and moan, but it’s with a sort of one-dimensional appreciation. Not magic.

With Sylphide, it was all of the above. She escorted me to her bedroom, tucking me in and bringing a tray of soup and crackers to fuel my fevered body. She moved in and out of my awareness: music, gentle touches, soft voice, desire without urgency, and long, long hair. I slept and woke, woke and slept, the boundaries between mental states vague. She said something about a Christmas party and disappeared in a flash of red velvet and silken black hair.

Night. The Roches sang me awake — quietly, in the background. Tipsy from the party, Sylphide twinkled at me; I stretched naked under blankets fragrant with her scent and watched, fascinated, as she moved about the room. I remember with potent clarity the gazes, the sharp intakes of breath, the first kisses, the falling away of covers and the electric touch of hands and hair… the sweet beginning. With surpassing gentleness we touched, awed by each other. My skin was hypersensitized by two kinds of fever, and our union was nuclear. The fallout continues to this moment, and — years later — I dance with trembling fingers upon these keys.

The days passed in a confusion of love and delirium, each adding to the other. There was considerable spice and naughtiness in our involvement: this was my bio-cousin, even if we had just met, and she was, after all, living with her parents. We checked into Gainesville’s notorious Bambi Motel for champagne and pizza, and she called in sick the next two days to allow maximal use of our precious, dwindling time together. Yes… the road was tugging at me. The road!

There’s an insanity about it, I know. Here I was, surrounded by love on many levels with Christmas only days away. I was sick, I had work to do, and I was living for free at a time of financial crisis. Yet my stupid tires itched! Sylphide would look at me with the total vulnerability of new love, and ask plaintively, “Why do you want to ride your bike in a big circle, anyway?”

I could never articulate a satisfying answer. But it was the unknown that drew me — I had barely begun to scratch the persistent itch of restlessness. It was the alluring unknown of Florida, the long unknown of the highway… and the emotional unknown of a looming blind date.

Personal Note: I look back now, 35 years later, and shake my head with Deep Regret at this clumsy heartbreak. But there was more to it than being a young horndog, freewheeling down the road with “a girl in every port.” 1983 was a time when life online was a world apart, disconnected from reality, the boundaries distinct. While I sensed the obvious impossibility of the situation, it was as if I were two different people… though of course those would inevitably collide.

A couple of weeks earlier, I had been writing an article about online information retrieval. The story featured a new breed of consultant known as the “information broker,” and even though I had done a little of that myself, I decided to interview a professional.

Barbara was the research director of a West Coast firm specializing in such matters. We established contact via electronic mail, but as I was interviewing her over the telephone I sensed a dazzling intellect. She was a long-distance cyclist, a pianist, and a fellow information junkie — our conversation sizzled like a drop of water on a hot skillet. A few days later, when she signed her first book contract, I wired her flowers. We began communicating twice a day — electronically building a network love affair even while a real love was growing in Gainesville.

And they occupied such different parts of my brain that I hardly thought it odd.

But Barbara and I had made a date. She was scheduled to fly to Key West from Berkeley, and I was to pedal the 553 miles from Gainesville. We would rendezvous at the airport and spend a week in paradise. Despite the bliss of my time with Sylphide and the need to regain my strength, I stared at my atlas with frantic restlessness and pored over my list of contacts with obsessive concentration. Three days before Christmas, I left.

Sylphide joined me for a painful breakfast after I packed the bike and filled the water bottles. She looked at me sadly, understanding but not accepting; I gazed back and attempted to speak — to try, somehow, to explain. But it wasn’t even clear to me.

I just had to be back on the road.