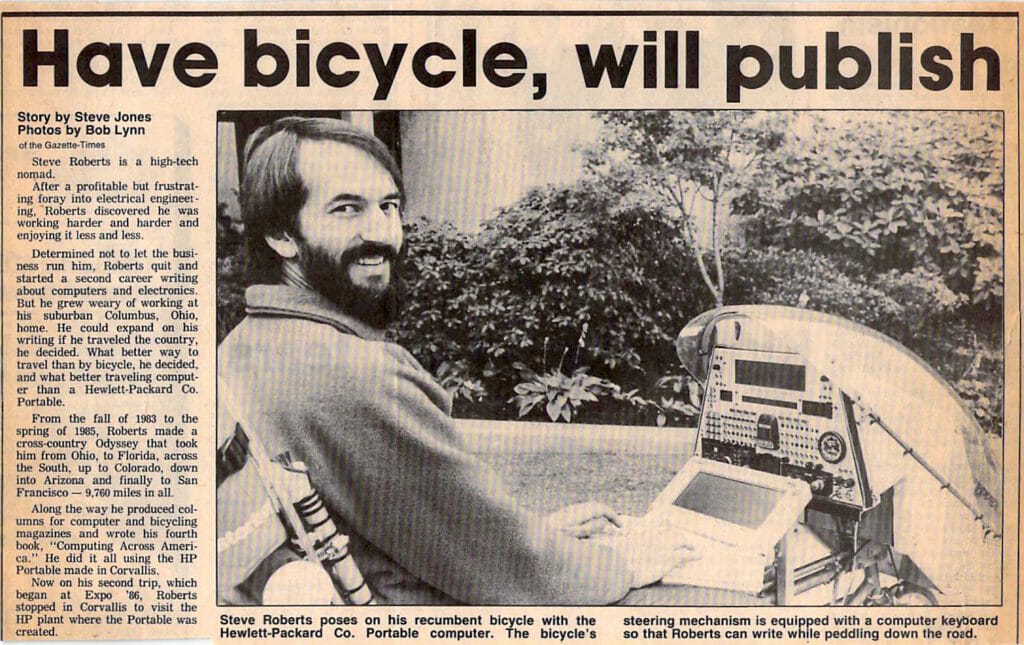 Steve Roberts is a high-tech nomad.

After a profitable but frustrating foray into electrical engineering, Roberts discovered he was working harder and harder and enjoying it less and less.

Determined not to let the business run him, Roberts quit and started a second career writing about computers and electronics. But he grew weary of working at his suburban Columbus, Ohio, home. He could expand on his writing if he traveled the country, he decided. What better way to travel than by bicycle, he decided, and what better traveling computer than a Hewlett-Packard Co. Portable.

From the fall of 1983 to the spring of 1985, Roberts made a cross-country Odyssey that took him from Ohio, to Florida, across the South, up to Colorado, down into Arizona and finally to San Francisco — 9,760 miles in all.

Along the way he produced columns for computer and bicycling magazines and wrote his fourth book, “Computing Across America.” He did it all using the HP Portable made in Corvallis. Now on his second trip, which began at Expo ’86, Roberts stopped in Corvallis to visit the HP plant where the Portable was created.

“If you use a Portable,” Roberts explained, “over time Corvallis becomes a sort of Mecca.”

Roberts may have come to pay homage to the holy land of the Portable, but it was Roberts who was the object of admiration.

The Portable Plus is a self-contained computer that weighs under 10 pounds, has the power of a desk-top computer, yet operates on batteries for up to 20 hours without recharging.

On his first trip, Roberts discovered that some of his best ideas came to him while riding. But often he would get to his camp or hotel and lose the inspiration. He had to write while riding to make the best use of his time, Roberts decided.

Combining his knowledge of electronics, bicycles and engineering, he built a solar-powered computer into his bicycle that allows him to type while riding. It is a binary system, controlled with eight small buttons — four embedded on each side of the bicycle’s handlebars. The eight buttons give him 256 possible combinations of key strokes — more than enough to create the alphabet and control functions needed for typing. The computer, its screen and other controls are mounted over the front wheel. At the end of the day, he unloads the writing from the handlebar computer into an HP Portable Plus for editing and transmission over telephone lines to his publishers.

And that’s not all. Roberts built a speech synthesizer into his handlebar computer that can be programed to explain the system to curious passersby. It has a security system that alerts him through a beeper when someone tampers with the bike. And there is a 2-meter radio system that allows Roberts and traveling companion Maggie Victor keep in touch.

It is all mounted on a custom-built recumbent bicycle with 36 speeds. It cost about $17,500 to build.

“He’s the most exciting thing I’ve found in a long time,” said Victor, who met Roberts in a Columbus, Ohio, bar. Roberts was typing letters on his HP Portable at the time. HP’s portable products have had a profound influence on Roberts’ life.

Victor’s bicycle is radio equipped, but it has no handlebar computer. She publishes a biweekly column in her hometown newspaper, the Marion Star, published in Marion, Ohio.

Together, Victor and Roberts travel the nation writing and meeting people — and they do meet a lot of people. Make no mistake. A computerized bicycle that talks draws a crowd anywhere.

One afternoon while Roberts was stopped at a roadside telephone transmitting a story, a local resident drove by in a pickup and stopped, Roberts recalled. While Roberts worked, the man sat watching and spitting tobacco out the window. Finally he came over to Roberts and asked: “Are you with NASA?”

The memory still makes him laugh. “Yeah,” Roberts said. “This is a loonie excursion module.”