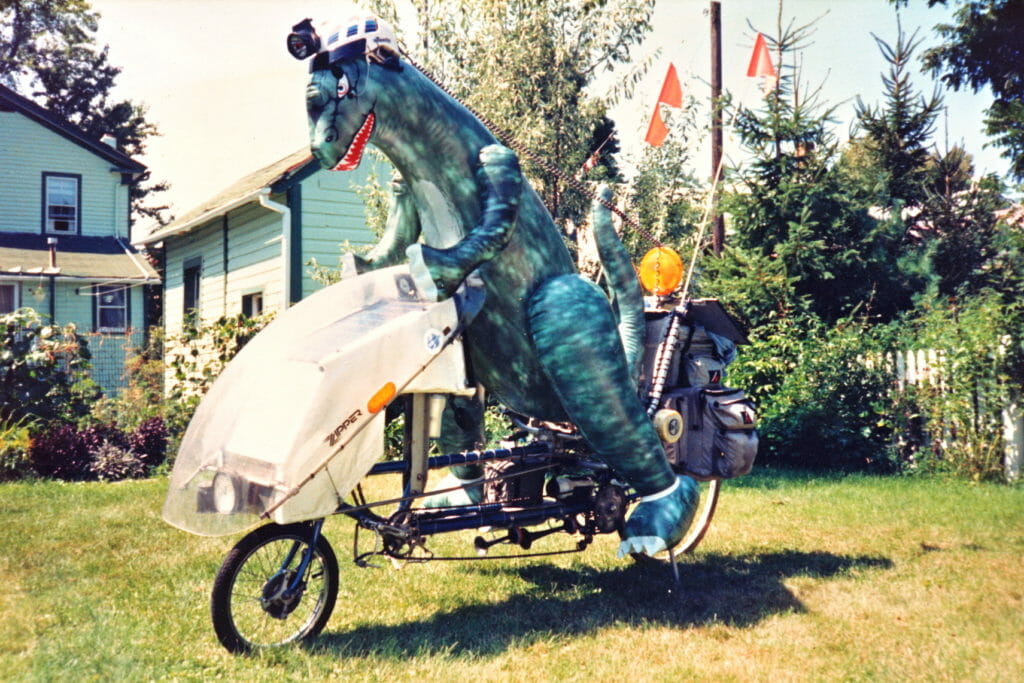 It’s odd sometimes, living this lifestyle sampler. In Salem — after a brutal 55-mile day of headwinds, rain, and shoulderless darkness — we settled in with a delightful couple who had sent an electronic invitation via CompuServe over two years ago. Huddling in a phone booth, I queried my database for contacts; within the hour we were warm and dry, blinking in the light, legs quivering from one of our hardest rides yet and bodies numb from exhaustion.

Before long I was alone in the house — as Maggie, David and Lois went out to shop for Halloween dinner. I wrote quietly by the woodstove, jumping up every sentence or two to hand carob-coated fruit crunchies to the costumed children of a town I’d never seen. Unlike the mischievous rampages of my own childhood, this night was tame, almost depressing: every group was shepherded by a bored but watchful adult, waiting on the sidewalk with a flashlight. Some people, it seems, have found it amusing to give poison to children. The holiday continues, emasculated.

This is strange. Everything is strange. As I step outside of society (yet move intimately within it), American behavior seems progressively more bizarre until I find other humans at least as fascinating as they find me. Lift yourself out of your normal context and think about a few things for a minute — as if you are studying an alien culture…

When viewed from the perspective of an incoming starship, in fact, much of human behavior seems absurd — even though there is no serious shortage of intelligence, creativity, awareness, and love.

Somehow, living on a bicycle intensifies all this. My little starship — my Loony Excursion Module — is connected yet unconnected, a rolling platform from which to view the world at close range. And the closer I get, the more remote I feel. Do you see why I keep calling this strange, even though it has become my normal life?

In other news: The ride from Salem to Corvallis was flawless — 42 miles of a cool, sunny tailwind; good conversation on the radio; energetic music (Level 42) on the cassette deck; perfect. We arrived under a peach-colored sky show, the afternoon sun setting autumn foliage ablaze over a campus still sleepy from the aftereffects of Halloween night (college style). We meandered about until dark, then headed for the home of our first hostess.

Waiting to cross a street, I fell over. Now, this is not my usual style, nor is it considered healthy behavior on a machine that weighs about as much as the average medium-sized Honda. As I struggled to wrestle it back up, the handlebars fell off.

My life was suddenly immobilized — with no repair part available anywhere in the world. I sat by the road in the dark and stared numbly at the fractured bearing mount, machined long ago from an inappropriate chunk of cast aluminum. This would take a machine shop, a hunk of 6061 or 7075, and someone deft with a mill. Lacking all three in this unfamiliar town, we parked the bikes and strolled to dinner at Nearly Normal’s — a place that conjured 60’s images while tickling the palate and pleasing the ear with classical guitar. I needed a break.

Oregon is an interesting place. People seem alive, involved, interested in others. Perhaps that has something to do with the demographic filtering that results from my bizarre appearance, but the net effect is easy connection — and before long we were standing in Griffo Brothers Ironmonger Works, a garage shop par excellence, watching Mark the metal wizard at the helm of his Mazak numerically controlled milling machine. Color graphic definition of my steering part in, finely-honed aluminum out. Ain’t technology wonderful?

Rolling again, we spent two days with Hewlett-Packard, the reason Corvallis had come to seem a sort of mecca. Media, brown-bag lunch with 200 employees, still more new friends. And when the Portable was taken away for upgrades, the lobby suddenly felt like a hospital waiting room: we sat in our little sea of clutter, clad in T-shirts and sweats, catching up on correspondence and looking up expectantly every time someone in a tie walked through the room. “How is she?”

We’re in Eugene, now — getting ready for the 96-mile mountainous ride (with no services) that will land us on the coast. In the meantime… still more new friends, still more bike tweaking, still more adventure and food and rain and coffee and conversation. Always the same, always completely different. This is the texture of our life, the internal decor of a Winnebiko.

And the next time you hear from me, it will be from the Pacific.

Posted in Miles with Maggie
← Have bicycle, will publish – Corvallis Gazette-TimesFlying on the Coast →