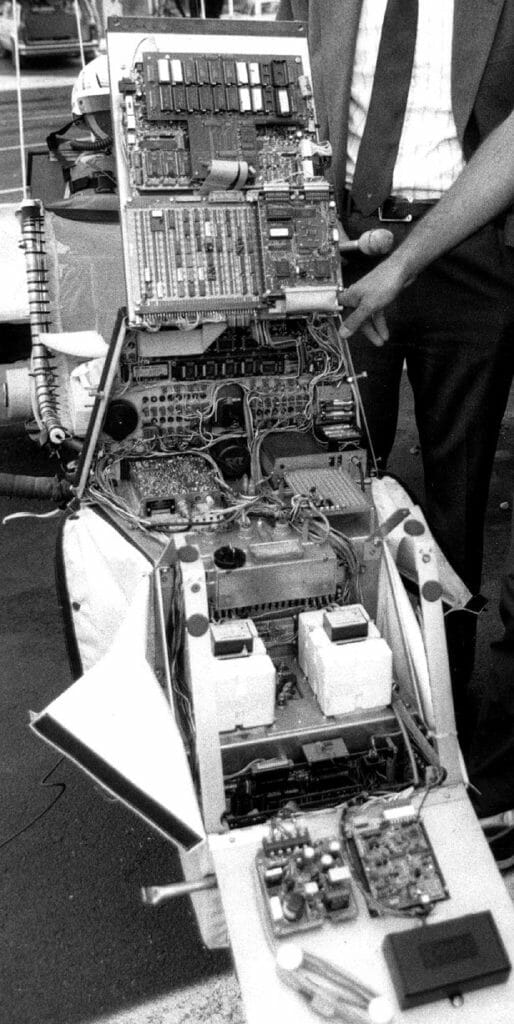 Seventy-eight hours and counting fast. It’s Friday morning, 3 A.M., and I think I’ve become asynchronous with respect to the rest of the world — working all night and sleeping until the phone rings (as it always does, too early). I’m tired, puzzled over a couple of design problems, and in no mood to write. If there’s any art at all to this installment, it’s the art of spontaneous invention, not that of a concentrated quest for the exquisite transcendence of a well-turned phrase.

Yes, the exhaustion is gripping. But I’m savoring these last few hours of stability — of knowing where I’m going to sleep every night and having a pretty good idea of who my local friends are. It’s not like that on the road, you know; on the road, stability is something you find in your packs. The coffee’s always right there in the outer pocket of the kitchen pannier next to the spare candles… the logic probe and digital multimeter live just inside the forward access panel… the micro-TV is tucked in with the HP system… and I commute to work through the wonderfully familiar electronic window that opens wide whenever I type a string of arcane digits. Kind of bizarre, isn’t it? I feel like a Gary Larson cartoon, living so many contrasts and reversals that even trimming my mustache is sometimes absurd and thought-provoking.

Life is as it should be: there are no boundaries between sweat and wizardry, work and play, computers and bicycle transmissions. I’m living in no-mode land.

Actually, an interesting effect of this wandering life is the profusion of homes that develop, metaphorical electronic ones aside. There’s one here on Bainbridge Island, this place isolated enough from the Big City to be both efficient and relaxed. Maybe someday (like I told myself in Austin, Key West, Santa Fe, Crested Butte, Telluride, Santa Barbara and a few other surprise places) I’ll come back to live for awhile. Yeah, I’ll come back, park the bike, find a house, start a consulting business, and dovetail socially with all these delightful folks I’ve come to care about over the last month…

But home doesn’t work like that when you’re a nomad: I’d go crazy in less than a year. For once you taste the energy of beginnings, middles are never quite the same.

I went for a test ride today after finishing the new console mount (the old one, after only 400 miles, was beginning to fracture). Sleek, waterproof, and free of rattles I whisked along, making my first attempt at on-the-road typing (sloppy but rather thrilling… technically speaking). I smiled at joggers, waved at drivers, and stopped to chat with the kids. And it started to happen — that sweet, slow metamorphosis from deadline-driven madman to wanderer, nomad of the spirit. I rode along, slowly keying ASCII in time with my cadence, sweating in my Patagonia under a clear cold sky, almost managing to be more aware of my surroundings than the subtle interplay of microprocessors spinning in synchronous wait loops and dancing at my touch.

(The software’s synthesized voice message on startup has been: “I am the Winnebiko control system, version 7. Are you ever going to ride me, Steve?”)

You bet, my little Bikeasaurus — in 77 hours. Ticks of the clock are taking on heavy meaning, and the bike stands over there poised, a thing of promise laden with significance, the result of all my time and resources for over a year. “How much did that cost?” the kids always ask. “All I had,” I answer, trying to imagine a number, seeing the insights and specialties of friends reflected from end to end. But the task now is to lift my eyes from the machine and see what I’ve set out to see — to switch this bizarre contraption from foreground to background, from obsession to tool. Only then will the journey have meaning.

Ah, off to bed — I can’t even focus my eyes, much less my mind (had I ever given this much of myself to a job, I’d have my own corner office by now). The next time you hear from me, it will be from somewhere… out there…