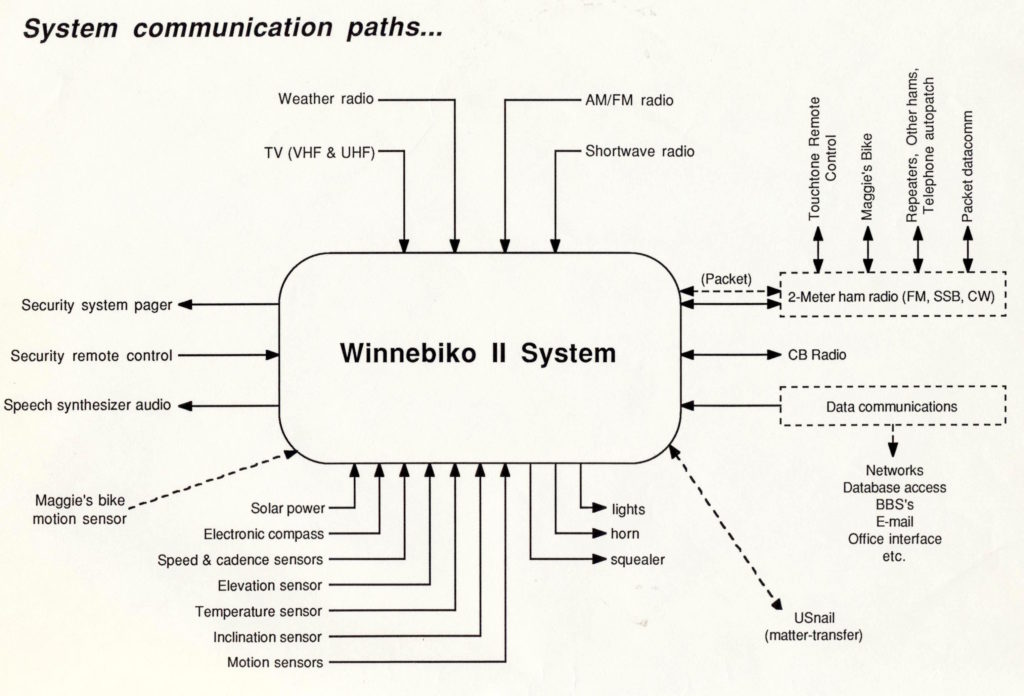 I’m into it now. Around me people are planning send-offs, media events, pot-luck parties. New friends, both the sorrow and delight of travel, drop by to play music or swap stories. And this place in the woods, the last for a long time to be so familiar that I know the light switches and shower knobs, is taking on that patina of clutter that turns a place to crash into a home.

But I seem not to notice. Somewhere on the fringes of my awareness, life goes on. Phone calls, Email, endless coffee, the daily business of my hosts. Meals appear, then vanish; Maggie gazes at me across the table with love and concern and asks, “how’s it going?”

“Well, I think the inrush to the speech board is trashing the HC11 logic when the MOSFET turns on… I don’t know, there must be too much inductance in that wire and maybe I need to run the damn thing in its linear region. Confuses the hell out of me — why can’t the world just be digital? I’m nested 3 or 4 levels deep again — last thing I knew, I was trying to get that serial crossbar network fired up and got sidetracked. But at least the 100 interface is finally OK: I got it running on autostart and it’s passing a new column of SIMUL keys from the handlebars.” Pushing back my chair and gulping coffee, I run to the next room to dig for the tattered blue software folder, buried within hours under piles of databooks and hardware clutter. I run back in and lay the annotated listing on top of her spaghetti squash.

“See, it spends most of its time up here in the executive…” I begin, but her eyes are soft and her fingers are on my arm and she’s not thinking about logic at all. I pause. “Did I show you how the lookup table works?” I begin again, feebly, but she shakes her head and kisses me. I’ve been at this too long. Some people do this for a living, you know, and never recover.

But I surface occasionally, long enough to play the flute or frolic in the woods — long enough to catch brief glimpses of the life of adventure that is only days away. Days away? It seems abstract as I stare into the depths of the system… isn’t making all these computers hum smoothly (just to each other, not to the radios) in the critical path to bicycle touring? Just ten more days, just ten more days of going mad with frustration and muttering arcane snippets of logic lingo to a remarkably patient Maggie.

She’s obsessed too, of course. Maggie’s never done this before; I have. She sews waterproof fabric into bizarre shapes, packages foods into Ziplocs, grapples with wiring till the tears flow, and worries over the road-worthiness of her untried machine. In a way this is still an experiment for us — I plucked her from stable small-town environs, helped her spend all her savings, whisked her 3,000 miles away to a machine shop in the Washington woods, and told her to pack everything that matters to her onto a bicycle. Tentatively, she tries her hand at changing a tire, and I realize that we both need patience.

Ah, we’ll find out soon enough. In the meantime, it’s getting colder here, snow down to 4,000 feet in the Cascades, trees in full autumn glory only 150 miles north of the border. People are telling me more and more frequently that it’s time to head south, and they’re all wearing down vests. Hmm. But I still need to calibrate the packet board, make the compass software work, fix a charging problem, reinforce the console support, build a mixer amp, cable the helmet, get 1200 pages of documentation microfiched, design the touch-tone encoder, install the rear solar panel, mount the flute, improve the brakes, etcetera, etcetera, etcetera. Worse than a damn house, worse than a damn car, worse than a damn job. But it’s more fun than any of ‘em.

Short chapter this week — aside from filming with Evening/PM Magazine and CNN, I’ve done little other than work on the machine. I really wouldn’t mind telling you about it in excruciating detail, but I’d have readers whacking BREAK keys all across the land. That wouldn’t do at all.