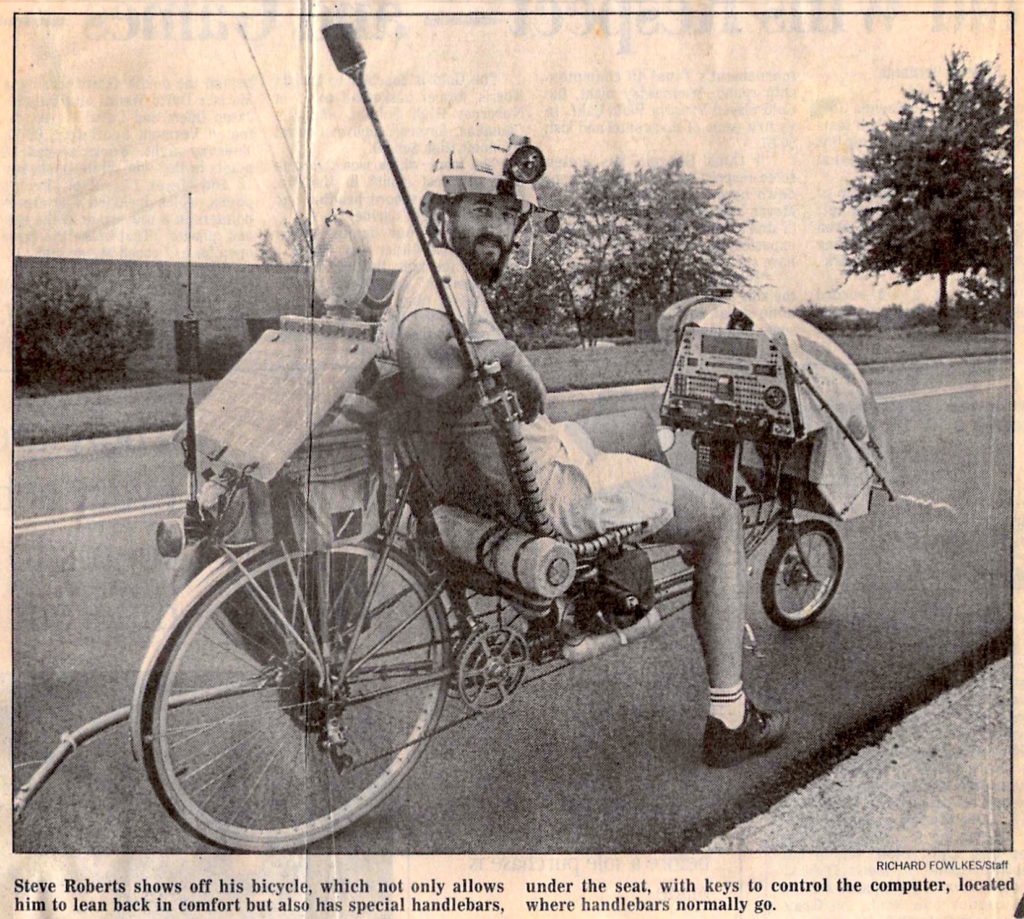 This coincided with a major event… stopping by Atlanta to visit Oki, which donated a 491 cellular phone. This was very new technology, and for a while it was mounted just below the console of the bike. But as BEHEMOTH developed, it was completely integrated and computer-controlled. Much more about this is in my Cellular Business article. The media loved the idea of a cellular phone on a bicycle… it changed everything. This CNN story was aired during the visit with Oki.

Steve Roberts travels around the country on a bicycle that boasts a computer, solar panels, a fax machine and a cellular phone. He was in Gwinnett getting the telephone hooked up, so he can send his publisher stories he has written while he pedals along.

Steve Roberts almost certainly was the only person in Norcross Tuesday who was riding a bicycle equipped with a cellular phone and a fax machine.

The former Ohio resident decided several years ago he wanted a job that would let him to do all of his favorite things all of the time.

So in 1983, Roberts sold his house in Columbus, Ohio, bought a funny-looking bicycle with a comfortable seat, outfitted it with a computer and a ham radio, and set off to roam the country.

The “high-tech nomad,” as he calls himself, has been riding around on his bike writing freelance articles and books about his personal and computing adventures ever since.

The telephone, donated by OKI Telecom, was fixed proudly to the stem of the bike. Waiting for Quadram Corp. to set up a tiny JTFAX machine for him, Roberts was playing with another gadget, a computer map of the United States, donated by yet another Norcross company, Geovision Inc.

When he began life on the bike, Roberts wrote on a lap-top computer during breaks. He discovered, however, that he was forgetting lots of important ideas while he was riding.

Ever resourceful, he built himself a computer that fits on the bike so that he can write as he rides. Eight computer keys are planted into the handlebars, which are located below the seat, and Roberts uses a self-invented binary code of different combinations for different letters and numbers. The screen sits right in the middle of what would be the handlebars on an ordinary bike.

Roberts seems to have succeeded in his unusual quest. He claims to be writing articles for more than 100 computing, bicycle and travel magazines, as well as occasional newspaper pieces, and has just published a book, Computing Across America: The Bicycle Odyssey of a High Tech Nomad.

People invite Roberts to spend the night or he camps when he decides to stop. According to his book, he spent most of those nights with women who invited him home during his 1983-’85 trip. But for the last 6,000 miles of this trip, Roberts has been joined by Maggie Victor, 36.

Ms. Victor, who carries a laptop computer and a ham radio on her recumbent bike, worked for a social service agency in Columbus before she became Roberts’ “lifestyle maintenance manager.”

“That means I do whatever is necessary to make life more enjoyable like cooking, cleaning, accounting, correspondence,” Ms. Victor said of her role in the business.

Until now, Roberts had to stop at pay phones or houses to send his copy via a telephone modem. But with the telephone and the fax machine, the bike is a completely self-sufficient “office.”

“Now I can type an article and send it to my publisher with out ever having to get off the bike,” Roberts said.

Roberts said he and Ms. Victor live on less than $1,000 a month. Their biggest expenses would be building and keeping up their computer equipment, but Roberts gets around that by contacting different high-tech companies when he needs a piece of equipment.

He offers to test the piece on tougher terrain than most office equipment will ever see. And he volunteers to get the company some publicity along the way.

“I’m still running a business,” Roberts said. “It’s just that rather than doing what most people do — which is to work at a job they don’t like to earn money to pay for the things they do like — I hit the road.”