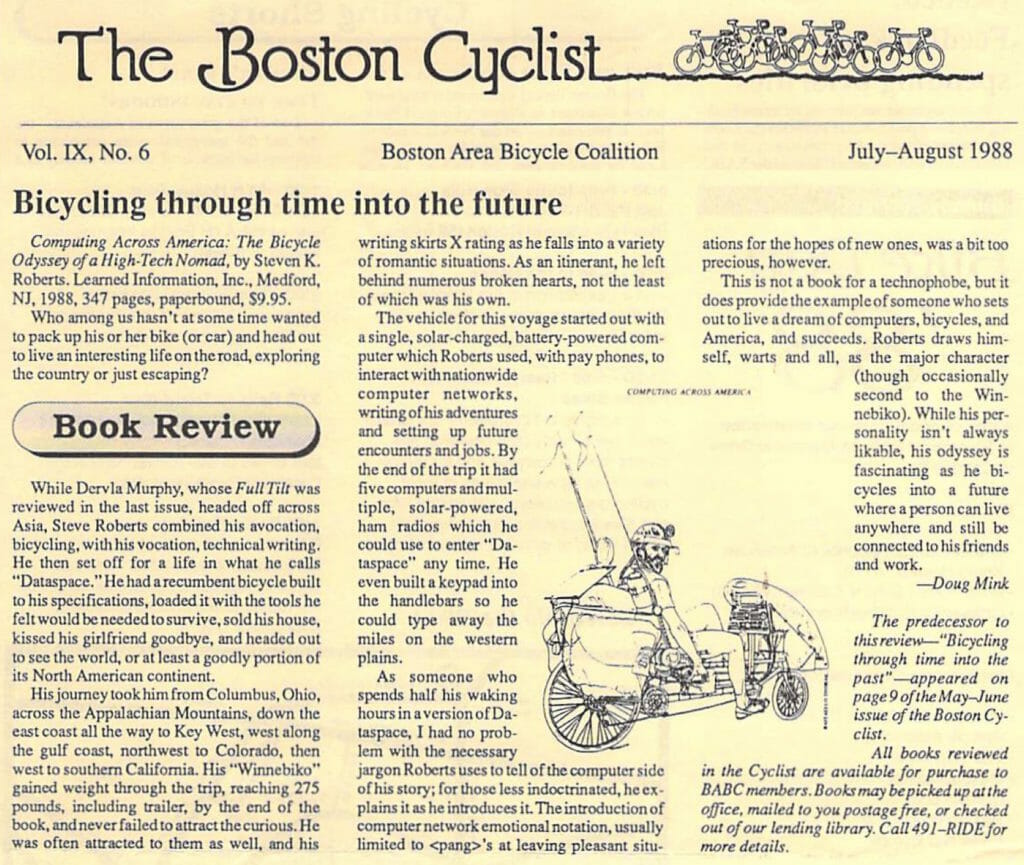 Who among us hasn’t at some time wanted to pack up his or her bike (or car) and head out to live an interesting life on the road, exploring the country or just escaping?

While Dervla Murphy, whose Full Tilt was reviewed in the last issue, headed off across Asia, Steve Roberts combined his avocation, bicycling, with his vocation, technical writing. He then set off for a life in what he calls “Dataspace.” He had a recumbent bicycle built to his specifications, loaded it with the tools he felt would be needed to survive, sold his house, kissed his girlfriend goodbye, and headed out to see the world, or at least a goodly portion of its North American continent.

His journey took him from Columbus, Ohio, across the Appalachian Mountains, down the east coast all the way to Key West, west along the gulf coast, northwest to Colorado, then west to southern California. His “Winnebiko” gained weight through the trip, reaching 275 pounds, including trailer, by the end of the book, and never failed to attract the curious. He was often attracted to them as well, and his writing skirts X rating as he falls into a variety of romantic situations. As an itinerant, he left behind numerous broken hearts, not the least of which was his own.

The vehicle for this voyage started out with a single, solar-charged, battery-powered computer which Roberts used, with pay phones, to interact with nationwide computer networks, writing of his adventures and setting up future encounters and jobs. By the end of the trip it had five computers and multiple, solar-powered, ham radios which he could use to enter “Dataspace” any time. He even built a keypad into the handlebars so he could type away the miles on the western plains.

As someone who spends half his waking hours in a version of Dataspace, I had no problem with the necessary jargon Roberts uses to tell of the computer side of his story; for those less indoctrinated, he explains it as he introduces it. The introduction of computer network emotional notation, usually limited to <pang>’s at leaving pleasant situations for the hopes of new ones, was a bit too precious, however.

This is not a book for a technophobe, but it does provide the example  of someone who sets out to live a dream of computers, bicycles, and America, and succeeds. Roberts draws himself, warts and all, as the major character (though occasionally second to the Winnebiko). While his personality isn’t always likable, his odyssey is fascinating as he bicycles into a future where a person can live anywhere and still be connected to his friends and work.

The predecessor to this review — “Bicycling through time into the past” — appeared on page 9 of the May-June issue of the Boston Cyclist. All books reviewed in the Cyclist are available for purchase to BABC members. Books may be picked up at the office, mailed to you postage free, or checked out of our lending library.