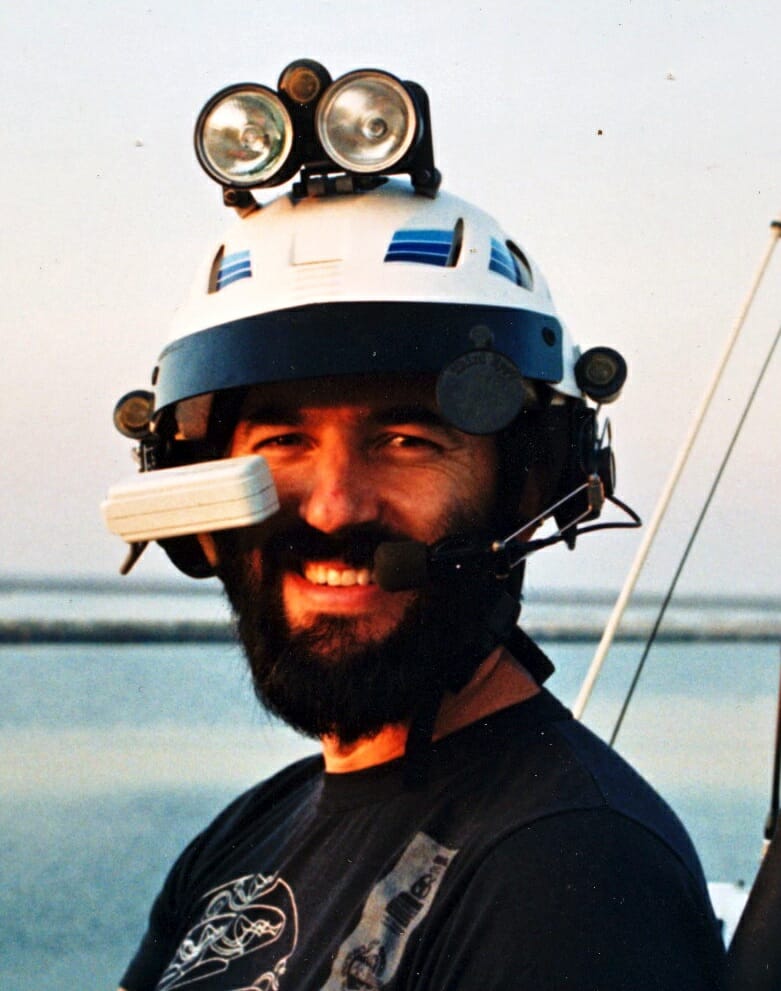 One of the most visually distinctive components of the BEHEMOTH bicycle system was the BIU, or Brain Interface Unit. This was based on a Bell Tourlite helmet, and included a head-mounted display, three ultrasonic sensors for cursor control, stereo and communications headsets, boom microphone, spot and flood lights, rear-view mirror, and a fluid heat-exchanger to help cool my body. I had a bit of fun writing about this in the old Nomadness journal (issue #9, Fall 1990), and that geekily baroque text is below… along with a schematic and a few other technical details. This helmet, along with the bike, is now on display in the Computer History Museum. It was the feature image in a MAKE: Magazine article about Google Glass and related hacks.

On the road, BEHEMOTH’s bio-controller is always embedded in its modified Bell Tourlite shock-isolation shell, interfaced through visual, aural, and kinesthetic channels to on-board silicon-based systems.  I’d like to give you a brief overview of BIU functionality…

Naturally, every effort has been made to maximize communication bandwidth with the neuron-based system inside the flesh-shrouded head assembly.  A 720 X 280-pixel display presents an apparent graphic overlay upon the system’s binocular view of the world, spectrally peaked at 720 nanometers to minimize any ambiguity with reality and adjustable in apparent focus to minimize attention-switching stress.  A second visual sub-window is provided by a circular optical reflector mounted on the solar attenuation shield, giving the controller a steerable view of conditions aft.  Optional polarized filters can be installed under conditions of high solar flux, softening specular reflections while diverting airflow-borne particulates from the moist and delicate components of the image-acquisition optics.

Both of the rider’s aural channels are coupled to transducers that allow reception of synthesized human language, long-range bidirectional RF communication with others of the same species, alert messages, or any of a number of laser-extracted cross-interleaved Reed-Solomon digitized stereophonic wavefronts selected for relaxation, stimulation, motivation, or subjective time-compression purposes.  Note that these transducers are of limited bandwidth, but can be augmented by miniature units inserted directly into the auditory canals, or alternatively by high-power acoustical drivers located behind the entire brain packaging system.  Wetware-initiated lexical utterances are converted into analog data by a boom-mounted input transducer, and are coupled through the audio crossbar network to speech recognition, recording, or communication subsystems as required.

Due to the human visual system’s insensitivity to infrared and other useful wavelengths, the BIU incorporates powerful parabolically-focused light transmitters, with two different degrees of luminance and collimation to accommodate varying conditions.  This has been proven more effective than constraining the beam’s axis to that of the substrate vehicle, since the bio-system is capable of quickly adjusting the azimuth and elevation of the head assembly to center the region of interest in its visual frame of reference (not necessarily co-axial with the current physical trajectory).  Whenever the system is traversing a region of the planet currently devoid of insolation, reflections of these beams from landscape features and signage allow real-time decision-based navigation at normal velocities.  We considered reducing power requirements by overlaying an image-intensification system upon the visual field, but this is not an effective solution… it is highly beneficial for autonomous wetware systems piloting petroleum-based land vehicles to recognize the presence of BEHEMOTH and take appropriate evasive action.

The ability of the bio-system to track objects of interest through precise 3-axis positioning of the head assembly enables an additional level of interface with the on-board computer network.  Three 40 kHz ultrasonic receivers positioned on the BIU’s crown and temples receive a reference beam transmitted from the console.  Pitch and yaw angles are derived from raw phase and doppler information, then are used by a dedicated processor to determine precise head pointing angle.  Az-El data in quadrature form are converted to ADB events and passed to the Mac, yielding an apparent link between the rider’s nares and the on-screen cursor.  All mouse pointing is done with gross angular BIU movement; clicking and dragging are accomplished via handlebar contact closures antipodal to the data-entry keys associated with the user’s phalanges.

The BIU is designed to cushion the relatively delicate host organism upon occurrence of rapid deceleration associated with impact.  Should the human system separate from BEHEMOTH and become launched upon a divergent ballistic trajectory, the twin coiled cables carrying all interface lines will achieve full extension, actuating lanyard-release connectors.  This is designed to prevent abrupt cervical misalignment (or separation) in high-velocity crisis situations.

Biophysical temperature rise resulting from the accumulated losses of propulsion workload (exacerbated by the low thermal conductivity of the shock-isolating foam shell, especially under conditions of elevated ambient) can be controlled through a fluid heat exchanger closely coupled to the scalp, circulating fluid from an insulated reservoir of aquatic phase-change nodules via a manually-activated peristaltic pump.  Bio-system hydration is managed via a small bite valve that can be inserted into the rider’s speech output device (which doubles as the input port of the alimentary tract and auxiliary oxygen-uptake unit).

Since the osseocarnisanguineoviscericartilaginonervomedullary system is essentially dependent upon fluid-evaporative cooling involving eccrine glands distributed over a large percentage of its epidermal surface (despite significant augmentation by the cranial heat-exchanger), there is potential for heavy accumulation of concentrated saline exudate inside the extruded polystyrene foam shock-isolation layer.  This is reduced through an absorptive accumulator that can be manually cleared, as well as a circumferential fluid-removal channel that carries waste coolant back to the occipital region and thence into an overflow tube terminating at the first thoracic vertebra.  These measures insure a minimum of irritation to the delicate ocular membranes under heavy load (the wetware information system, though only dissipating about 10 watts, is unfortunately dependent upon the same metabolic processes that support the bio-engine’s fuel, waste, and heat management facilities).

In short, the BIU is the key interface link between BEHEMOTH and all aspects of its biological host organism.  It provides crash safety, cooling, hydration, sweat removal, visual graphics display, luminance attenuation, communication and entertainment audio, a voice control channel, a view of the road behind, a steerable light source, and a mechanism for hands-free mouse control.

Posted in System Documentation and tagged BEHEMOTH, BIU, Helmet
← Video: the Bicycle, a Celebration of the InventionBEHEMOTH at Apple Professional Exchange meeting →