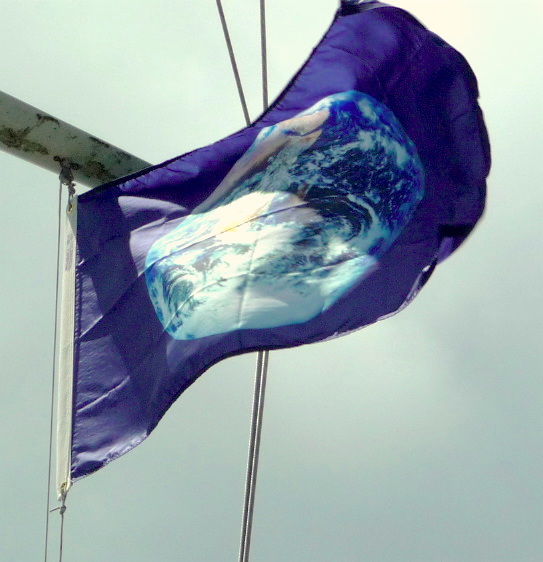 Nowhere is the infinite interconnectedness of human relationships so clear as in a succession of small coastal towns, isolated from the rest of the world — towns small enough to be interdependent, yet large enough to be vigorous; places rugged enough to discourage the lazy, yet beautiful enough to attract the intelligent. Such a zone is the western edge of Mendocino County: a sort of meta-community spread along the cliffs of northern California. We’ve been traipsing through a sparse network of linked relationships like a couple of hundred dollar bills in Miami.

This coastal culture differs dramatically from the rest of the country. To some extent, it can be attributed to the scenic character of the land, something that can have sweeping effects on natives. Beauty sells, you know: Highway 1 winds along the coast like a varicose vein, offering the seasonal torrent of tourists an optimum view as they bring economic hemoglobin into these areas of marginal industry. A long-established love-hate relationship is in force here, a reluctant symbiosis between hawker and gawker.

There’s something about low-bandwidth communication between non-miscible cultures that affects everybody. I’ve seen it in other tourist areas: each group, locals and visitors, begins to generalize about the other — to lump them together into a single stereotype. The brash tourist. The uppity local. Those stupid RV’ers. Those weird hippies. Residents look the other way as they draw their livelihood from the people who prompted their flight from the city in the first place.

But there’s more, though, quite a lot more. Success in these parts isn’t on the same economic scale as it is in mainstream America. Trade work abounds. The land provides. Friends support each other. And it works well because the economic bottom line is simply not the point; quality of life is. And the deeper you look, the more interesting it becomes…

These little towns harbor a remarkable population of creative people — the kind you would normally expect to find in high-tech node cities blanketed in stimulating vapors of silicon. Networkers who have eschewed systems with a corporate substrate in lieu of electronic anarchy (FIDO and packet). A guy who turns Cadillacs into bizarre artworks. Another who builds high-performance audio cassettes. Monkeywrenchers dedicated to the battle against despoilers of the wilderness, practicing “ecotage” on an increasing scale. A fabricator of custom dental equipment. A man who makes computerized biofeedback systems that sell for nearly $50,000. And everywhere, literally everywhere, a degree of awareness that fulfills the oft-lamented promise of the 60’s. Even the bookstores, small though they be, are dizzying.

And encounters can be funny. Phoenix introduced herself as having “seven fire signs, and two air signs to fan the flames.” A fellow named Raven B. Earlygrow runs a travel agency. A Mendocino radio pirate got busted for his innovative auto-answer “you’re on the air” machine, bought into a public-access cable TV channel, and now broadcasts whatever people send him. Reagan is profoundly unpopular around here, to the point that I was recently presented with an interpretation of ancient biblical prophesy predicting his demise on August 17, 1987. And a friend in Elk explained the lingering personal effect of the World Instant of Cooperation: less cynicism. This is the land of rural counterculture.

The thing that’s pleasing about it all, despite frequent overdoses of HMB (hip metaphysical bullshit), is an intellectual liveliness that has at its roots a lot of the right motives: protection of mother earth for reasons beyond her continuing usefulness to Man, prevention of human self-destruction over matters of ideological nonsense, revision of our self-poisoning habits, and the general objective of peace on all levels. A lot of us, um, sorta forgot about those things as we “grew up” from the Age of Enhanced Consciousness into the Epoch of Bottom Lines — a dubious maturation indeed.

But isn’t it hard to change the world when you’re eking out a small-town living as a part-time pump repairman, part-time gatherer of sea urchin eggs, and part-time poet of the revolution? So what if one of your poems ran in the Mendocino Review last summer, and so what if you successfully planted a tire-spiker in a fording spot up Elk Creek to discourage the mob of littering, noisy off-roaders? It’s a big world. How ya gonna change it from here?

Well, my wanderings have suggested an optimistic comment on that. Contrary to popular news stories of the day, social change does not hinge on government overthrow. Those are just the warrings of competing ideologues, not incremental steps in the evolution of consciousness. Growth — the recognition and elimination of ignorance — happens on a human level, slowly, building over time like the gradual conversion of a successful anomaly into a whole new species. Governments and eco-trashers simply apply selection pressure, insuring their eventual deterioration.

The essence is communication, one of my main motives for becoming a writer in the first place. Freelancing is actually a maddening business, as my recent frustrated ramblings may have suggested — not many people make a full-time living at it. I barely manage. But amassing private riches is not nearly as important as protecting public ones; a larder full of stocks and bonds is but a hollow trophy without good food, air, water, communication, recreation, security, and personal freedom. Whatever one person can do to raise the awareness of another is the best social contribution of all — one small step at a time until we all realize which of our systems are healthy… and which ones should be replaced.

This coast is an area that enforces understanding of whole systems. You can’t pick your way among the tidepools, marveling at geometric chitons and subtly-hued anemones, bending to touch massive starfish and strange whiplike growths 20 feet long, without sensing something of the planet’s complexity and deep interconnectedness. Everything is part of the food chain — we’ve just grown cocky because we happen to be on top.

All we need now is a few healthy predators to remind us that we’re all in this together: one species, one planet, one whole.