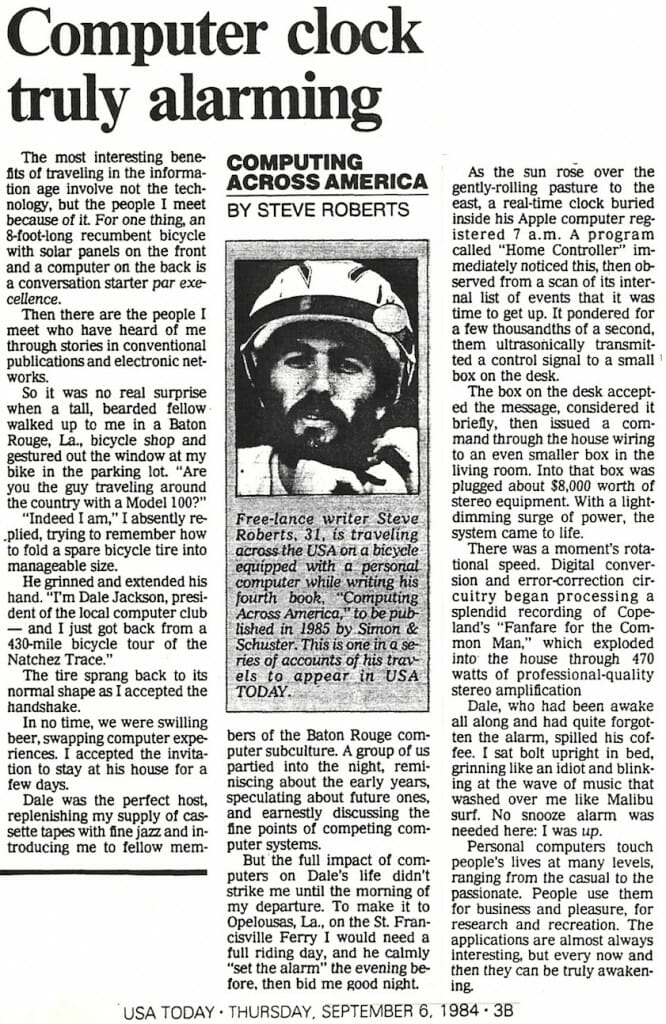 The theme of my “Computing Across America” column in USA Today was a bicycle-borne quest to find interesting uses for personal computers, and I was quite fascinated by my first meeting with someone who was very serious about Big Stereo and home control. This is the tale of my visit with Dale Jackson in Baton Rouge, Louisiana…

The most interesting benefits of traveling in the information age involve not the technology, but the people I meet because of it. For one thing, an 8-foot-long recumbent bicycle with solar panels on the front and a computer on the back is a conversation starter par excellence.

Then there are the people I meet who have heard of me through stories in conventional publications and electronic networks.

So it was no real surprise when a tall, bearded fellow walked up to me in a Baton Rouge, La., bicycle shop and gestured out the window at my bike in the parking lot “Are you the guy traveling around the country with a Model 100?”

“Indeed I am,” I absently replied, trying to remember how to fold a spare bicycle tire into manageable size. He grinned and extended his hand. I’m Dale Jackson, president of the local computer club —and I just got back from a 430-mile bicycle tour of the Natchez Trace.”

The tire sprang back to its normal shape as I accepted the handshake.

In no time, we were swilling beer, swapping computer experiences. I accepted the invitation to stay at his house for a few days.

Dale was the perfect host, replenishing my supply of cassette tapes with fine jazz and introducing me to fellow members of the Baton Rouge computer subculture. A group of us partied into the night reminiscing about the early years, speculating about future ones, and earnestly discussing the fine points of competing computer systems.

But the full impact of computers on Dale’s life didn’t strike me until the morning of my departure. To make it to Opelousas, La., on the St. Francisville Ferry I would need a full riding day, and he calmly “set the alarm” the evening before, then bid me good night.

As the sun rose over the gently-rolling pasture to the east a real-time clock buried inside his Apple computer registered 7 a.m. A program called “Home Controller” immediately noticed this, then observed from a scan of its internal list of events that it was time to get up. It pondered for a few thousandths of a second, them ultrasonically transmitted a control signal to a small box on the desk.

The box on the desk accepted the message, considered it briefly, then issued a command through the house wiring to an even smaller box in the living room. Into that box was plugged about $8,000 worth of stereo equipment. With a light-dimming surge of power, the system came to life.

There was a moment’s pause as the compact disc reached rotational speed. Digital conversion and error-correction circuitry began processing a splendid recording of Copland’s “Fanfare for the Common Man,” which exploded into the house through 470 watts of professional-quality stereo amplification.

Dale, who had been awake all along and had quite forgotten the alarm, spilled his coffee. I sat bolt upright in bed, grinning like an idiot and blinking at the wave of music that washed over me like Malibu surf. No snooze alarm was needed here: I was up.

Personal computers touch people’s lives at many levels, ranging from the casual to the passionate. People use them for business and pleasure, for research and recreation. The applications are almost always interesting, but every now and then they can be truly awakening.