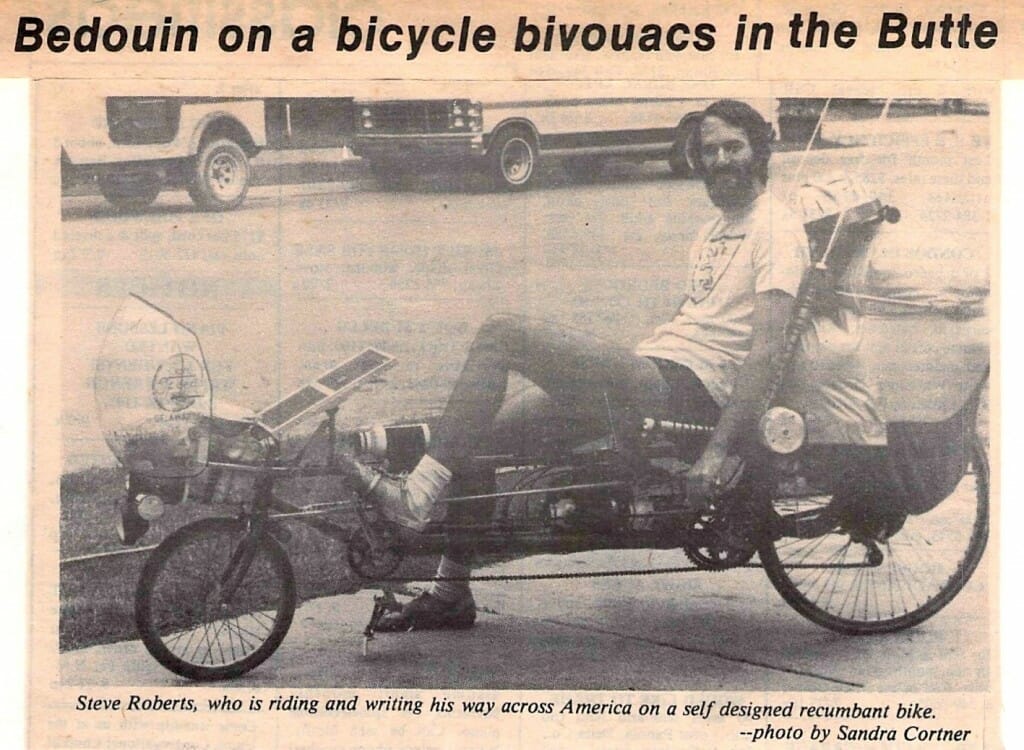 In the collection of around 200 newspaper articles from my years of technomadic cycling, this one has always held the crown for the most delightfully alliterative title. I spent a week or so in Crested Butte, Colorado (leading to a passionate book chapter), and every day was filled with something wonderful, intense, or beautiful. On the way to the Butte from Gunnison, riding with two girls I had met at the college, there was a grisly accident… an old rancher struck them with his pickup truck, leading to a real scare about spinal cord injury (fortunately, she just broke her sacrum, but still… it was a nightmare… see the clipping at the bottom of this page). That event aside, my stay in the Butte was one of the most formative events of the whole journey, demonstrating for the first time the potential home of a close-knit community.

THE BICYCLE RACE IN Crested Butte this past weekend attracted all sorts of people, biking enthusiasts all, but probably none more unusual in terms of his style of living than Steve Roberts. Roberts and his specially designed bicycle have been on the road across the U.S. for a year as part of what he calls “a bawdy hi-tech adventure.” With the aid of solar panels and a portable computer hooked up to the bike, Roberts has managed to make an office of his two-wheeler.

Roberts, 31, dropped out of college in his first year, after which he bummed around for a while and spent some time in the Air Force. To get a job in the engineering field, he was told he would need a degree to satisfy the demands of the engineering firms. Rather than return to school, he decided to start his own engineering company. He did so and ran it for six years doing custom industrial control systems for large corporations. After that measure of success, he decided he was ruining his passion in life by making it into a business. He wanted a license to become what he calls “a generalist” rather than having a specific technical trade. So he became a free-lance writer, which he claims he enjoys more than anything he has done.

The other thing he likes doing is hitting the road on his bike, which he did last September in Columbus, Ohio. He has ridden from there to Maryland, down the eastern coast to Key West, and up along the rim of the Gulf of Mexico, north through Texas and New Mexico and into the Colorado Rockies. He is, as he goes, writing a book on his adventures with the use of a computer, which is fueled by the solar-charged battery on his bike, It will be his fourth book, the previous three all based on facets of the world of computers. He writes at the same time a bi-weekly column for the national newspaper USA Today and contributes pieces to different magazines.

Says Roberts, “I didn’t want to be stuck in one place on one job. I knew I wanted to travel, but if I waited until I had enough money to do it in luxury, I would have to wait until I’m over 65.” Instead, Roberts improvised, himself designing a bike frame he refers to as a “Winnebiko” with everything he says he needs for his manner of living.

The frame was made according to his specifications by Franklin Frames in Columbus, the first recumbent bike they have produced. To allow Roberts to take his business on the road, the bike is equipped with a solar-powered battery with recharging capacity. This provides energy for the bike’s extra-long headlight, horn, security system, CB radio, tape deck and cassette recorder, stereo microphone for recording while riding, lights for his tent, an altimeter, and his computer, a Hewlett-Packard 110 for word-processing and use as a computer. The computer also hooks up to any handy pay phone and transmits written copy back to Roberts’ office in Columbus, where an assistant is linked up via the CompuServe system. She then types it up and sends the copy to his book or magazine editors. The same hook-up allows Roberts to receive the contents of all mail sent to him in Columbus, with it appearing on his computer screen. The system, he swears, has the effect of operating a full office through remote control with his bike as his work area and transport.

The eight-foot 18 speed bike carries 180 pounds of gear, including the frame. Going with Roberts are his camping stove, tent and sleeping bag, food, air mattress, spare parts, tool kit, library of cassette tapes, binoculars, and just about everything else. The bike is equipped with a secondary power system for the lights, a drum brake, wide-range derailleur, under-seat steering, and a unique frame geometry. It also comes with an aluminum stick for use as a kickstand and dog-whacker. The solar panels produce five watts in the full sun, enough for Roberts’ needs and those of his computer.

So far, the venture has taken him about 7,000 miles. He expects to go on for another 20,000 or so. But there are no deadlines. “There is no goal,” says Roberts. “The trip itself is the goal. The book is a spin-off of the trip and a compilation of my adventures. I’m just going to do it until I get tired.” Undaunted by three sets of tires and nine flat tires, Roberts pedals onward.

For the time being, and it is expected to be only a short time, Roberts is staying in Crested Butte. He said he had heard of Crested Butte due to promotion of Fat Tire Bike Week and in association with mountain bikes but until arriving here had never seen so many cyclists on an open stretch of road as he did between C.B. and Gunnison. He was also accompanying the two females on bikes struck by Tony Verzuh’s truck late last week. The accident occurred just as he and the two Gunnison girls were arriving in C.B., Roberts for the first time. His experience left him convinced of the need for some widening of Route 135 and painted lines along the roadside to accommodate the safety concerns of fellow cyclists. [see clipping below]

Speaking of security, Roberts has also concocted a system to insure that his mobile office operation does not unexpectedly become the property of a bicycle thief. He has installed something of his own design which is sensitive to vibration and rings into a beeper which resides on Roberts’ belt.

Although he has constructed his portable lawn chaise on wheels for his own purposes, Roberts is becoming something of a celebrity, both through his writing and his bike. Cyclist and cycle were featured in last month’s issue of Popular Computing and a recent issue of Popular Science. His column in USA Today features episodes from his computing voyage across the country. He will be in next month’s issue of Time. He is also expected in Aspen later this week to tape a segment for the TV show “Good Morning, America“.

The other day, Roberts was sitting on the stoop in front of the Chronicle office working away on his portable computer. One segment, of his writings seemed to embody his current credo: “This system is working well. Work gets done, and life is a study in sheer exuberance, touched with madness, yet tempered by the realities of business. I lay over here and there to catch up on overdue projects-sometimes for weeks-and then the tires start to itch. The only cure is a good piece of asphalt.”

There is a story in my Computing Across America book about the ride up from Gunnison to Crested Butte… when the two women who were accompanying me were hit by a rancher in his truck. They were far ahead of me after a series of hills, and I came upon the horrifying scene of my friend in the ditch, unmoving. Here is that clipping:

Two women cyclists were hit by a truck Thursday, August 30, at 3:15 p.m. while riding their 10-speed bicycles on highway 135 about two miles south of the Town of Crested Butte. The two 22-year olds, Kathleen Haley and Karen Ropers, were riding north when a truck driven by rancher Tony Verzuh, 71, hit them.

According to Ms. Haley, the women were riding on the far right side of the pavement and didn’t hear the truck come up from behind. Ms. Ropers was grazed first and then Ms. Haley was hit squarely, the impact throwing her off her bike and into, a ditch where she landed on her back.

Verzuh stopped his truck to assist the girls, evidently not having seen them. Ms. Ropers told him to drive to Skyland Golf Course to call an ambulance, which he did. Ms. Roper’s injuries were slight while Ms. Haley’s were more severe. She is suffering a fractured sacrum or tail bone.