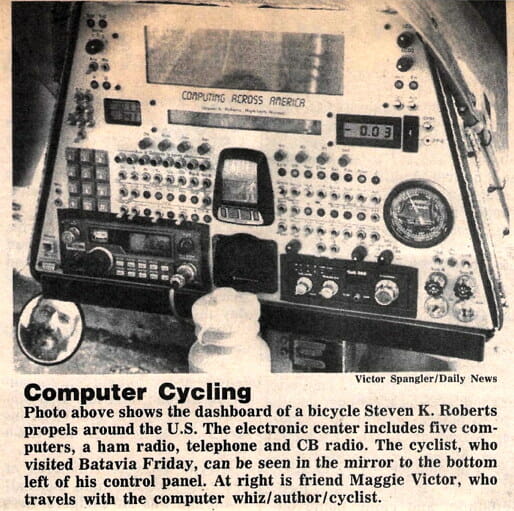 This was just a brief snippet from western New York, as we were enroute from Buffalo to the Finger Lakes and Ithaca. Local newspapers would often get wind of our passage and send a photographer to meet us on the road; this one had almost no accompanying story.

That little mirror trick in the photo, by the way, was something I often did… ever since it happened accidentally back in Seattle during one of the first interviews around the Winnebiko II.

Photo above shows the dashboard of a bicycle Steven K. Roberts propels around the U.S. The electronic center includes five computers, a ham radio, telephone and CB radio. The cyclist, who visited Batavia Friday, can be seen in the mirror to the bottom left of his control panel. At right is friend Maggie Victor, who travels with the computer whiz/author/cyclist.

A Batavia boy rides his old-fashioned bicycle next to Steven K. Roberts, a self-proclaimed high-tech nomad, who rode through Genesee County Friday on his computerized recumbent bicycle. The 220-pound cycle has been Mr. Roberts’ home and office since 1983, taking him over 13,000 miles. The former Columbus, Ohio, resident writes books while cycling across America. At rear is friend Maggie Victor.