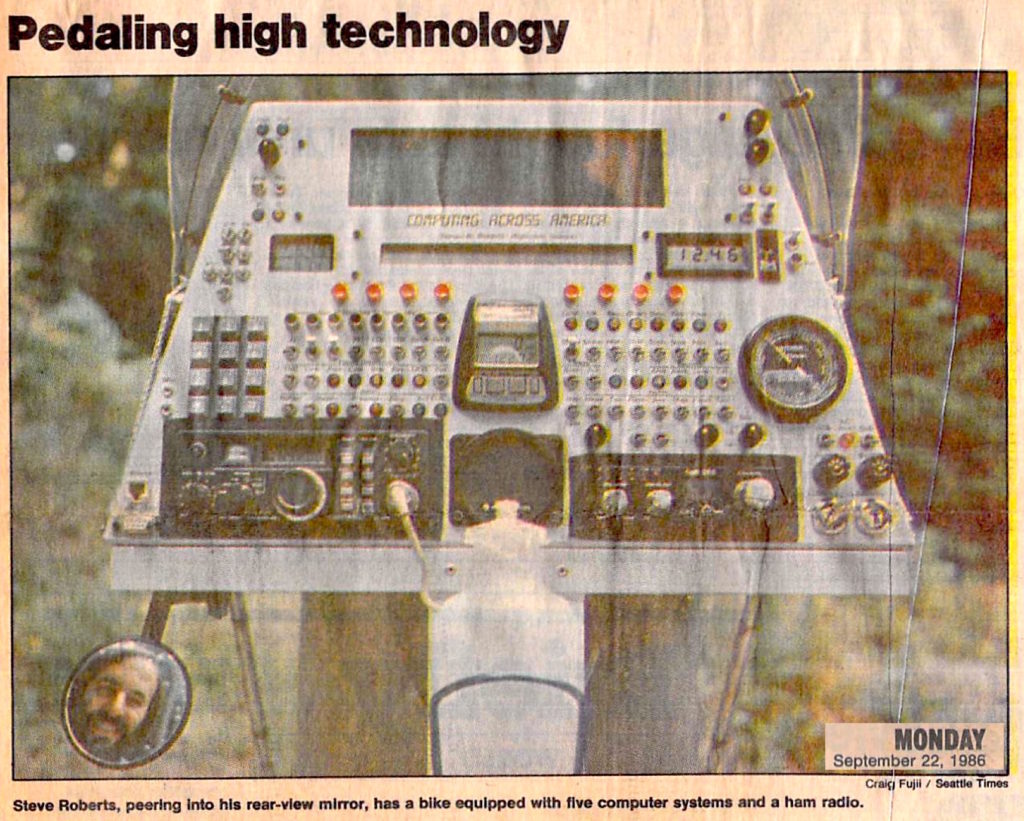 This article was particularly well-timed and pivotal. We were on Bainbridge Island, cranking hard on the Winnebiko II with a departure date about 3 weeks away, and having a front-page color feature in the Seattle Times was a wonderful boost of energy.

Cyclist hitting road on a Winnebiko

When Steve Roberts sets out from Bainbridge Island on a 10,000-mile bicycling odyssey next month, he’ll have no fewer than five computer systems helping him out. And they’ll all be on his bike.

Roberts, a 33-year-old self-proclaimed “high-tech nomad,” is putting the finishing touches on the creation he’ll call home for the next year or two: a custom-designed “Winnebiko” that does everything from finding him a place to stay to telling prowlers to keep their hands off.

Roberts was doing free-lance writing for computer journals three years ago when the biking bug bit.

“There was something about being a free-lancer stuck in a three-bedroom ranch in suburbia that just wasn’t quite right,” he recalled yesterday. “So I decided to take all my passions and roll them into one lifestyle.”

The melding of those passions — travel, computers, and writing — resulted in a two-year trip that took him from Ohio through the Southern states to California. On that trip, he used a Hewlett-Packard portable computer to write articles for publications ranging from USA Today to Popular Science, as well as a book, Computing Across America, which is scheduled to be published by Learned Information this fall.

But something still wasn’t quite right.

“I found that I was riding all day, having all these stories in my head, and by nightfall, when I settled down to write, I was too tired or I was busy meeting people,” he said.

So Roberts, who at one time owned a computer engineering firm, set out to find a way to write and ride at the same time. What he came up with was a system of four keys built into each of the bike’s two handlebars. Through combinations of the different keys, he can create all the letters, symbols and numbers one would find on a typewriter keyboard, which will show up on a screen in front of him.

And he’ll do it all while cruising some of the nation’s most beautiful highways with travel companion Maggie Victor (on a separate bike). The two have no set travel itinerary, but plan to travel south to California first, then possibly to the Midwest, New England, and Canada.

In addition to allowing him to pedal, write and steer at the same time, the bike’s solar-powered computer systems:

Roberts, who is staying with friends on Bainbridge after displaying his bike at Expo 86 in Vancouver, is now putting the finishing touches on a voice-synthesizer function that will free him from a tiresome chore: explaining over and over again just what his 36-speed, 225-pound contraption is all about.

“Sometimes I get tired of coming out of a restaurant and giving a little speech to 30 curious tourists,” he explained. “So the bike will explain itself every few minutes. I’ll even have it say on the (computer) screen ‘Next show will start at such-and-such time.’ “

Most of the time, though, Roberts enjoys meeting people on the road — like the Ohio farmer who took one look at his new-fangled vehicle, “spat tobacco juice and said, ‘Are you with NASA?’ “

He’s even fallen in love — “on the road and on line,” he added. Roberts’ computer romance continued for months before he finally met the woman involved in what he calls, “the ultimate blind date.”

So far, Roberts has had no major mishaps, “though I have seen cars hit each other because the drivers were too busy looking at me.”

In addition to the five computer systems, the 8-foot-long bike is equipped with a ham radio, CB, 2-inch screen TV, electronic compass, digital shortwave radio, and two cassette players: one for music and one for dictation. And oh, yes, there is a little room in back for clothing, camping gear and other “minor” necessities.