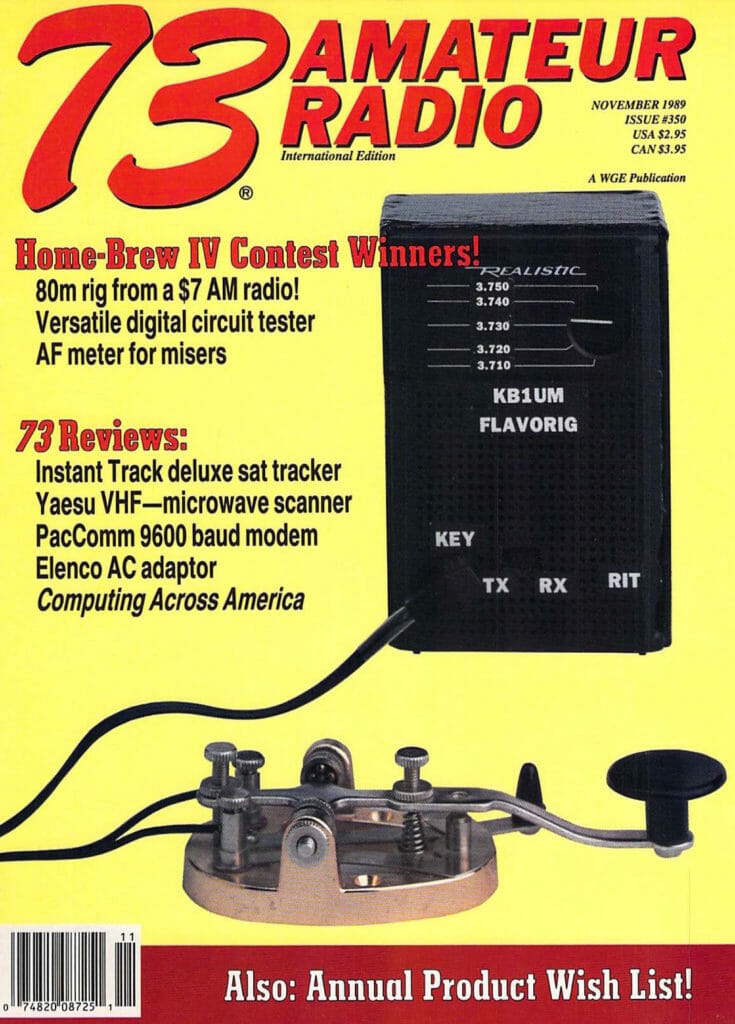 “Suburbia is not a place; it’s a state of mind… You live in suburbia when the cycle of work and play becomes dangerously unbalanced in favor of work.” (Computing Across America, page 3.)

If you’re like me, there have been times when you’ve felt that your lifestyle is too confining. Do you spend so much time maintaining your home, your car, and other possessions that it seems those possessions own you? Does your work really offer you excitement, creativity, contact with other people, and a sense of adventure?

Or do you just wear yourself out, go home, eat supper, do chores, and fall asleep in front of the TV? This world is full of colorful places and fascinating people. Do you feel you have to wait until you retire to see them for yourself? If you’ve ever had the impulse to sell your house and car, quit your job, and travel for the next few years, then you’ll probably enjoy this book.

Readers of 73 Magazine will be familiar with Steve Roberts’ articles about the technical aspects of his tour of the United States. Roberts’ recumbent bicycle carries a cornucopia of ham gear, computers, and modems, together with a stereo, a TV, and other goodies, powered by two banks of solar cells and protected by a sophisticated alarm system. The current version of his bicycle even contains an eight-switch ASCII keyboard embedded in the handlebars. Roberts can actually enter characters into his computer while pedaling the bicycle, which helps him continue to earn a living as a writer while on the road.

This book does not contain circuit diagrams and technical discussions of Roberts’ gear. For that, keep watching the pages of 73 Magazine. Rather, it is the story of Roberts’ adventures: the people he met and the places he saw on his first trip.

Roberts seems to be something of a romantic soul. This book was written almost from a poet’s point of view. He acquired so many girlfriends on his first journey that the book could almost have been called “Womanizing Across America.” Roberts recalls each of these relationships in a gentlemanly and gallant way. OMs may enjoy fantasizing about such exploits, but as a YL, I was somewhat taken aback at the number of broken hearts he left behind. But he wasn’t ready to settle down. The call of the open road, which he calls “the other woman,” proved too strong a lure.

On his journey, Roberts encounters the conflicts between security and freedom, comfort and adventure, and the desire for permanent relationships and the reluctance to give up future options. He acutely observes the lifestyles and customs prevalent in the places he visits. Some passages are moving, such as his first meeting with his biological mother. Some are informative, such as his tour of the National Weather Service station in Louisiana, and his description of how he used the CompuServe online network. Others are humorous, such as an unexpected encounter with a rattlesnake in New Mexico.

My own decision to buy this book was influenced by the fact that I had also enjoyed two other books of this genre, A Walk Across America by Peter Jenkins, and Blue Highways, by William Least Heat Moon. These books cover similar territory, both literally and figuratively — traveling through America as an adventure, an education, and a rite of passage. Roberts even stayed in Lake City, Colorado, which had been made famous in Peter Jenkins’ book.

Like Jenkins and Least Heat Moon, Roberts acquires more confidence on his journey and takes the opportunity to rid himself of stereotypes, prejudices, and fears. Since Roberts’ personality and outlook differs so much from that of the other two authors, Computing Across America presents an original point of view. Roberts appears to have somewhat more of an ego than the other two authors. He is also more outgoing. He actively seeks emotional involvement, attention, and the limelight. He also appreciates the possibilities of using technology in the service of greater freedom.

Steve Roberts is still traveling and writing, but now he has a traveling companion, Maggie Victor KA8ZYW. (She appears in the epilogue of Computing Across America.) This book mentions their getting ham licenses, but doesn’t say much else about ham radio. A book such as this wouldn’t be the place to discuss the technical aspects of ham radio, but ham radio isn’t just equipment and technology. It’s also communication — meeting, getting to know, and working with other people. In future books, I hope that he and Maggie share some ham radio stories with us.

I recommend this book. Where do you buy it? If you missed the opportunity to buy an autographed copy from the author at the Dayton Hamvention, you can order it by mail from Computing Across America Publications Center <obsoleted address redacted>