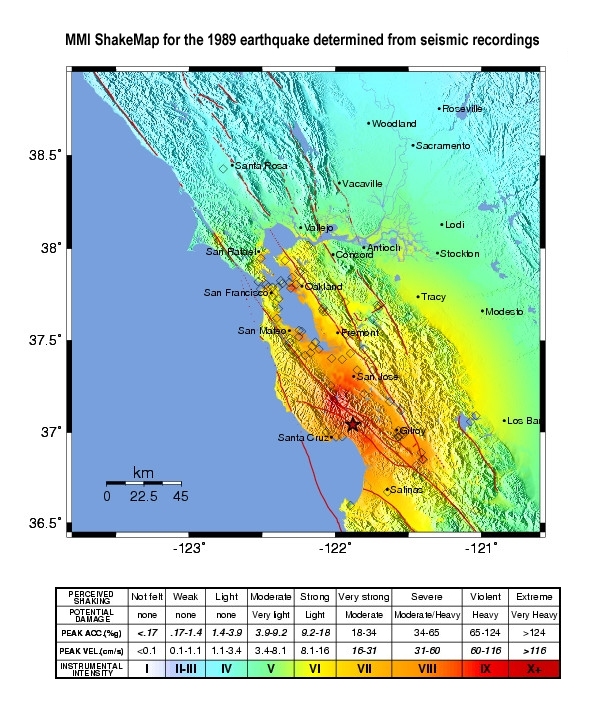 On this date, something huge happened… shaking me to the core. It was the Loma Prieta earthquake, and I was living in Santa Cruz, working on what would become BEHEMOTH.

The HF ham radio in the trailer was working (Icom 725). We had no power for weeks, phones were out, and cellular was yet rare (and broken anyway). I let it be known around the neighborhood that I could make a best-effort attempt to let folks know they were alive… and people would bring me slips of paper with their families’ phone numbers (and sometimes a treat). I taped these to the wall and ran my own little traffic net, finding hams who would make calls that were often long-distance for them. It was gratifying.

Life was so scrambled for a while that I didn’t do a full story about it, but this was a brief snippet in the introduction to Issue 7 of Nomadness:

If you’ve heard even a shred of news over the last month, then you know there was an earthquake in California. As it happens, we’re now living in Santa Cruz eight miles from the epicenter, so we felt it pretty intensely — and at this writing, highways are still closed, aftershocks roll in every few hours, and people all over town are in a daze about their personal losses and those of the community.

This makes the “Naked at the Epicenter” story, written August 9, both obsolete and prophetic. That one was an amusing little 5.2 on the Richter scale, a shot of adrenaline comparable to a nice cup of espresso at the quake-shattered Cafe Zinho. Tuesday’s 7.1, on the other hand, was a stun-gun to the heart.

I was editing a story when the room started to shake, and by the time the reality sunk in things were moving too much for me to stand. Equipment was crashing to floor and desktops (fortunately not the new Macintosh Portable, which I had only acquired 2 hours earlier), and I could hear the old house coming apart. The roar, the rumble, the deep infrasonic soul-shaking power of a large earthquake are virtually indescribable. You just don’t expect the earth to dance under your feet, and when it does, you lose your grip on every physical reference point you’ve ever had. The terror is raw and primitive: something infinitely large and powerful is PISSED, and there’s nothing you can do about it.

Bouncing off walls, I ran outside where Maggie was finish-sanding my new trailer. We ran into each other’s arms, wide-eyed, hearts pounding, recalling in a rush all the words about the Big One, California falling into the ocean, the earth opening up to swallow houses, all of it. On the next block, half the roof slid off a church. Our cat freaked and ran next door, while the cat next door freaked and ran over here. Screams arose from neighboring houses. And unbeknownst to us, the entire Bay Area was getting ravaged by the worst quake since 1906, with whole freeways collapsing on commuter traffic and dozens dying at the same moment.

Now I’m back in the office, a pile of clutter, everything still randomly distributed. Aftershocks tighten the chest like a metallic click behind you in a dark alley. And I have this strange urge to be on the road… like the cats… away from here!