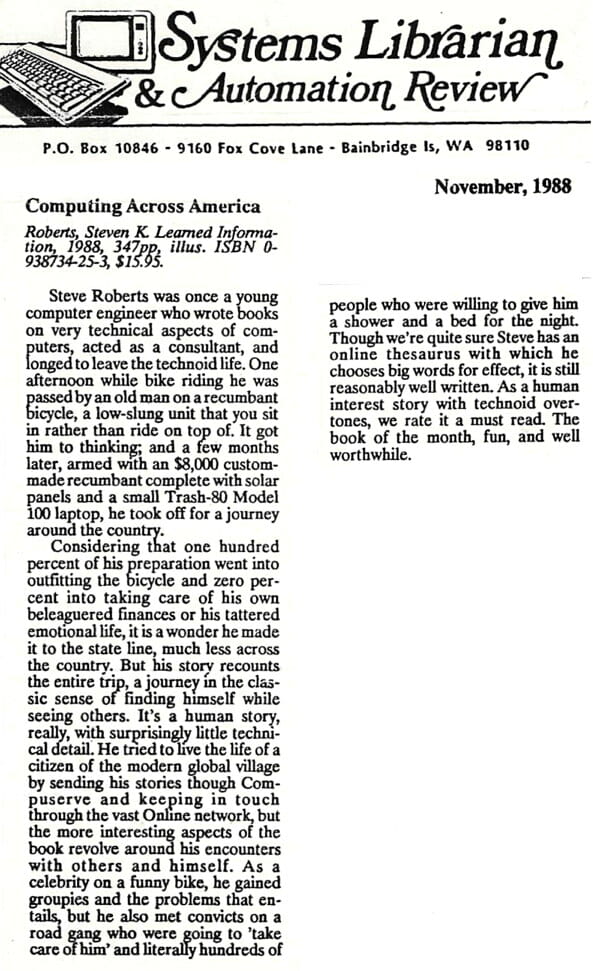 I don’t know this publication, but have to chuckle at the comment near the end in which they say I must have a thesaurus with which I choose big words for effect. I have found that such comments only come from folks who are a bit vocabulary-challenged… they even misspelled “recumbant.” I last owned a thesaurus in high school, and can’t imagine using one as a writing aid, nor can I think of any places in the book where I lapse into gratuitous sesquipedalian obfuscation.  Ah well, you can’t please all of the people all of the time… nor would you want to! Still, a net-positive review, a welcome addition to the archive….

Steve Roberts was once a young computer engineer who wrote books on very technical aspects of computers, acted as a consultant, and longed to leave the technoid life. One afternoon while bike riding he was passed by an old man on a recumbant bicycle, a low-slung unit that you sit in rather than ride on top of. It got him to thinking; and a few months later, armed with an $8,000 custom-made recumbant complete with solar panels and a small Trash-80 Model 100 laptop, he took off for a journey around the country.

Considering that one hundred percent of his preparation went into outfitting the bicycle and zero percent into taking care of his own beleaguered finances or his tattered emotional life, it is a wonder he made it to the state line, much less across the country. But his story recounts the entire trip, a journey in the classic sense of finding himself while seeing others. It’s a human story, really, with surprisingly little technical detail. He tried to live the life of a citizen of the modern global village by sending his stories though CompuServe and keeping in touch through the vast Online network, but the more interesting aspects of the book revolve around his encounters with others and himself. As a celebrity on a funny bike, he gained groupies and the problems that entails, but he also met convicts on a road gang who were going to ‘take care of him’ and literally hundreds of people who were willing to give him a shower and a bed for the night. Though we’re quite sure Steve has an online thesaurus with which he chooses big words for effect, it is still reasonably well written. As a human interest story with technoid overtones, we rate it a must read. The book of the month, fun, and well worthwhile.