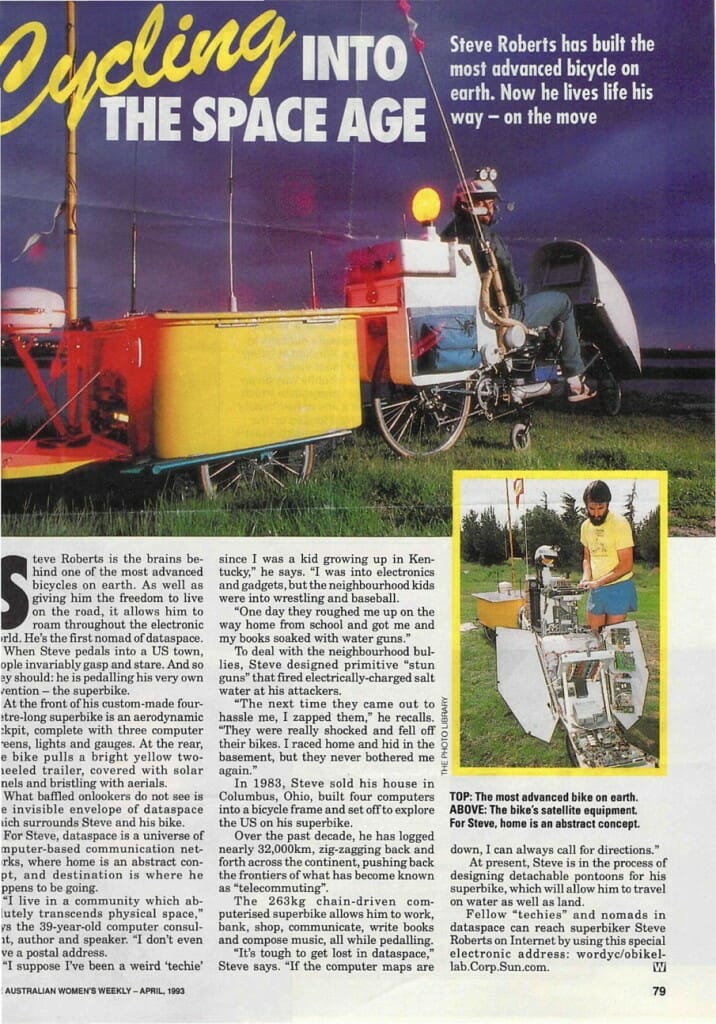 This is a much-loved publication Down Under, and this somewhat amusing story was clearly written by an enthusiastic reporter… a few things were lost in translation (like my email address). But I love the imagery of the “invisible envelope of dataspace which surrounds Steve and his bike.”

Steve Roberts is the brains behind one of the most advanced bicycles on earth. As well as giving him the freedom to live on the road, it allows him to roam throughout the electronic grid. He’s the first nomad of dataspace.

When Steve pedals into a US town, people invariably gasp and stare. And so they should: he is pedaling his very own invention – the superbike.

At the front of his custom-made four-metre-long superbike is an aerodynamic cockpit, complete with three computer screens, lights and gauges. At the rear, the bike pulls a bright yellow two-wheeled trailer, covered with solar panels and bristling with aerials.

What baffled onlookers do not see is the invisible envelope of dataspace which surrounds Steve and his bike.

For Steve, dataspace is a universe of computer-based communication networks, where home is an abstract concept, and destination is where he happens to be going.

“I live in a community which absolutely transcends physical space,” says the 39-year-old computer consultant, author and speaker. “I don’t even have a postal address.

“I suppose I’ve been a weird ‘techie’ since I was a kid growing up in Kentucky,” he says. “I was into electronics and gadgets, but the neighbourhood kids were into wrestling and baseball.

“One day they roughed me up on the way home from school and got me and my books soaked with water guns.”

To deal with the neighbourhood bullies, Steve designed primitive “stun guns” that fired electrically-charged salt water at his attackers.

“The next time they came out to hassle me, I zapped them,” he recalls. “They were really shocked and fell off their bikes. I raced home and hid in the basement, but they never bothered me again.”

In 1983, Steve sold his house in Columbus, Ohio, built four computers into a bicycle frame and set off to explore the US on his superbike.

Over the past decade, he has logged nearly 32,000km, zig-zagging back and forth across the continent, pushing back the frontiers of what has become known as “telecommuting.”

The 263kg chain-driven computerised superbike allows him to work, bank, shop, communicate, write books and compose music, all while pedalling.

“It’s tough to get lost in dataspace,” Steve says. “If the computer maps are down, I can always call for directions.”

At present, Steve is in the process of designing detachable pontoons for his superbike, which will allow him to travel on water as well as land.

Fellow “techies” and nomads in dataspace can reach superbiker Steve Roberts on Internet by using this special electronic address: wordyc/obikellab.Corp.Sun.com [no wonder I never got any email from readers of this article!]