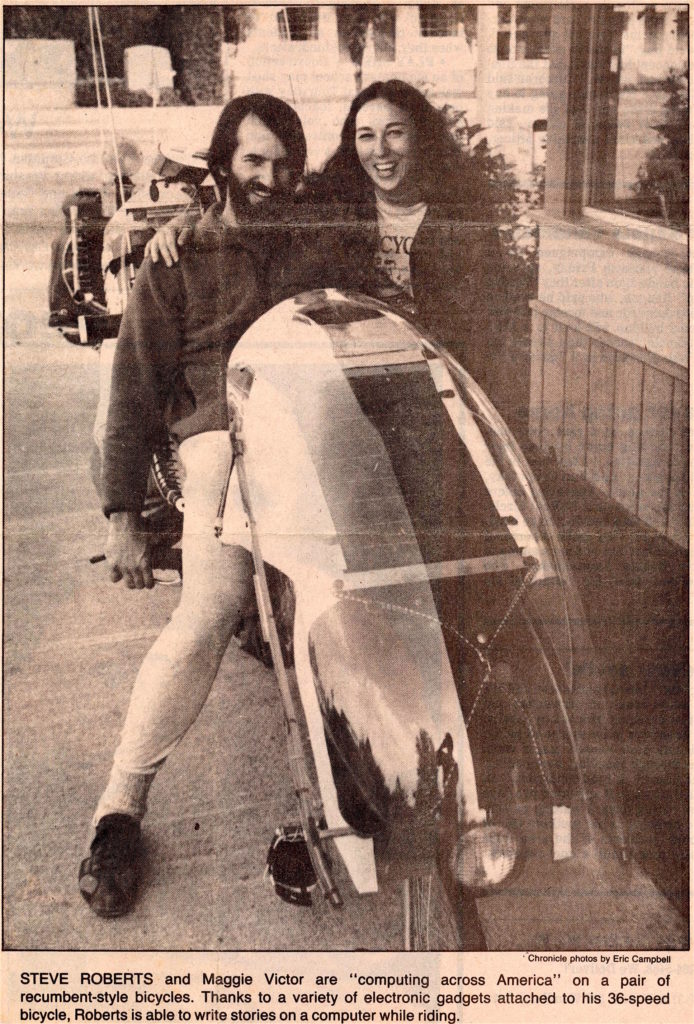 This article in the Chronicle, serving the Centralia & Chehalis area, came out the day after my Windows on Washington story. It has always stood out in my media archives for having one of the most adorable photos ever of Maggie and me, and the article itself is accurate and to the point. This was an exciting, energetic time… we were on the road at last, making our way south just ahead of winter, and about to cross our first state line together.

Ohioan mounted computer on bike for tour of states

Three years ago Roberts combined all those qualities and rode nearly 10,000 miles across the United States. Using a solar-powered computer and modem attached to his bicycle, he wrote about what he saw. Much of his writing was columns for newspapers and magazines. He also managed to put together a book about his experiences.

AND NOW Roberts is back at it, having remodeled his bicycle so he can write while he is pedaling. He and companion Maggie Victor passed through Lewis County on Thursday and Friday, heading south on what could become another 10,000-mile journey.

The Columbus, Ohio-based couple started in Vancouver, British Columbia, where the two exhibited their unusual bicycles at Expo 86. From there they headed to Bainbridge Island for five weeks, and last week Roberts and Victor started pedaling south.

The two 34-year-olds came down through Poulsbo and Shelton, and spent Wednesday night in a tiny Montesano motel. The pair pulled into Centralia on Thursday, and shared a few stories over a late breakfast Friday before heading down Jackson Highway.

Roberts, a self-taught computer expert, had six years’ experience in computer design. He wrote a few textbooks and a couple hundred trade journal articles on the topic before he realized that he preferred the writing itself.

After his successful 1983 trip — writing a column for USA Today and other magazines along the way — he eventually ended up in Texas. He did some computer consulting, but devoted much of his time to writing a book, Computing Across America: The Bicycle Odyssey of a High-Tech Nomad. The book is being published by a New Jersey firm and should be out around Christmas.

IT WAS in Texas that Roberts got the idea to build a keyboard in to his handlebars, so he could write while riding instead of trying to collect his thoughts at the end of each day.

An eight-key keyboard — Roberts has to hit combinations of keys to get certain letters — and display screen aren’t the only things located in the computer module over his front wheel. There’s an abundance of electronic gadgets including an alarm system, a ham radio and a tiny audio speaker, which is used when Roberts has the computer “read” his story back to him.

How can someone write and pedal at the same time? “It isn’t so hard,” he said, keeping an amused eye on the locals outside the restaurant who were staring at the strange-looking bicycles. “I just don’t look at the screen very much.”

Their only definite destinations are Corvallis, Ore., where computer giant Hewlett-Packard has a branch office, and San Francisco, where Roberts has many acquaintances left over from his 1983 excursion.

OTHER THAN that, the two go where they want. The trip could result in a sequel book (“Computing Back Across America,” Roberts quipped), but they aren’t worried about that right now. Roberts and Victor just want to see places they haven’t been.

“A lot of people we’ve talked to said they can relate to it,” said Roberts. “This is every man’s dream, in a sense — to get away and do what he likes best.”