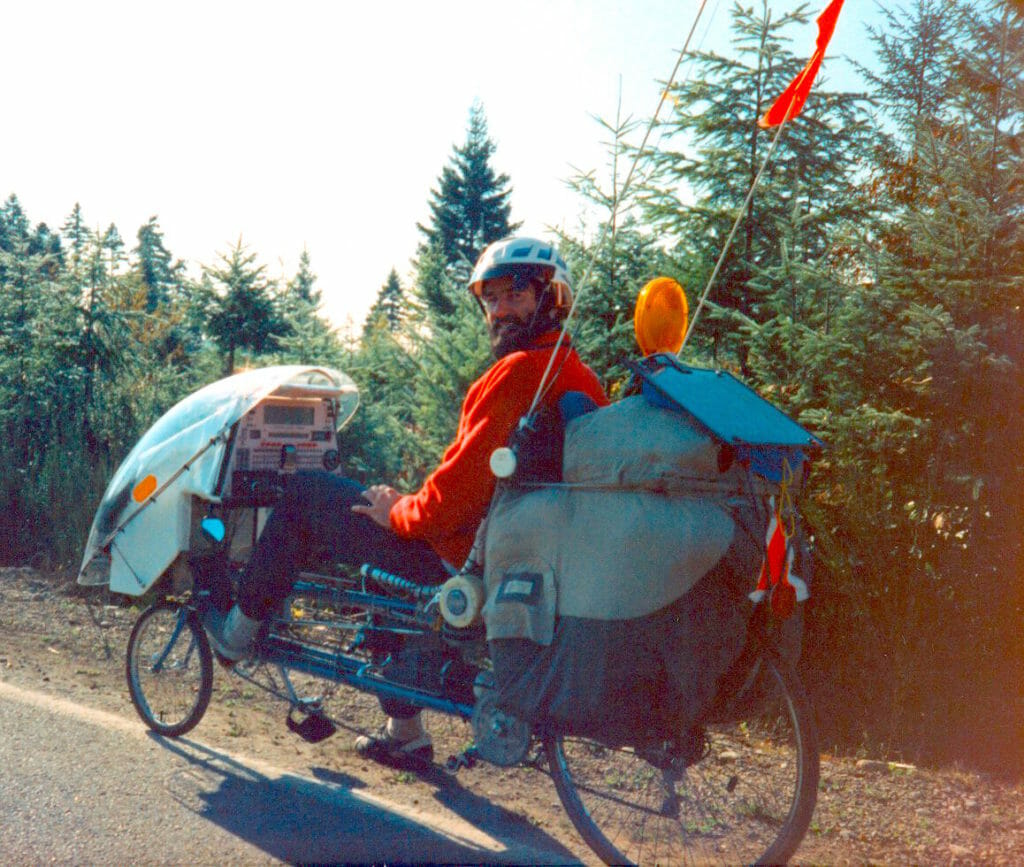 It was dark, late: after midnight. The town — Montesano, Washington; the brain — mildly giddy on local beer and the fuzzy exhaustion of a 54 mile day. I lurked in the wet grass behind the Osterberg Motel, Maggie standing beside me and looking more than a little worried.

I tried the bathroom window and found no handhold. My now-useless Sawmill Athletic Club membership card was tattered from the attempt to jimmy the front door latch, and no lock picking tools were handy. I dug quietly into the wood around the window with a key, trying not to make a sound, but only managed a small pile of sawdust. This was getting us nowhere.

I dropped to my knees, shivering slightly, and groped in the clutter that lay about the old building like the archaeological echoes of a dying culture, my fingers finding and quickly rejecting crumbled wires, rusty bolts, bottle caps, and things unnamable lying there in the dank shadows. Somewhere a door slammed and I stiffened, frozen in the haze of a distant streetlight, waiting for the shout. But it was only a guy walking his dog, and he passed quickly out of sight.

My hand closed around an ancient bracket — something vaguely automotive. “Ah,” I whispered. Prying carefully, wincing at the amplified crunch of old wood, I eased the window open. Giggling sotto voce, I stepped on an old bucket and squirmed through the opening, finding sink and toilet more or less where expected, both creaking under my weight as I lowered myself headfirst to the floor. Ah, travel. I completed the entry, found my way around the bicycles jammed into the stuffy room, and let Maggie in the front door — number 5 — the one with the broken lock that had resisted every attempt to use the key given us on check-in.

It had been a day of northwest autumn images… of wood smoke curling white-on-white through thick morning fog. Of ducks, startled by our passage, scrambling across the Hood canal watertop making tracks on the surface with frantic wingtips and flapping feet. Of herons and gulls, Christmas tree farms, dogs breathing micropuffs, giant mushrooms like pumpkin pies, tiny ones scattered across logs like storybook colonies — and the unnatural quiet of off-season tourist culture. A brisk morning.

Later, on route 108, I pedaled in sadness — bracing myself against the blasts of logging trucks hauling the carcasses of once-beautiful trees and leaving an ugly ravaged landscape like a botanical war zone invented in Hollywood. Now I understood the tree-spikers, as my surroundings alternated between disaster and grandeur, each underscoring the other. I passed from lifeless mountainsides of blackened stumps to great rustling valleys touched with the muted ochers and somber umbers of autumn… from harsh wreckage to quiet perfection with man alone the mediator. Anger. But through every mini-hurricane of a 60 mph logging truck — at once fragrant with fresh-felled fir and rank with diesel fumes — I tried to remember that the man at the wheel was just doing his job. Those aren’t the villains at all… they only look the part.

They’re only villains when they blow me off the road.

We’re southbound for real now; I’m writing from the 295-mile mark, two days from Portland. Puget Sound is way back there somewhere — the people who made it feel as home now fond memories and database records. No more Poulsbo bread, ferry horns in morning fog, midnight milling machine madness, or sunsets over Manzanita Bay. Home is the road. I’m re-experiencing the major adjustment that has to be made when you switch from stasis to nomadics: a redefinition of “home” that lets a modular phone jack, bicycle, and the cluttered living room of an overnight host touch all the places in your heart that were once owned by your old hometown. Yeah, this is a qualitatively different lifestyle, and when I look into the eyes of people here in Centralia I try to remember that I’m even more alien than I look — for reasons that have nothing whatsoever to do with speech synthesizers and blinking consoles.

Anyway. The weather is holding, a record for rainlessness they tell me, and we’re slipping away from winter on back roads, so far unnoticed. Oregon tomorrow, I think — or at least the Columbia River — then on down through the land of contrasts, the state of being, the place where most trends start and most wanderers stop. California will be like glue on our wheels, but there is so much more beyond… wherever that may be.

There was a nice piece (with excellent photo) in the local paper the next day.