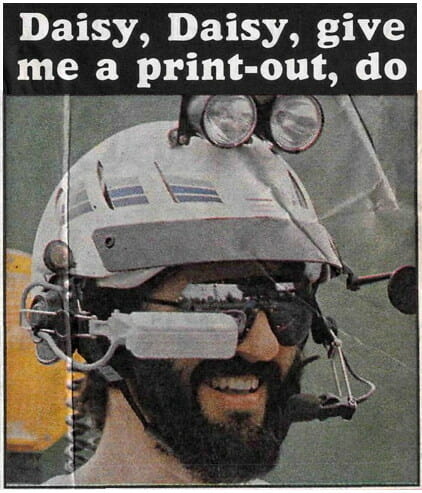 This rather flip, quirky, tabloid-like piece from the UK scored a prime spot in my collection of newspaper articles for two reasons: the title (epic win!) and the head shot… which actually caught me with a playful expression rather than the usual focused countenance of intense technomadic concentration that often seemed to emerge when I was wrapped in the Brain Interface Unit, posing for the camera while performing binary chordal entry of monochromatic text. The article, well, it’s a bit on the light side…

IT LOOKS like something out of Star Wars. But this stylish carriage is not a bicycle built for R2D2.

The £500,000 machine is the brainchild of computer expert Steve Roberts. And he is pedalling it across America on a lecture tour. Steve, 39, has sold his house in Columbus, Ohio, divorced his wife and now devotes himself full time to his two passions — bicycles and computers.

He calls his computerised bike Behemoth. Its space-age design includes a satellite tracking system that can send and receive messages and plot his position to within a few feet anywhere in the world. Four powerful computers are built into the frame.

A two-way radio that allows him to talk to Tokyo as he cycles through New York is mounted behind the seat. A portable telephone with answering machine and fax is fitted over the front wheel.

And in case he wants to relax as he pedals, the 109-gear, quarter-ton bike also has a CD player so he can listen to his favourite Cleo Laine tapes. As if this were not enough, Behemoth is equipped with a voice synthesizer like the computer Hal in the film 2001: A Space Odyssey.

The electronics are powered by solar panels on a trailer. Steve wears a helmet fitted with a tiny computer screen flat pulls down in front of one eye. It also has a microphone through which he speaks to the computer, which recognises his voice pattern and responds to his commands.

Should anyone take too close an interest when the machine is parked, motion sensors will trigger a warning: “You are being monitored by an alien spaceship. Do not touch the bicycle or you will be vaporised by a laser beam.” If this doesn’t do the trick and someone tries to move the bike, Behemoth dials the emergency police number and announces it is being stolen.

Steve, who works as a consultant to computer companies who have provided their products free in return for his evaluations, says: “l used to have a house in the suburbs, a car, a wife, a lawn mower, the whole American dream.

“Now I’m the complete nomad. I have blended fun and technology and blurred the boundaries.”