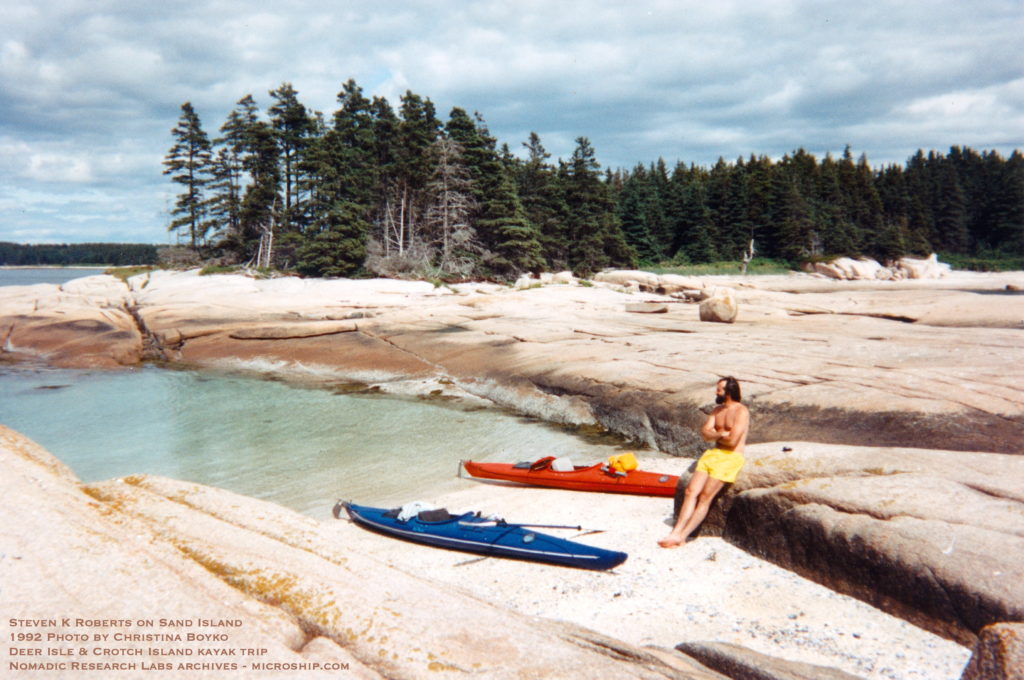 This is a dreamy moment in the arc of adventure… the romantic transition between the end of the BEHEMOTH bicycle epoch and the vision of a geeked-out micro-trimaran.

by Steven K. Roberts
Fulton Chain of Lakes – Adirondacks
May, 1992

I think gravity had something to do with it. Pedaling up the Lake Michigan shoreline in the summer of ’91, I kept gazing out over the watertop, chafing subconsciously at the need to follow a hilly, busy road north around the lake when I really wanted to head east. All I had to do, I mused, was wrap a hull around the bike and connect the pedals to a prop, maybe add a couple of training wheels — er, outriggers — to provide stability and create space for a solar array that could run an electric thruster…

Such daydreams were amusing, but I didn’t take them seriously: there was something about the whole yachting world that wasn’t me, and it just seemed unrealistic. Besides, BEHEMOTH was still a new toy and it would be sacrilege to launch a new project so soon after waving goodbye to all my volunteers and sponsors, awaiting tales of technomadic adventure from the machine they had helped create.

But an unavoidable truth kept resurfacing. Weight and practicality issues could probably be dealt with, but something much more fundamental was afoot — something so absurdly obvious that I was embarrassed at having overlooked it. Quite simply, I had been there before, many times, and the whole bicycle touring lifestyle was routine. The road had become the equivalent of living room walls; riding into a new town no longer represented a panoply of intoxicating options. Camping was a hassle, muscling expensive gear through narrow motel room doors a nuisance, doing the show ‘n tell for new friends tiresome and much too familiar. In the rush of development engineering, frolicking with brilliant techies and prowling the industry for goodies, I had been in my element, having so much fun that the 3-year BEHEMOTH project became an end unto itself. But hauling it down the road was just like the old days, only harder… and the driving energy of discovering new love at every stop had worn thin.

While these realizations were burbling into my consciousness, unbidden and unwelcome, the demand for public appearances continued to grow… seducing me more and more into the next level. How could I say “no” to fat speaking fees, when I was otherwise barely scraping by? More than ever, I was making a living by telling people how I make a living, nudging me further and further from the adventure itself. This was something I was going to have to address someday, but meanwhile, those gigs were being dangled in front of me, tempting me…

I took a deep breath and built myself a Mothership, outfitting a Wells-Cargo trailer as a mobile lab with a big honkin’ Ford F350 dually diesel pickup truck as a tow vehicle, telling myself that I’d periodically launch bike adventures from it during the interstices of my speaking schedule. By 1992, I was on tour full time, but instead of converting pizza into slow-twitch muscle contractions that propelled me sensuously along, I was taking solar power generated millions of years ago and liberating it from the dense matrix in which it had been stored for eons, gobbling diesel fuel to haul my big rig down the Interstates. I became a trucker, delivering my bike to trade shows and corporate venues, then parking, checking into a hotel, cleaning up, and appearing on stage the next day in leggy high-tech nomad regalia to rhapsodize to a rapt audience about liberating technology, the allure of adventure, and the delicious promise of nomadness.

It was a decent business, actually, but how long would I be able to rest on my übergeeky laurels before greasy truck-stop fare and a sedentary life in the drivers seat would turn me into a potbellied has-been, spouting long-practiced but passionless riffs like a declining lounge act in the back streets of Las Vegas? Graying fans from the good old days would shout, “Tell the one about the convicts, Steve!” and I’d dutifully recite the tale of that weird encounter in the Maryland woods so long ago, the accents polished, punchline perfectly timed, yet, somehow…

It was May, 1992, and I was at Interop in Washington, DC… a sweet gig. BEHEMOTH had its own booth, and I was one of two keynote speakers (the other being a fella who ran a war a while back — Stormin’ Norman, talking about “interoperability in the armed services” while his limo idled outside). After my own performance on a more peaceful theme, I settled into booth duty, looking forward to dinner with Net gurus and the hotel hot tub.

She breezed into my life in corporate garb, startling me, all smiling tall and blonde and — wow — I think she just hit on me! Christina was a Unix sysadmin, jazz singer, and sea kayaker… the dance was electric, and by the end of the conference we had a plan. We would rendezvous a few days later in the Adirondacks and explore the waterways in her tiny boats. The implications were dizzying, the sense of major change in the air as intoxicating as frangipani in the tropics… and it wasn’t just love, nor the fever of springtime.

Late. Dark. Loons echo otherworldly laughter from afar, their voices following countless acoustic paths to arrive at my ear as if from the depths of space, the real distance impossible to determine. The moon, almost full, filters through deep woods… patches of flickering motion adding unsteadiness to our walk. The mirror-calm waters of Fourth Lake in the Fulton Chain reflect shorelight, starlight, moonlight, and the subtle glow of a solitary cloud, all perfect in concert like an impressionist nocturne.

Every overused romantic cliché of idyllic moonlit evenings was created for this moment. Claire de Loon…

Christina and I pick our way through the trees to black water and quietly slip into our kayaks — the sensation more of putting on rather than climbing aboard the tiny boats. We adjust to a new reality: afloat in tight craft responsive to our very breath, legs disappearing below decks, feet on rudder pedals, hands gripping fiberglass paddle shafts, rumps a few inches below waterline. Silently, the dock falls away.

We glide into the lake, into the exhilaration of adrenalin-intensified NIGHT. My bow wave is a steady vee; our paddles flash white in the moonlight, rhythmic, hands cranking smoothly like pedaling feet, rotation of the feathered shaft already automatic, satisfaction in the silence of efficient motion. Aimless yet swift, we disappear onto the dark watertop, drifting in parallel like twin spacecraft, silent, alert in the impossible vastness of infinity. Our trajectories merge slowly, trimmed by microinches of pedal movement.

I look over at shadowy Christina, a blonde ninja of the night gliding beside me in beautiful deadly silence, her subtle wake a phosphor line barely visible yet somehow unmistakable. I murmur sweetness and she laughs softly, sound amplified by solitude. Our craft gently collide and we lay paddles across each other’s gunwales to merge them… drifting as one, slowing. Jupiter’s rippled reflection is brilliant. Atop the dark cold Adirondack water at 2 AM, our humanity is a precious shared event and the online world of computerized frenzy is far from our thoughts.

The boats tip as we lean together and kiss — lips soft and yielding, moonlight in eyes, Gran Marnier on our breath, the night perfect. With a giggle we push the boats apart and sprint away, circling and drifting, playing commando kayaker, dancing with moonbeams, hiding in the deep shadows of shore, frolicking like dolphins until the night grows cold and cabin lights beckon…

The next day. Oh my. I could base a lifestyle on this, I observe to myself with an internal grin as sun-warmed shoulders bend again to their rhythmic task, miles passing easily, the day sparkling within and without. (The last time I made that prophetic lifestyle comment was a decade earlier, while pedaling a strange recumbent bicycle along Ohio farm roads and dreaming of technomadic possibilities…)

Perfect, perfect. The word keeps dropping into conversation as it does on summer afternoons in the Rockies. Slipping along wooded shores, at one with the water, the wind light and pleasant. Gliding through narrow inlets and creeks, prowling coves, whispering through aquatic grasses, idling in gentle currents, nudging aside yellow buds of water lilies, pointing out deer on shore, startling a quacking couple shepherding a flotilla of downy ducklings. The muscles of my arms and back growing into a new role, their soreness strangely pleasant; learning the rhythms of power and the behavior of the tiny craft, smiling when a maneuver drops me perfectly alongside my friend to share a moment — or lands me with a whispering bump on precisely the intended spot.

In the southwest corner of Third Lake, my bow touches the edge of wetlands. Marsh, I label it, back-paddling toward open water. “No, no, wait,” Christina calls, “I want to check this out.”

We creep softly into a long crack barely wide enough for the kayaks, pulling up next to a beaver house of stacked driftwood. Covering a couple of acres, this is a quaking bog — a floating ecosystem of cranberries, lichens, sphagnum moss, cattails, orchids, redwing blackbirds, and carnivorous pitcher and sundew plants. We climb gingerly out of the boats — I onto a small island, Christina onto the larger mass… and it’s fluid! She bounces up and down and over a hundred square feet of surface rocks with her; I try the same trick and my island submerges slightly, covering my feet… then it calves, and drifts a foot or so away from the mainland. I pull myself back with the paddle, feeling like a penguin on an ice floe, seeing the world very differently than I had only a day before.

A mad idea, already germinated, is beginning to take root. I want to live like this.

Posted in Microship and tagged Kayak
← Interop Spring 1992Daisy, Daisy, Give me a print-out, do – London Daily Mail on Sunday →