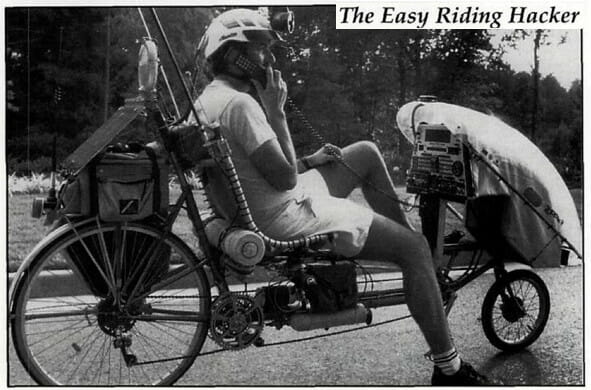 This article by Alan Reiter really captured the technological intensity of early cellular phones… I mounted one on my bicycle in 1988, and became something of a celebrity for that alone. I remember riding the bike through Silicon Valley, and a couple on regular upright bikes passed me. The woman called out, “Look, honey, he has a cellular phone on his bicycle. We should get one of those for the tandem so we can call our divorce attorney!”

Indeed, the industry was working so hard to position itself in the mind of the consumer that a note at the end of this article is a call for “a well-known female who uses or wants to use a cellular phone” since Oki wants to increase its visibility with additional celebrities! (click the second page image to read the full paragraph; I didn’t include it in the OCR’d text below). Here is Oki’s article in their employee newsletter about the sponsorship, and my own article about this installation is in the November 1988 issue of Cellular Business.

by Alan A. Reiter
Telocator
September/October, 1988

Please, please, please let me know what I’m doing. Several nights ago, I had been downloading kilobyte after kilobyte of text from GEnie, an online database similar to The Source and CompuServe. But I had not been hearing the pleasant tinkle, tinkle sound that indicates my hard disk was working. Oh no! Had I been receiving scores and scores of pages, speeding past at 1,200 bits per second, only to find out that they were being erased as soon as they scrolled off the screen instead of saved on my disk?

Luckily, I had stumbled into competence and my computer was efficiently saving the data. At the end of more than two hours, I downloaded 824,832 bytes of information, about 280 fifty-five-line pages. Why I didn’t hear any tinkling, I don’t know. I don’t care. I’m thankful it worked; my blurry eyes are thankful. I retrieved forty-three chapters of a book-in-progress and dozens of articles, all authored by the subject of the first item in this month’s column.

The subject — a resident of what he calls “dataspace” — is an itinerant, telecommunicating cyclist pedaling across the United States on the most gadget-laden bike you’ve ever seen. But to me, a professional (of sorts) journalist, one of the most incredible aspects of his journey is his typing. Sitting on an “ergonomic” desk chair and staring straight ahead at my monitor, I blunder along at thirty-five to sixty-five words per minute, with fingers gaily missing the keys and misspelled words flying about the screen with alarming regularity.

Picture yourself riding a bicycle and also typing on your laptop computer. Difficult you say? How’s this for difficult: try typing each letter in a form of ASCII. Instead of just touching the “A ,” for example, you type a series of zeros and ones for each letter, plus specific codes for upper case, lower case, backspaces, deletions, etc. Now try typing at thirty words — not letters — per minute. Steve Roberts does.

Roberts isn’t exactly unknown. He’s been interviewed by more than 150 newspapers, plus dozens of television and radio stations. Roberts doesn’t ride a traditional bike; he uses a recumbent bike. Instead of sitting on a small seat high on the frame, he sits closer to the ground on a chair-like seat that provides superior back support and power. Though strange looking, recumbent bikes are much easier to ride. Good ones cost $600-$800 and go up to a few thousand, Roberts says. He’s got one of the best…and he needs it.

Roberts is carrying hundreds of pounds of electronic gear, including a two-meter Yaesu ham radio, a ten-eighty meter HF radio, a terminal node controller for transmitting packet data over amateur radio, a Radio Shack Model 100 laptop computer, a Hewlett-Packard Plus laptop computer, solar panels, a CB radio, a tiny Sony television, a VHF weather radio, an FM radio and cassette deck, a Votrax speech synthesis board that connects into his security system so his bike can “yell” at persons tampering with the equipment, lead-acid batteries, a siren and air horn, a bunch of microprocessors and, most recently, a cellular telephone.

In July, Roberts pedaled to Oki Telecom in Norcross, Georgia and got a CDL491 transportable phone. Roberts and Oki personnel spent two and a half hours discussing the installation before they spent the rest of the day doing it.

There were four major considerations, says Gray Rittenburg, the technical trainer for Oki who conducts the company’s service seminars and installed the phone. First, the phone had to be protected from the bumps and vibrations of the road. Second, Roberts wanted hands-free operation. Third, when not in the hands-free mode, he wanted to use the microphone and earphones that are attached to his helmet. Fourth, he wanted the phone attached to the bike but easily removable for portable use, Rittenburg says.

Rittenburg first mounted pads of thick foam on the frame directly in front of Roberts. Then he hunted around for a spare CDL400 series transceiver cover, which he installed on top of the foam. Next, he attached the control head to the cover. The cables were run from the control to the transceiver in the saddlebag behind Roberts’ seat and the antenna was installed on the rear fender.

Oki gave him a couple of extra batteries and Roberts says he will try recharging them from his solar panels. The Solarex panels generate twenty watts of power and he’s installing more panels to generate an additional fifty-five watts. The extra panels will be located on Roberts’ aluminum frame “trailer” which is attached to the rear of the bike. The trailer also contains a tent housing his cooking utensils, clothing, flute, test equipment and microfiched reference materials on the bike’s construction and electronic systems. This guy doesn’t fool around! (Actually he does — and that’s the beauty of his life.)

Roberts has supported himself by writing more than a hundred articles, scores of columns for online database systems, plus four books. Many of his articles and columns are available on GEnie, where he operates his own bulletin board and where I downloaded a great deal of its contents.

When biking on the road, he uses a reconfigured Radio Shack Model 100 laptop computer for first drafts. The guts and screen of the laptop are attached to the bicycle’s frame directly in front of him. He’s installed four pressure-sensitive keys on each of the two handlebars that control the bike so he can type in ASCII as he’s riding. “In practice, it’s easy — a lot like playing the flute — with each combination accepted by the system when all the buttons are released,” he writes in one of his articles. When not pedaling his bike, Roberts uses the Hewlett-Packard laptop.

In the past, he transmitted the majority of his articles via landline modem from his laptop computer. (No journalist worth his word processor stoops to sending a story on mere paper anymore.) Roberts often has had to use those notoriously finicky acoustic couplers to connect his laptop to a phone in a telephone booth or a motel room phone without an RJ-11 jack. For personal messages, he transmits data over his amateur radio setup. He sends the information to another ham who patches it through to the GEnie online database service.

With cellular, he hopes the days of struggling with acoustic couplers are over. Instead of fooling around with the couplers or searching for an RJ-11 jack, he’ll be able to transmit his data directly via cellular. The cellular phone is his latest — but not last — equipment addition. In the future, Roberts wants to add a television camera to transmit images over his cellular phone. He already has an Etak compass and wants to add a satellite dish, a vehicle location system, facsimile machine and a dual channel oscilloscope.

You might even have seen Roberts and his bicycle at an electronics or telecommunications convention, such as at Oki’s booth during the Comdex computer show in Las Vegas in November.