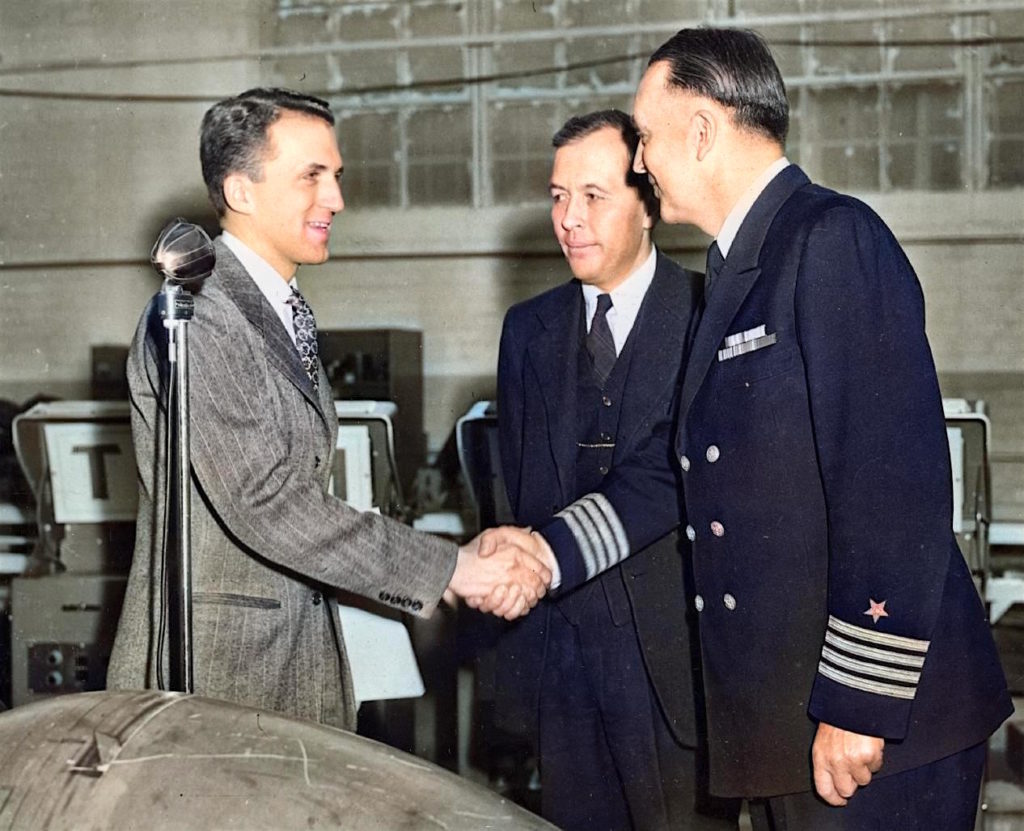 Caption to colorized 1946 photo above: Certificate and lapel emblem are awarded to Edward H. Roberts, refrigerator cabinet engineering section, for his contributions to research and development of plastics products for the Navy during the war. The award was made in Pittsfield March 25, by Captain Ralph O. Phillips, Naval Ordnance, Washington, D. C, shown congratulating Roberts. In the center is William H. Milton, Jr., manager of the plastics divisions.

Before my father designed the aluminum ice cube tray and moved on to refrigeration engineering, he spent time during WW2 at GE Erie Works developing rocket tubes for the US Navy. This article gives a bit of that history, and in his archives were photos of the award as well as the whole team.

E. H. Roberts Cited by Navy for His Work on Rocket Launcher Tubes

“For outstanding performance in connection with research and development of laminated plastics tubes for rocket launchers”, Edward H. Roberts, of the refrigerator cabinet engineering section, has been cited by the U. S. Navy.

Roberts received a certificate for exceptional service to the Naval Ordnance division, and a lapel emblem’ during ceremonies held Monday, March 25, in Pittsfield.

Twenty-two individual and 175 organizational awards were presented. The program was coincidental with the opening of the new pilot plant of the engineering development laboratory of the plastics divisions… in the letter of notification of the award, “a symbol of appreciation for untiring efforts and keen technical proficiencies, which you have conscientiously displayed.”

The dependence of the armed services upon the scientists of the country was one of the principal lessons taught by the war, it was declared by Captain Ralph 0. Phillips, U. S. Naval Ordnance, Washington, D. C, who presented the awards. “There has been engendered on the part of the service a healthy respect and great admiration for the professional competence and the integrity of purpose of men of science,” said Capt. Phillips. “This is especially true here at General Electric where your scientists and technicians, your skilled engineers… [part of text missing]

This is a relic from early in the project, working with Lt. Colonel Hornsby at the Army Air Forces Proving Ground: