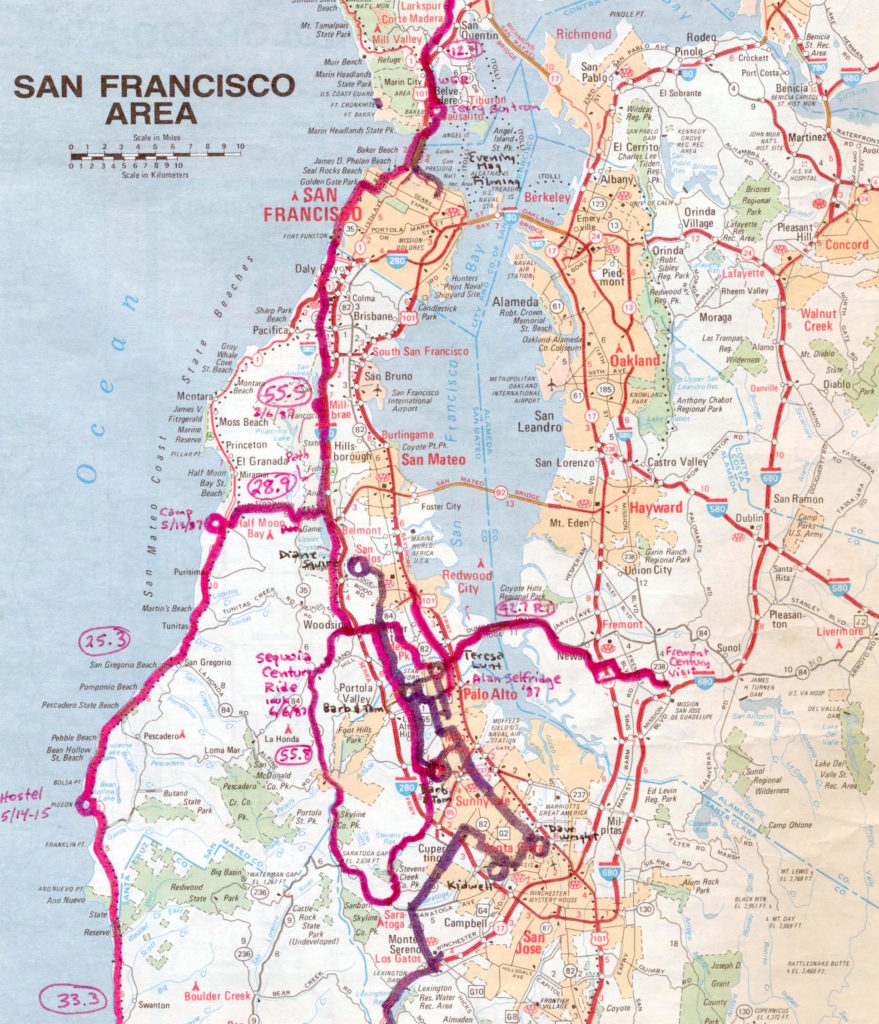 I’m on the beach at Half Moon Bay, the evening calm almost disquieting after the unrelenting noise of the City. It feels good, damn good… Maggie and I grin at each other every few minutes, gush something about being back on the road at last, then fall into each other’s arms for a trembling hug. Three months we stayed in Palo Alto — and despite all the productivity of the layover, this return to movement has the sweet flavor of liberation.

Our new porta-condo, all 108 square feet of it, is sprawled in a field of purple and white flowers. Maggie’s over there, backing her trailer into one of the garages (the tent’s vestibules are large enough to hold our rolling chests-of-drawers and still allow bodies to pass). Birds twitter and scree; surf rumbles; small planes buzz the beach; my toes dig like autonomous prairie dogs into the soft, welcoming sand. We’re doing it, we’re finally doing it!

It began as any other pedaling day: we let all the conflicting snippets of road advice null each other out, meandered through residential areas as long as possible, spent a misleadingly lazy hour on Cañada Road, then hit 92. Whoosh! Big-time motorized urgency! Though this is the easiest pass over the mountains for our atrophied cycle-legs, it’s also the busiest — freeway-like traffic on a winding 2-lane road with shoulders that vary from adequate to nonexistent. You can almost live with that, except when the pavement abruptly disappears on right-hand switchbacks and the wheels of a Big Rig drop into your space… or when some redneck (yes, even in California) leans on his horn while crowding you into the glass-sparkled gravel, the seconds of his life so precious that he gladly risks all of yours to make each one of his count.

Ahem. But those are just moments. In Half Moon Bay, the crowd was delightful, plying us with smiles and the addresses of distant friends while marveling and tsk-tsking at our survival of 92. The obligatory small-town newspaper interview, the shopping for provisions, the surprise offer of free tooth-cleaning by a young local dentist <flashy grin>…

And then a surprise. At the State Park campground’s check-in station, we paid our $2 for space in the hiker-biker area and were informed by the guard that there was a surprise in store — whereupon she produced a cooler and handed it over the counter. Inside, on ice: bananas, oranges, watermelon, and Gatorade… a gift from Melissa of the Pigeon Point Hostel, 25 miles down the road.

We awoke comfortable, well-rested. The camping experience has changed completely since last I wrote of it — with roughly 20 cubic feet of pack space, we now carry folding stools, the megatent, and even, yes, even a pair of big fluffy feather pillows. This all seems insane, decadent, a violent departure from the spirit of camping (whatever that is), but hey, why not be comfy? I never was the macho outdoorsman type anyway…

We emerged lazily and fed stale danish to a bead-encrusted drifter who, the night before, had circled the campground seeking “doob” then crashed unfulfilled under a picnic table. Our own breakfast was a celebration of the 50th anniversary of canned porcine DAF (dead animal flesh) with a classic Spam ‘n eggs breakfast: on the road, every little event, even an embarrassing repast like that, is flavored by the exotic spices of Change.

After rolling back into Half Moon Bay for Dr. Leupp’s dental work, we hit the road again — sun baking shoulders, sweat glistening on bellies not yet road-lean, the hills of California rewarding hours of 4-mph effort with minutes of 40-mph ecstasy. The usual ratio. But there were great sweeping vistas of surf and sun, vegetation that would cost $50 per square foot in potted form back east, waves from passing cars, and thumbs-ups from leathered bikers. We stopped at every temptation, whether an alluring beach, a hint of tidepools, a particularly breathtaking view, or the flower raised like a toast by the weathered hairy chap in purple jogging suit who spoke cryptically of Magic Elixirs.

I rode along, making bike-notes in a file called FIX and comments for this article in one called GE28… and then came to the hostel.

Ah, hostels. I’m always delighted by these places, these dynamic monuments to the wandering spirit. Much of their appeal lies in absolute unpredictability — hostels are quite the opposite of motels. If you seek plastic key fobs that you can drop in any mailbox, split-image postcards with both aerial and in-room views, wake-up calls, bolted-down TV sets, and little paper strips that are Sanitized For Your Protection… go ring a bell for service and plop down a credit card. But if you want unpredictable roommates, a melange of languages, morning chores, dubious mattresses, no security, and a lights-out curfew — all for only $6/night — try a hostel.

Why go through this? Why prefer crowding and confusion to, say, the Regency Hyatt with its grossly overpriced veneer of luxury? Well…

The vaporous community of travelers condenses every night, forming circles around campfires real or imagined — all over the planet. Stories flow as friendships form; even the part-time nomads swap equipment tips, road advice, addresses, and snippets of their native culture. The net effect? A sense of family that keeps the mad anonymous rushing unknowns of the highway at bay. Safety. Warmth. Home.

The same need touches everyone on the road, even business travelers: watch the action in a Holiday Inn cocktail lounge sometime as people struggle with internal battles between loneliness and shyness, tipping the odds by tipping the elbow, hoping someone else will make the first move.

But hostels make it easy. There are no more walls than necessary.

Pigeon Point is a delightful discovery. We’re living at the base of a 115-year-old lighthouse perched on a cliff, a place steeped in maritime history and named after the most famous of a series of shipwrecks on the foam- swirling black rocks jutting offshore (the Carrier Pigeon, lost in 1853). Lashing the foggy night at 10-second intervals, the light has become one of the best-known navigational features of the Pacific coast. It’s been automated for years, of course, so the cluster of former Coast Guard housing surrounding the tower is now a hostel.

And what a hostel it is! Last night we arrived in a flurry of excitement, the rapid-fire questions and comments colored by the speech patterns of a half-dozen different countries. Natural drinks from Odwalla in Davenport (“Juice for Humans”). Bright, alive faces; knowing smiles; other cyclists. Melissa of cooler fame, shaking her head and grinning. And as we all walked to cliff edge for sunset and stood amid the ice plants and rocks with the lighthouse towering behind us, I recalled once again the hosteling allure that almost always makes them ideal places to stay. (Imagine instant rapport and food-sharing with a community of guests in a Motel 6 along the freeway…)

Night. I sprawled in the hot tub with three pretty women — a German, an Aussie, and a Buckeye. The German, young and new at this, had been uncertain (asking in broken English if she should bring soap). The Australian, a wise and confident traveler named Lynora, was an emigré of the computer business who felt, at age 30, that it was time to start thinking about her own life before that of the company. And the Buckeye was a woman who had abandoned her stable small-town midwestern lifestyle to join the Computing Across America Traveling Circuits. Four different accents, four different lives, drawn together under the stars atop a cliff, tangling legs in rumbling hot water while gazing out over the rumbling cold.

Beside us, heaps of clothes glowed a ghostly green in the indirect lighting. Above us, starlight danced its way through a 3-mile refractive jumble after light-years of perfect clarity. Seaward, their glittering pinpoints softened into mist, then disappeared behind a cloak of fog that seemed the product of our own tub-generated steam. And through it all, insanely surreal like the set of a science-fiction movie, lashed the thick 680,000-candlepower beam of the Pigeon Point lighthouse, beginning immediately over our heads and ending somewhere out there, sweeping the horizon. Every ten seconds the cycle repeated, arresting, intriguing, as much an intensification of night as a busy Air Force Base or a head full of Magic Elixir. The German, the Aussie, and the Buckeye lay their heads back on the deck, half out of the luminous froth, gazing quietly skyward as light played gently across smooth wet breasts — as soft breath merged with the steam, merged with the mist, and merged us all into a single pulsing universe of light and color.

It’s so easy to forget this in the swirl of distraction, noise, and responsibility. So easy to forget the infinite range of possibilities; so easy to believe the fiction about America’s media-driven homogeneity. We may have a lot of the same icons and news jokes, but there’s a diversity out here that quite outdistances the imagination. Why, anything is possible in a land where, in a single month, one man can collect $8 million by claiming that God will kill him if he fails and another can lose a presidency by being accused of doing what any man would love to do. It’s a strange land, as limitless as life itself, and I’m delighted to announce that I’m once again loose in it.

The doors of the shop are closed. We’re on the road.