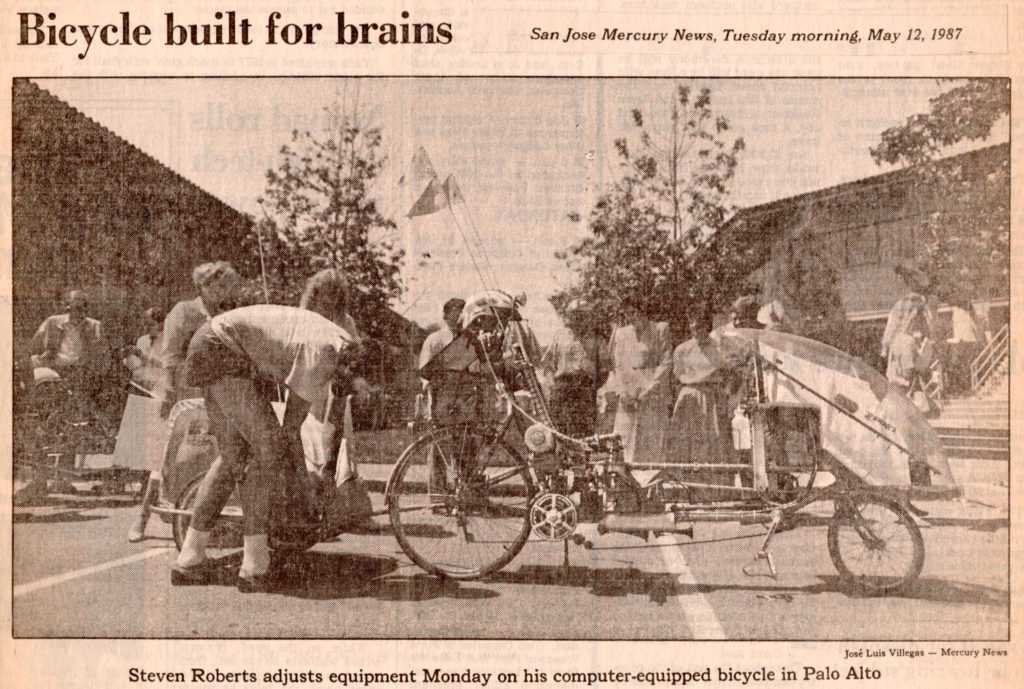 Steven Roberts describes himself as a typical high-tech junkie.

He loves to tinker with his five computers, talk on his ham radio and play with his speech synthesizer in between freelance writing assignments.

But he admits that his office is a bit unusual — a two-wheeled recumbent bicycle with a solar-powered computer panel, keyboard and screen built into the handlebars.

Roberts, a self-proclaimed high-tech nomad, sold his suburban Columbus, Ohio, home and embarked on his life of permanent journeying in 1983. Since that time, he has logged 12,000 miles on the road — running his business, doing research, collecting his mail and paying his bills, all by way of his computers and an occasional pay telephone.

Quite proud of his contraption, which looks like a cross between a 747 cockpit and a toy Big Wheel, Roberts decided to take it for a spin Monday through the Stanford Research Park in Palo Alto to show it off for some real Silicon Valley types.

He attracted a large crowd in one parking lot, where the high-tech employees’ questions about computer wiring, solar power and the electronics underneath his bike’s plastic hood were a far cry from the reaction Roberts received in most parts of the country.

In Christiansburg in rural Ohio, Roberts got the once over by a farmer when he stopped at the town’s only phone booth to hook up his computers.

“He looked at my bike, and he looked at me, and at the couplers and wires hooked up to the phone,” Roberts said. “He finally spit out some tobacco and said, ‘Hey, you’re with NASA, right?'”

Roberts’ bike attracts attention, both for its unconventional shape — the rider is in a reclining position — and for what is underneath the plastic bubble shield.

Roberts has designed the nose of his bike to hold five computers, which are protected from rain and snow with Velcro cover. The “dash” contains a display screen, a radio, a compass, a speech synthesizer, dozens of switches and knobs, and a keyboard made from phone buttons that he uses like a court reporter’s machine to type words and combinations of letters. He moves the cursor by pressing buttons on the handlebars.

When Roberts is on board, the whole thing weighs 400 pounds and could be “like a 3-horsepower lawn mower pushing a 3-ton motorhome.” But he solved that problem with 36 gears — enough to easily clear the Rocky Mountains.

While on the road, Roberts writes whatever he can sell, from travel to technical pieces, to features about the folks he meets along the way. He uses an on-line research system, the Palo-Alto-based Dialog, whenever he needs background information, whether he’s in Abilene, Texas, or Myrtle Beach, SC.

Roberts has been in Palo Alto for a two-month layover to make some adjustments to his computer system before leaving for his second cross-country trip, this time through the northern United States.