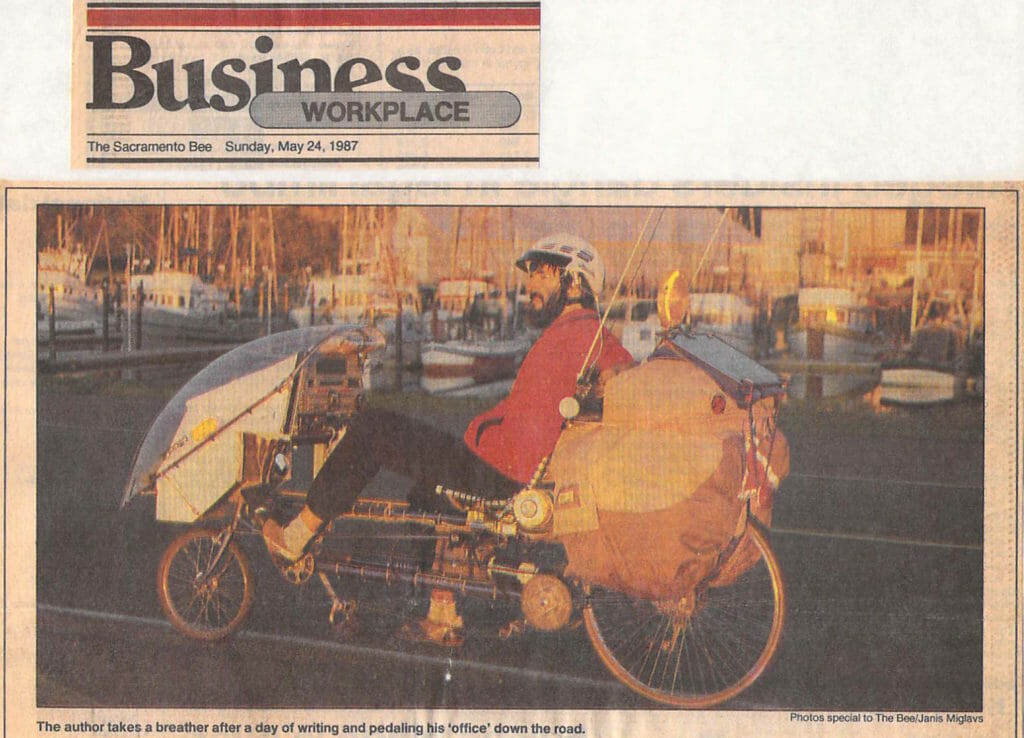 This is an unusual item, as it is under my byline. Usually I wrote for magazines, and the newspaper stories were by reporters. The excellent photos are by Janis Miglavs, taken in an Oregon coastal town in late 1986 while Maggie and I were pedaling down the west coast. The opening shot appears more sharply in the 1988 Bicycling Magazine calendar (and you can click on that page for a larger version).

In rural Ohio, among the white clapboard houses and autumn maple trees of Christiansburg, the sun glinted off the solar panels of my eight-foot-long recumbent bicycle. I was hunkered over my bicycle’s computer, which was plugged into the town’s only pay phone, linked via satellite with a distant publisher. Tiny letters of text scrolled across the display screen.

An old farmer rattled up to the curb in his battered pickup, squeaked open the door and headed for the M&M Cafe, wearing a billed cap and green coveralls. He squinted at me, then at the computer, then at the modem cable dangling from the familiar pay phone.

He looked at the bike, at the strange linkages and controls, at the blinking LEDs — slowly shaking his head at the apparition that had materialized in his quiet town. Suddenly a look of understanding lit his craggy features.

He spat tobacco juice into the weeds and peered at me quizzically. “You with NASA?”

I grinned at him. “Why, yessir. This here’s one o’ them Loony Excursion Modules…” We stared at each other for a moment like representatives of alien cultures, then both laughed.

The encounter, barely 100 miles into an adventure that has now passed the 11,000-mile mark, set the tone for the whole journey. I have finally found a job I like: high-tech nomad.

Free-lancing through the years, I have slaved away in bedrooms, living rooms, industrial parks, basements, cubicles, and posh offices. The same problem always surfaced sooner or later — lack of change.

My new mobile office is different. It materializes wherever and whenever I need it — and though there are plenty of distractions, I never have the same one twice. By its very nature, my mobile office is a stimulating place (sometimes even a thrilling one), and for the first time in my career, working is as at least as much fun as playing. In fact, they are inseparable.

I live in a world that is part bicycle, part computer network, and part kaleidoscopic amalgam of lifestyles that span the full spectrum of human behavior. My office is a computerized 36-speed, 220-pound, 8-foot long recumbent bicycle bedecked with solar panels and enough gizmos to re-seed Silicon Valley after The Big One. While traveling full time on this machine. I maintain a free-lance writing business — the ideal way to get paid for playing. With occasional layovers for major projects, I have been doing since this late 1983, cranking out some four million pedal strokes, and about the same number of keystrokes.

This all may sound idyllic and romantic, but making such a caper work requires much more than chutzpah and leg muscles. How can an intense, information-oriented business — an activity that depends on word processing, photocopying, proposals, filing, business planning, invoicing, and all that — be operated from a pedal-powered contrivance upon which every ounce counts? How can the illusion of stability be maintained when dealing with such staid institutions as banks and insurance companies? And, perhaps most important, what are the tools that have allowed me to break the chains that once bound me to my desk and make a living anywhere with virtually no overhead?

The electronic cottage on wheels that supports my nomadic lifestyle would have been impossible as recently as five years ago. I have more than a megabyte of memory on board, serving a closely linked network of five microprocessors that work together in a variety of ways. The systems all run on solar power. They roll down the road aboard the latest in human-powered vehicle design. And they communicate with the rest of the information universe through computer networks and packet satellite links. My “Winnebiko” grows as technology grows, slowly evolving along with changes In physics and software.

In a sense, of course, this entire caper is a caricature — but it is an instructive and entertaining one, applicable to a wide range of lifestyles and businesses. My “Computing Across America” adventure is a case of personal computers and network communication carried to an exquisitely mad extreme.

The essence of the journey is information. I inhale it, store it, fiddle with it, and disgorge it in the endless attempt to keep myself alive in the free-lance writing business. This is an ideal enterprise for a nomadic generalist, of course, for everything is copy.

But writing on the road turns out to be an challenge, particularly when the load-carrying capacity is that of a bicycle instead of a motorhome. Cassette dictation is a pain, yielding non-editable speech that never seems to get transcribed. Stopping to jot notes is too much trouble. It has to be electronic.

During my first 10,000 miles, I carried only one computer. Though it was an astonishingly robust system (the Hewlett-Packard Portable PLUS), I still couldn’t write while riding. Since 10,000 miles corresponds to roughly 1,000 hours of pure pedaling time (half a business year), this is no small matter — I had far too many days of good ideas, good intentions, and no work output.

What I needed in addition to the HP was a bike-mounted system, an electronic web to capture my ideas and store them for later processing. I wanted to find a machine that would support word processing, long-term file storage, daily electronic mail, and a number of other information-processing functions … all on the bicycle itself.

I took a year’s sabbatical from the road and dedicated myself to building a different system. The original intention — being able to type while riding — quickly evolved into a complete bicycle control and communications system — not only turning the Winnebiko into a mobile office but also starting so many on-the-street conversations that anonymity has become impossible.

The principles are simple enough. The bike carries five computers, which work together in ways that vary as a function of the type of work in progress. When I’m not pedaling, the only one in use is the HP. Articles or book chapters become files, which are then transferred from the first available telephone to my Ohio office via electronic mail. The HP performs other jobs, but its primary use is textual.

When I’m on the road everything changes. As ideas flow from the rhythm of the pedals, my fingers dance a quiet staccato on the handlebars. They move as if playing a flute, pressing combinations of eight waterproof keys to yield any of 256 binary codes — a convenient handlebar/keyboard that will type both letters and control characters. Up in the console the bicycle control console reacts — decoding the incoming data into a modified Radio Shack 100.

The net effect: smooth, machine-readable text captured while I’m on the road, yielding files that can be transferred to the HP for fine tuning and subsequent transmission.

Bike writing was the main motive, but with all that solar-powered processing horsepower on board, it was inevitable that a few other functions would emerge. The battery-charging process is now under computer control, as are the security system, self diagnostics, electronic compass, and more.

Give me a telephone and I’m home: all it takes is connection of the computer and a few typed commands. I meet my closest friends, keep up with the activities of my Ohio office, publish weekly travel tales and seek help with arcane technical problems.

This is central to the journey, for it provides daily communication without those traditional wanderers’ hassles of general-delivery mail and telephone tag. I have an assistant in Ohio named Kelly. All communication is tunneled through her; business correspondence is processed and reported on line; phone calls are forwarded electronically. She handles money, prints and mails manuscripts to off-line publishers, and keeps old friends up to date on my activities.

And home is wherever I happen to be — as long as there’s a telephone nearby.

The computers are just part of the Winnebiko system, though their direct influence extends into every corner and their complexity has required an onboard microfiche documentation library. Of nearly equal value, from the lifestyle standpoint, is the communications gear.

My mobile ham radio station allows me to stay in regular voice contact with my traveling companion, Maggie. With a boom microphone built into my helmet and a push-to-talk switch on the handlebars, she is never far away.

A CB radio is also on board, valuable enough to justify its weight. I can talk to truckers or hail a passing motorhome for water (this saved my life In central Utah).

System security is as important an issue as survival when living on a machine that looks like a rogue NASA creation. But it’s not that people try to steal it — most are intimidated by the technology — it’s just that some let their curiosity extend to flipping switches and occasionally even climbing onto the seat and bending the kickstand. To alert me to such behavior, I added a paging security system with vibration sensors. Detected motion causes it to transmit a signal that triggers my pocket beeper up to three miles away.

Other radio-related devices include a Sony digital shortwave for international broadcast reception, a Sony Watchman micro-TV, and an FM stereo. Naturally there is also an audio cassette deck, and a compact-disc player is planned for under-dash installation soon.

Then there is the matter of power. All the equipment described so far, plus behind-the scenes control circuitry, requires electricity — in six different voltages. A pair of 10-watt photovoltaic panels serves as primary source, providing about 1.3 amps to the 12-volt Ni-Cad batteries under ideal conditions. The charging process can be digitally monitored from the front panel, and the bicycle control processor intervenes if the batteries are in danger of overcharging. When too may cloudy days occur back-to-back, a power supply with line cord allows refueling from house current.

Other front-panel instrumentation includes a solar bicycle computer to display speed, distance, cadence and so on. This is flanked by an altimeter, a two-line LCD for the electronic compass and other sensors, time and temperature display, and assorted status indicators.

The recumbent riding position not only allows greater power to the pedals, but also eliminates all the traditional cycling sore spots (shoulders, neck, crotch and buttocks). As an added benefit, I can actually see the land I’m riding through — looking around from my lawn-chair-on-wheels while those on conventional frames stare down at the road. And on top of all that, the recumbent can carry more (try 220 pounds plus rider on a regular bike).

Franklin Frames of Columbus, an outfit with long experience in making tandem bike frames, helped with the design and construction.

The resulting machine was designed for full-time, heavily loaded touring. The handlebars are under the seat, with a linkage of stainless steel tubing connecting them to the front fork and its 16-inch custom wheel.

All of this taken together yields a remarkably liberating system, providing not only the tools to work anywhere but enough media interest to keep the writing business growing. The whole affair is a cultural door-opener — attracting interesting people in every town and keeping me well provided with story material and personal satisfaction. It’s a freelance writer’s dream: a self-sustaining existence of tax-deductible, full-time research and subsequent writing. For a confirmed generalist, the combination is so addicting that ending the journey may be impossible.

Posted in Articles by SKR, Media - Winnebiko II and tagged new-archive
← Escape from the CityKinetic Madness 1987 →