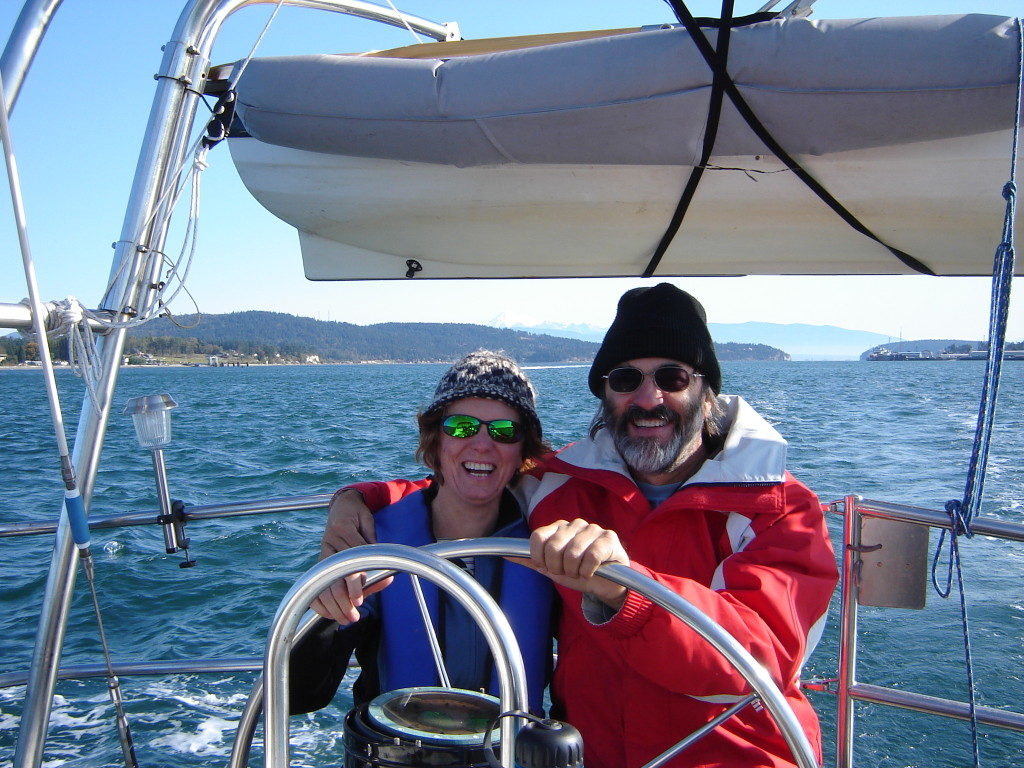 I’ve often moaned in these electronic pages about the inefficiency of my current facilities; despite seeming, on the surface, to be a sort of geek paradise (3000 square-foot lab in the woods), the reality borders on absurdity. With the boat a 3-hour round-trip drive away, the rhythm of the project is the precise antithesis of the Deep Immersion that is required… I work in burst mode, make lists of what to bring next time, and constantly need whatever isn’t where I happen to be.

Last week was a good example. With a few things rising in the queue to a level of urgency, we drove over to the boat, gave her a once-over, and dove into a couple of tasks… Number One confirming the templates for magnetically attached reversible curtains, the Captain deploying a hole saw on the picnic table to install Wema sensors in the access plates on the wing tanks:

So far, so good. But the sensors needed to be cabled with fresh stuff since the old connections were inaccessible, so that went on the “next visit” list. I fiddled around a bit with some of the other upcoming projects, made some notes, did a bit of online research, and vowed to get more done next time. Back on the road, another week gone by.

This is not very efficient, especially as I get into the deeply interactive projects that will require continuous movement between lab and boat. Actually, the on-board facilities are not bad… I rarely lack for a tool, and the stainless fastener inventory now reflects general consumption well enough that I can usually find what I need. But big projects are looming: waterworks installation, the new console, Outback power management system and new battery bank, binnacle nav station, solar array, redneck bow thruster, new water heater (the old one just moved to Reno via eBay), a dozen or more distributed nodes with associated sensors, and a few other things.

At the current rate, this will take until well after the end of the Mayan calendar, which is not quick enough.

So another little side project has been added to an already insane workload… finding a new home base.

Actually, if done within the budget of the existing one (since a mortgage banker would chuckle heartily while hustling me out the door), this could actually lower operating costs by eliminating monthly moorage fees while significantly increasing operating efficiency. All I need to do is trade 11 acres in the woods for about 2 on the water (with suitable lab space), then make a quick lateral move. Sounds sane in principle, but it is fraught with peril in this broken economy and I find the prospect at once enchanting and terrifying. We’ve been looking, though, and it is a long shot but not impossible.

Of course, what that means is that I’d really enjoy hearing from someone who is currently on a quest for this flavor of “home” so we can make the transition to that one. Need an unusual bit of forested real estate with a shop that’s three times the size of the house?

Moving into the domain of unreal estate, my online store is now a reality! Learning curves have been steep (and are certainly not over); the past week has seen Zen Cart installation and configuration, beating my head against the wall over download-server issues only to eventually uncover a directory permissions error (always the culprit, it seems, and thanks to the Zen Cart forum for spotting the bug), getting the SSL certificate, making the link to PayPal IPN, adding a little scattering of products, making a test sale to Sky so I could watch it all work, corresponding with vendors, planning the PDF monograph series, setting up the USPS API to automate shipping calculations, and otherwise doing everything other than actually making sales. Of course, it’s only been about 3 days, and the shelves are kind of bare, so I’m not panicking just yet.

The design is primitive, just the default template with minor changes:

Once it has been running for a while and I’m less intimidated by the thousands of knobs on the back of the set, I’ll work on making it more beautiful… but for now, the important thing is getting a good range of products online. It’s shaping up to be an interesting mix: documentation and kits for my own designs, off-the-shelf geeky boat gadgets, NMEA2000 cabling and sensors, APRS trackers, GPS dataloggers, Arduino stuff, prototyping goodies, general electronic kits/parts/tools, LED cabin lighting, networked video security systems, fabric products, books, favorite nautical toys, embedded Linux boxes, and surplus from the Microship lab.

Though this sometimes feels like a bit of a distraction from the central task at hand, it’s actually a business model that has worked for me in the past: focus on my geek projects while being a silicon-pusher on the side and documenting the gonzo engineering via magazine articles and books. The tools have changed a lot since the ’70s, of course, but the basic trinity is identical and very familiar. It’s also scalable in the sense that I can continue writing from the boat, and after departure the store can be operated by one or more employees (assuming some cash flow…).

Starting a business in this economic climate does seem a bit mad, but startup is incremental and the whole thing boils down to a DIY-focus… which reduces costs for people. My initial list of 15-20 technical monographs is about 50% how-to material (with the other half focused on gizmologically intensive projects of more limited appeal). If I can save a few folks from the annoyance of paying big bucks for work they can do themselves, then we all win (except, perhaps, for the people doing said work, but it’s hard to feel too guilty about that after my recent experiences with plumbing and hydraulics). There’s still plenty of room for hired specialists and true artisans, but a surprising number of boatfolk seem to assume that anything even remotely technical requires paying hourly wages to an installer.

This gets fun in the context of the new store, since my intent is for it to grow well past the geeky little niches in which I happen to be comfortable. There is a wide range of expertise out there, and one featured product category is a library of downloadable documents… some by me, and others produced in partnership with experts in various fields. It might introduce occasional editing and production-values issues, but the plan is to invite anyone with clear knowledge of a boat-related technical task to write it up and let me add it to the collection.

If this triggers a little “aha!” moment, please get in touch and we’ll talk. I’m guessing it will be a 50-50 split of the proceeds, and once there is a critical mass of material “in stock” to justify linkage, I will put some marketing effort into building traffic. Have you solved a mechanical or electronic problem, done a complex installation, learned the details of a product, invented a new tool, reverse-engineered an older system, eliminated RFI, or otherwise accumulated some boat-related technical wisdom that others might pay the equivalent of a couple of beers to read about? Can you express it clearly, with sketches and photos as needed? If so, drop me a line, and let’s turn it into a nickel-generator.

(Hats off to Don Lancaster for that eternally useful turn of phrase, first used in his classic Incredible Secret Money Machine.)

While all that has been going on, I have not been ignoring the ship. In addition to the long-awaited completion of diesel-sensor installation, I’ve gotten Node S happily blinking in the lab (viewable via a network serial server), made progress with my fabrics consultants on some very cool curtains, edged closer to console fabrication with specs on the hardware, watched a few more things head off to new homes, gotten Satie’s Gnossienne No. 1 under my fingers and started No. 3 whilst eying the tasty No. 4, and designed the ‘HC595 driver architecture for a huge mat of latching relays.

Posted in Nomadness blog and tagged Camano Island, online store
← The First Node Flickers to LifeEscape Velocity and the Crash →