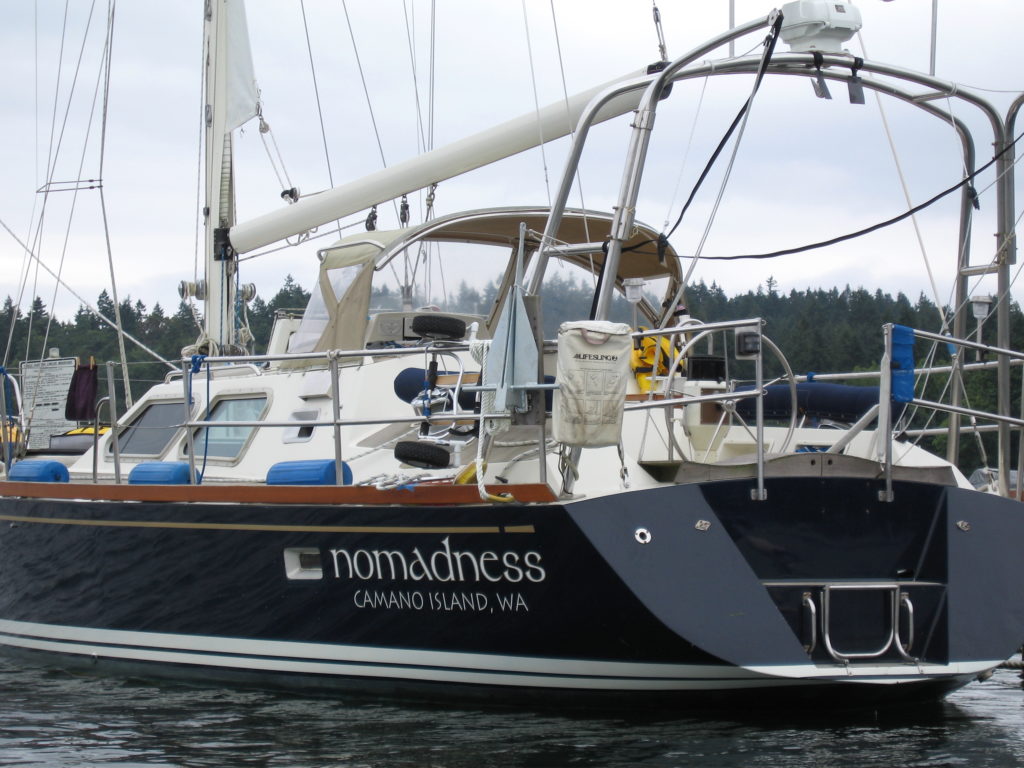 My head is a-swirl with data, extrapolated subjectively from imperfect measurements and flawed instruments. There’s the Link 10 that randomly resets itself, forgetting the status of the batteries. The Xantrex inverter that would like to charge at a decent rate but overheats when I attempt to do so. The trio of diesel tanks that offer up level-sensor data that is apparently random, requiring me to monitor engine hours and estimates based on RPM. The Simrad AP24 autopilot that can take 15 minutes or more after being powered on to allow itself to begin actually piloting. An excellent bit of navigation software (MacENC) that runs on my laptop down below… not outside where I need it when driving. The new holding tank (still mysteriously stinky) that requires opening its stowage bay to observe the level.

All of these things are soluble, of course, and many of the imminent projects have to do with not only fixing bugs but going well beyond to build a homogenous layer of modeling atop the ship’s many systems… allowing me to see it all at a glance from a browser. We’ll get there. But in the meantime, there is an added challenge to voyaging that comes from receiving a flood of data that is often misleading.

That is tricky enough when trying to maintain an internal mental model of a huge old battery bank, but it gets downright scary when navigating in an unexpected fog bank. That’s what happened the other day, as we plunged through Deception Pass from sunny Cornet Bay, headed for the San Juan Islands, not taking too seriously the NOAA footnote about “occasional areas of patchy morning fog.”

But we rounded the bend and the bridge was nearly invisible… just a vague outline against a backdrop of thick soup filling the strait to the west. It was a narrow slack between two 7-knot current extremes, so with misgivings ameliorated somewhat by having been through the same waters a week before, I pressed into the murk, pulling foulies over my shorts and T-shirt. The pass itself required that we stay more or less mid-channel and avoid bumping into other boats or the cliffs on either side… but both were easily visible in the narrow channel and slack timing was spot-on. For a few minutes after emerging to the west I was able to visually keep a constant distance off the rocks to starboard, working around Lighthouse Point and into more open water.

But the fog grew still denser, with visibility soon down to 3-4 boat lengths. Suddenly our stately 6-knot speed felt really fast… yet there was a paradoxical desire to blast through it toward what appeared to be a lighter sky north of us, not timidly creep along with a lack of steerageway (urgently needed when random boats would quickly materialize and zip past enroute to the narrow window of rock and slack). Since we hadn’t quite anticipated this, and had been prevented by current timing from hanging back to shift gears and think it over, we found ourselves scrambling to gather information.

It became a sort of dance, actually. One of us would stand at the helm, peering into the soup, as the other would run up and down the companionway to gaze at the charting software tethered to the nav desk, and gesture appropriately (sometimes with urgency, other times with a thumbs-up). With the intent of hugging the shore and entering Burrows Bay, I kept tweaking the course, sometimes a bit randomly… you can see the result in the wiggly track above). While all this was going on, we were discussing our strategy; turning left and heading directly across Rosario Strait would get us away from the rocky shore and be the shortest route into the San Juans, but would also take us into the wide precautionary area filled with shipping traffic (I could hear one large rumbling engine as well as the foghorn of another somewhere off in the soup). I was tempted to follow our previous course up to the head of Burrows Bay and out the narrow gap north of Burrows Island, but the currents would be swirling like crazy by the time we got there, and if still foggy that might be unpleasant.

We decided to compromise and tiptoe out to Allan Island, then hug its shore around to the west and cross the strait where the shipping lanes are narrower. Somewhere in there I remembered that I have a radar (all this drama had been taking place in the space of 20 minutes or so), so I smote myself on the forehead, dashed down to the pilothouse, and fired it up… along with the autopilot.

Radar is magic, of course, and we quickly started getting a better handle on the situation… seeing the ships out in the strait, the rocky shore receding behind us, the nearing wall of Allan… then YIKES, there it was looming out of the fog, just as predicted but real enough to trigger a hard spin of the helm and an epithet or two. Keeping a safe distance off and flying by impromptu compass courses and Sky’s choreographically relayed news from the chartplotter, I kept fiddling with the Simrad WR20 bluetooth autopilot remote, a generally wonderful little gadget that chose this particular day to set a new record for the length of time needed to accept the command to get the hell out of standby and actually start steering. You can see where it finally did, up there, just to the west of Allan, where the track gets nice and smooth.

When the radar revealed an opening in shipping traffic, we headed west across Rosario Strait. Within a few minutes the fog cleared, and in sparkling sunshine we could revert to visual navigation, the fog already like a strange dream as we made our way behind James Island, through Thatcher Pass, up over Lopez Island, and eventually into Friday Harbor… where we have been anchored for 3 days.

While swinging on a chain and dancing in ferry wakes, I’ve been taking care of a few projects. One was the cabling of the pump that will allow the holding tank to be emptied at sea; another was the implementation of my long-awaited NOIDS (Nomadness Object Interconnection Database Server), implemented in FileMaker 9. This involved some painful relational database learning curves, especially since the book of choice didn’t arrive from Amazon before our latest departure from the lab, and all I have is help files and late-night rum-sodden Googlage on generic terms. I’ve been a FileMaker user since version 3, but never delved too deeply into relational territory.

Although still primitive, NOIDS works beautifully! There are two tables in the database, one for devices and the other for connections. The former collects all documentation about each connected thing on the boat, including containers for PDFs and photos, clickable web links, power, serial number, location aboard, and so on. The latter provides a record for each link between devices. The auto-assigned device ID is the match field, and I found a trick that lets me have multiple instances so that buses and manifolds are supported. A portal in the device database shows all known links for a given widget, each connection record associates device IDs with their long names to make it more readable, and there are buttons for migrating back and forth, making new records, and so on.

This documentation method is orthogonal to the classic library of drawings, but since reality is a big mushy thing with lots of overlap between “domains,” the database approach fits quite well and is easier to incrementally maintain. I think it will scale; so far I have only added the APRS tracker and holding tank stuff to provide a test dataset.

Cat on a Hot Tin Boom

Meanwhile, Java is adapting easily to the nautical life, seeming to enjoy the sensations of being afloat. In Cornet Bay we were on one of the mooring docks (little islands with no path to land), so in short order she hopped off Nomadness and found her way aboard Jacari Maru (whose owners, Larry and Nancy, joined us for an evening of nautical tale-swapping). Java spent much of her first couple of years wandering about 25,000 miles around the US during my BEHEMOTH-centric speaking tours of the era, so my fears of her objecting strenuously to seasteading are apparently unfounded despite her addiction to hunting the critters of forest and meadow.

Governments don’t always agree with the free movement of pets, however, so one of our reasons for parking in Friday Harbor had to do with getting an international rabies certificate to facilitate entry into Canada. We dinghied her in, and a delightful Cape Dory sailing vet named Tess made a dock call, did a quick exam, and slipped in a subcutaneous injection so gracefully that Java barely deviated from her habitual expression of bemused contentment. I rather envy her.

The difference, of course, is that now I know the boat; the tasks that are truly important have risen to the top, and the “would be nice someday” projects have been relegated to the hobby level. Still, this is huge, and one of the biggest challenges has been setting up winter moorage with associated workspace and figuring out how to actually take advantage of it. Camano Island is pretty much useless in this regard… it’s an island, technically, but it neither feels like one culturally nor offers anything in the domain of nautical facilities. I wish I had the time and budget to relocate the home base; this is going to be a rather intense period of complex system projects overlaid with the never-ending eBay marathon to convert static tonnage into boat parts.

But after that, if it’s not too late, our little magic carpet should be ready for open-ended seasteading on a global scale. Where is the fast-forward button?