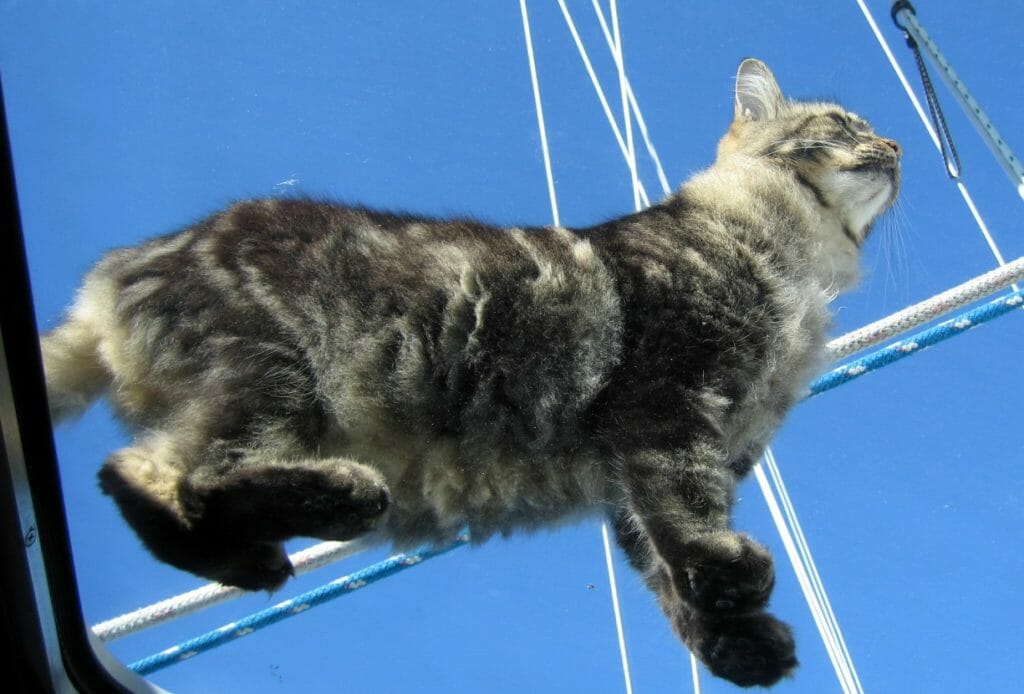 How bizarre it is to be at anchor in the Gulf Islands of British Columbia, confronting the daily challenges of field electronics projects and keeping up with battery/food/water usage while slurping catastrophic financial news via the Internet and trying to assess the impact. Talk about a cognitive disconnect… kayaking the harbor at sunset while numbers that affect my life careen out of control.

I rather envy Java’s perspective on all this, in the photo above.

She’s always walking on air in her mock-serious sort of way, and seems unaffected by everything that drives my life except where it converges with food acquisition (and she happily handles that on her own when not confined to a floating island of mouse-free steel). I try to emulate her detached attitude sometimes, but there is so much at stake… so much on the to-do list. Tonight I finally got the old B&G; Network sensors interfaced through an h1000 and an AT10 to the N2K network, so the DSM250 displays wind and depth data. She slept through most of the excitement, grumbling when I commandeered the captain’s chair to fiddle with my new numbers.

But the other night at anchor in Roche Harbor, I was out making the rounds of the mostly quiet setting (well, quiet except for the megayacht Discovery that always had an engine running; presumably shore power was insufficient). I returned to my modest little ship in glassy calm water with bioluminous puffs trailing from each stroke of the oars, and drifted up to the stern. Java was waiting.

I could see the thought bubble forming, but didn’t expect her to follow through. She made her way down the steps and put a paw on the dink gunwale… it floated off a bit, alarming her, and she bounded back to safety. I kept telling her about it, offering a ride. Slowly she returned, and this time I held the boatlet firmly to the mothership. She hopped aboard, and I pushed off.

Rowing softly with the forward-facing system, we made a big lazy loop around Nomadness. I have always heard that one must really start with a kitten if the intent is to have a cat aboard, but she took to it beautifully… watching bright-eyed as our little magic carpet floated around the universe of reflected stars and anchor lights.

This blog has often carried screen captures of Google Earth with an overlay of recent tracking data, and I should say something about how that is being done (especially now that there are three separate data sources).

I’ve started capturing track logs from the MacENC navigation software that I have been using on the Macintosh – it is working so well that I’m about to install either a Planar or Argonaut sunlight-readable LCD at the outside helm, dedicated to a Mac Mini. This is now saving tracks, but so far I have only been using them as a backup.

The ones that have appeared here are from the GPS Datalogger that I threw together a couple of years ago, based on a tracker from SparkFun Electronics. I like those folks, and they have lots of interesting stuff to play with… this gadget reliably stores the lat-long fix every second of the trip into files on an SD card, then I take those and manually edit them into KML files that open in Google Earth.

Both of those methods only record here on the boat, so I compile and publish the results later. But I’m now also running an APRS tracker that transmits my location on an amateur radio 2-meter frequency every 90 seconds. It’s only half a watt, so I didn’t expect too much — the one I used on Bubba was 25 watts — but with a little Diamond mag-mount whip on the steel deck I am getting surprisingly excellent results. Here’s the view of the past few days as displayed on the aprs.fi server:

In the Yahoo group for the product, I expressed my surprise at how well this was working, and another ham posted an amazing image that showed (for a the San Juan Island section) what stations had been receiving and forwarding my transmissions. As with all photos on this blog, you can click for a large version:

The red lines show the connections that made it as I sailed around, and the data payload they carried was then immediately piped through the net to various servers including the Finnish one noted above, as well as the venerable findu.com created by my old friend, Steve Dimse. You can always click that to see our current location with all the usual Google map features like satellite view and scaling.

If you are not a ham, and want a commercial version of this capability, I’m hearing good things about the Spot Messenger — though I have never tried one myself.

(By the way, speaking of sailing around – there are two Amazon 44 sisterships plying northwest waters. The blog of Ilari has some wonderful photos of the Queen Charlottes and the BC coast, and Mentor, owned by the broker who worked with me on this one, is home-ported in Seattle.)

Back in the tonnage-reduction domain, there have been two elephants in the room for quite some time now: Wordplay and Songline. These are the amphibian pedal/solar/sail micro-trimarans that, in various incarnations, consumed all available resources from 1993 until 2003 or so… a rather large chunk of my life.

When I finally got around to writing my will a few months ago, I directed that Songline should go back to Natasha… when we split in 2002, I assumed that there would be nautical continuity in the relationship domain and thus kept the Microships together. But that’s not the way things evolved, and I recently decided that there is no point in making Natasha wait for my demise to once again enjoy the lovely little red trimaran that she worked so hard to build (in some cases learning from my own exercises in over-engineering). The boat is now back in her hands.

Wordplay, on the other hand, continues to be the centerpiece of the 3000 square foot lab that was constructed specifically for the project…. she sits there in mute rebuke, really quite beautiful but covered in a layer of dust and neglect. It’s not right. I keep trying to think of what to do about this, and have a few ideas.

First, if a budding technomadling were to come along with the right mediagenic nature coupled with true core hard-core geekery tinged with a yen for adventure… and there were sufficient funding available… I would consider a deal that would include extensive training and some kind of early involvement in the mission profile. I’m not holding my breath, but ya never know. This isn’t the kind of boat that lends itself to brokerage… insanely expensive amphibian micro-trimarans that hold one person are not exactly what one would call a “seller’s market” these days.

Second, during this coming winter of extensive projects, Nomadness is going to be a few miles away by water from my home base. This is endlessly annoying, and last year in La Conner I was frustrated by the difficulty of maintaining any kind of continuity with a 2-hour round-trip commute between boat and lab. If I can find a waterfront home for the Microship and streamline her for the task, she’d be a hot little commuter… perhaps augmented occasionally by the sailing dinghy. If nothing else, the time on water would give me the sense of amortizing the project somewhat.

And third, Sky and I have been seriously exploring the flotilla idea, as discussed here recently. Technomads, Dramanauts… call ’em what you will… the idea is to assemble a spiritied community of adventurers who travel together and share skills and resources to maintain a creative and productive life of global voyaging. Since Wordplay was designed specifically for an earlier incarnation of this (and we now have a proper mothership), this could be someone’s magic carpet… or even provide a seat for a slow turnover of participants. I like this idea a lot… selling the Microship just doesn’t feel right.

This baby deserves better than long-term storage in a pole building in the woods!

Meanwhile, we are slowly winding down this adventure (444 miles at this writing), and are starting to feel the wrap-up events looming on the calendar: wood stove installation, bow thruster, bottom paint and rust repair, movement to winter moorage, a mad push to set up my mobile lab in order to have on-site facilities, and the timely resurgence of eBaying to help pay for all this stuff.

No madness indeed. This is crazy. Good luck this week with the insane economy…

Posted in Nomadness blog and tagged APRS, GPS datalogger, Java the cat, Microship
← Geeking in the San JuansRafting and Focusing →