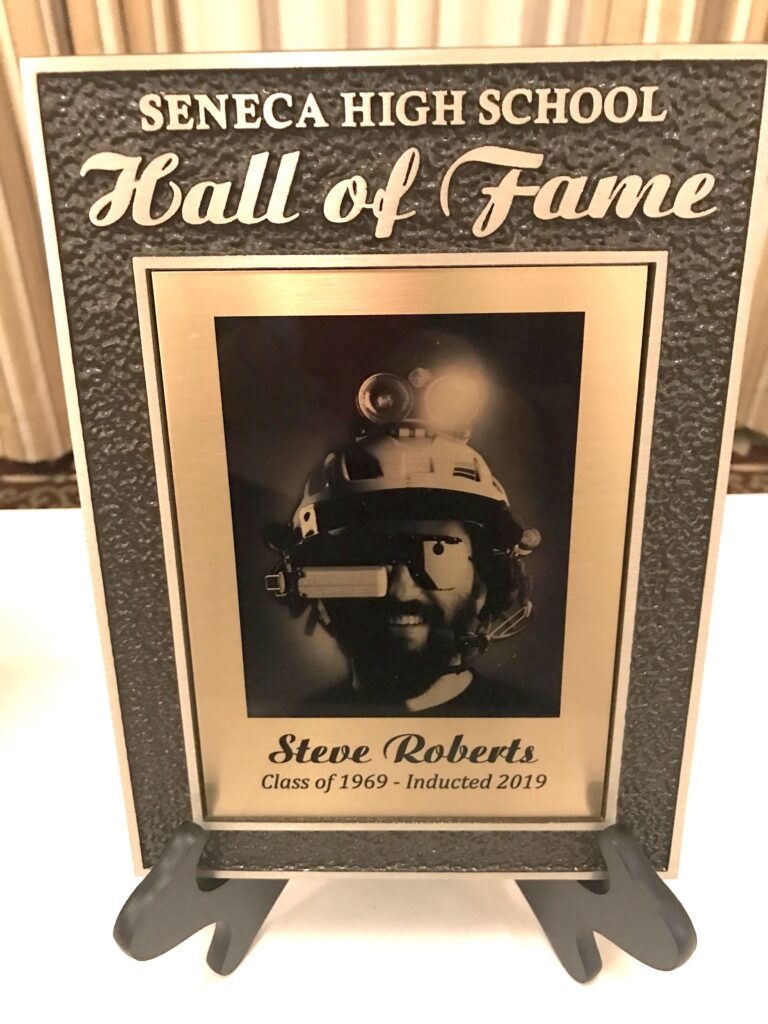 Note: the photo above is a plaque in the lobby of my old high school, since I was inducted into the Hall of Fame. This makes me smile, as I was often warned a half-century ago that my various behaviors would go into my permanent record. I guess that was true!

I was nearing the end of my time at Seneca High School in Louisville, and there were a lot of things on my mind other than calculus. The cute and brilliant girl in front of me, driving me crazy with innocent friendliness that I interpreted as mutual intrigue. The looming Science Fair, with my acoustic speech synthesizer still making horrific noises. The embryonic sixties culture slowly fomenting on the edges of the strait-laced Kentucky student body. Daily head-butting with my mother, fueled by simultaneous hormonal life-transitions. Teen-age existential angst, amplified by the enormity of change… people poking at me to decide about college and telling me that I am not working up to my potential.

Against a backdrop of this, I would gaze at the intriguing neck three feet in front of me, memorizing every wisp of blonde hair and ignoring what Mr. Jesse was saying about the initial velocity needed for a ball to reach height (h) of a 4-story building if thrown from the top of the porch at height (p), ignoring air friction. I had always been able to coast, gliding all the way through school with a minimum of attention, my mind elsewhere. It was particularly elsewhere now, and his words were a blur of random noise.

Today she was wearing the brown sweater. She shifted in her seat, paying attention, a good student, and I wondered how she could be with THAT guy.

Suddenly a piece of paper slapped atop the synthesizer control schematic on my desk… topped with a big red F. “See me after class.” Oh crap… I didn’t yet know the feeling of blue lights in the mirror, but it was like that.

This was 6th period, the last class of the day, and just like every afternoon at quarter-till there was a sudden buzz of clicks and hisses from overhead, then two sharp puffs of air into a microphone to test-test the PA system… putting an abrupt end to calculus as the announcements began. The principal droned on about events and football, while Mr. Jesse glared at the aluminum speaker housing on the ceiling, mimicked a few mannerisms, and rolled his eyes. Cheerleader practice this afternoon. Chess club meeting changed to Thursday. Congratulations to the debate team for beating Westport. Please, everyone, pick up your trash under the bleachers. Calculus was forgotten, people were chatting, and there was a general cacaphony as books were slammed shut and shoved into bags for the trip home. Mr. Jesse just looked annoyed, his sixth-period class always cut short by about 20% with much yet to cover.

I had about 30 minutes to spare before catching the bus to Jeffersontown, and sidled up to his desk with simulated confidence. He was a stocky man, severe in demeanor, sporting a military buzz/crewcut… and he wasn’t smiling.

“At this rate you’re not going to pass. What gives? You’re a bright guy, is there some kind of problem? Do you understand this is going to hurt your chances of getting into engineering school?”

“Sorry, I’ve been really busy with the Science Fair. I’ll do some studying. I’m sure it’ll be fine… um, do you have a suggestion for what to focus on? Can I take a re-test?” I knew I was reaching. My awkward words didn’t even make sense. The truth was that I just wasn’t interested, which was stupid because calculus is actually cool and useful.

The speaker clicked and buzzed again, with an announcement about a late bus. We both stared up at it, and I had a flash of inspiration. “Maybe I could make that thing shut up,” I said tentatively.

Thinking fast, I considered and rejected anything involving wires or a physical switch… what he needed was a magic wand to invisibly turn it on and off, without any evidence of tampering. Ahhhh yes…..

“Well, I could take a magnetic reed switch and glue on a bias magnet. That will make it remember whatever position it’s in, after being switched with a stronger magnet. I could put that in a long stick… ah, how about your blackboard pointer? Then you could just touch the aluminum housing in one spot to turn it on, and another to turn it off…”

“Do it, and you’ll pass!” And damned if he didn’t wink at me with a conspiratorial grin. “Just between us, you understand? And you still have to make an effort in class.”

50 years have passed since that day in 1969, so I can finally tell the story. I drilled out the butt-end of his wooden pointer, glued in a round bar magnet, and smoothed it over with Plastic Wood. With him standing guard at the classroom door one day after school, our cover story rehearsed, I climbed up on a ladder and unscrewed the aluminum speaker housing. Working fast, I glued the insulated reed switch (with a bias magnet taped to one end) onto the inside of the enclosure, wired it in series with the speaker, then did a few tests with an ohmmeter to mark the outside with felt-pen dots so he would know where to touch with his “magic wand.”

And it worked beautifully. Every afternoon, after the principal blew twice into the microphone, Mr. Jesse would mime blowing back, then saunter over with his pointer, turn it end-for-end, grin, tap the speaker housing with a grand flourish, wink at me, and resume teaching with no further interruptions.

I was happy with the B I received for my hard work in Calculus, and learned all that differential and integral stuff later… when I really needed it.

A half-century later, I heard from an old classmate, Sam Denny: “I read your story about Mr. Jesse and the intercom.  I was Mr. Jesse’s student aide first period our senior year, and as such saw both your rod in action and also heard from Mr. Jesse the history behind it.  I remember that he found it valuable in more than one instance.”