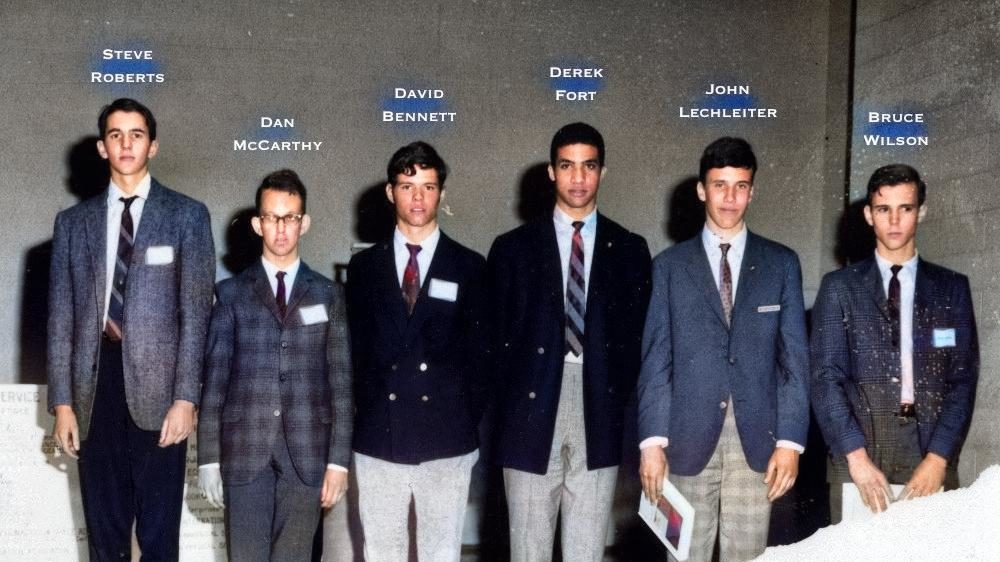 After three years of working on speech synthesis, I finally made it to the International Science Fair with a machine that showed promise… a working model of the vocal tract based on X-rays of my own head. With an arcane user-interface that included a voicing foot-pedal and fingers inserted into a tongue-emulator, I could create crude but sort-of-recognizable speech. Of course, this approach has long since become irrelevant (though I do wish I had made a tape recording, which would be amusing now).

This article in the Louisville newspaper highlights the regional science-fair winners, and the text excerpt below covers my own part of the story. It is fascinating to note that John Lechleiter, also featured in the story, went on to become the president and CEO of Eli Lilly and Company!

Deaf-mutes, the U.S. Navy, and wine-makers may one day thank three Jefferson County high school students for making life easier for them.

The students were three of the 105 from 16 schools who entered scientific experiments yesterday in the annual Louisville Regional Science Fair at Jeffersontown High School.

One of them, Steve Roberts, 16, a Seneca senior, who had won something at three straight regional fairs, made it four in a row yesterday.

With his system of speech synthesis, Steve scored enough points to be named one of the two over-all winners who will compete in a national science fair, May 5-9 in Forth Worth, Texas.

Steve said he has been working with speech projects for three years, but his winning project was the first time he tried to use some type of device to synthesize speech electrically in much the same way the vocal tract does. He hopes his device will one day mean that deaf-mutes will be able to speak “if they learn how to use it.” Steve also won the local award in medicine and health category.

NOTE: the rest of this story may be read in the scan below, and covers Danny McCarthy for his symbol-based “syntactic phonetic universal language,” John Lechleiter for his work on producing electricity with marine bacteria, and Carol Hoehler for her work on adding yeast to wine fermentation. It also mentions Robert Ballard, Doug Hubbard, Jay Sumner, Derek Fort, David Bennett, and Bruce Wilson. Click to enlarge:

Given the remarkable career of John Lechleiter who went on to run Eli Lilly and Company, his part of the story is below:

John Lechleiter said he found that the test tube mixture “would yield current as long as the bacteria stay alive. It regenerates itself — it won’t die out like a battery.”

He said he hooked one tube up and it generated the same amount of electricity at the end of three months that it had originally.

“You might need enough water and bacteria to fill a room,” he said, “but I see the combination as possibly running a ship. Think of the money that would be saved!” John won the local chemistry award.