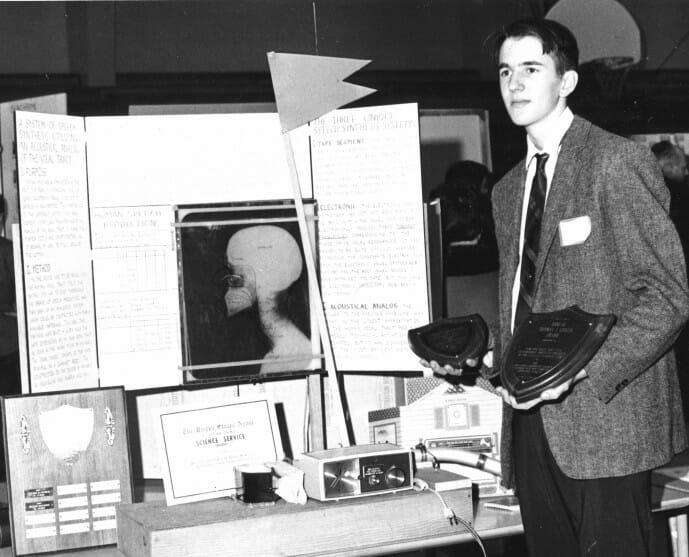 Science fairs, quite simply, kept me sane through those dark school years. The allure of the project, the deadlines, and having a justification for obsessive focus on things other than boring homework… these events shaped my life. Every year from 5th grade on, I had a science fair project, and this one was the last: A system of speech synthesis utilizing an acoustic analog of the vocal tract.

As I dig through the archives, more detail will turn up (including the text of those posters, unreadable in the photo). For now, here is a story from the current director of the Louisville Regional Science & Engineering Fair… click the title link to see the original and other content at their site.

Because we are highlighting the 50th Anniversary year of the Louisville Regional Science & Engineering Fair on our Facebook page, we recently were contacted by a participant from the late l960s. He is actively sharing his story with us and insists that LRSEF has had a great impact on his life and career. What a story he has to share….

Steven Roberts entered the Louisville Regional Science Fair each year of high school. He attended Louisville Country Day until the ninth grade (skipping the sixth!) and finished at Seneca High School, which did not have its own fair.  He spent this time working on a speech synthesizer, taking a one year break to build a speech-compression machine that copied an audio stream and then allowed accelerated playback without any pitch change. Steven’s senior year project is the one that won him a trip to the international competition. What he called an “acoustic analog of the vocal tract” was a working model based on x-rays of his own head. This consisted of a buzz source switchable with a pedal, and a tongue and mouth cavity that was controlled by hand. While the sounds were a bit difficult to understand, the project was thoughtful enough to earn Steven a trip to the 1969 International Science Fair in Fort Worth, Texas.

Coming of age during the inception of the Internet catapulted Steven into experimenting in new and profound ways. From a cross-country trip in his “Electronic Cottage on Wheels,” to a binary handlebar keyboard on his bicycle that was able to send e-mail, to his Unixcycle BEHEMOTH and the water Microship, Steven has never stopped inventing. He spent a couple of years on the speaking circuit with the bike (which is now in the Computer History Museum) and wrote for many different publications.

Today, Steven is working on a successor to the Microship, called Nomadness, with an emphasis on star-ship like technology. The sailboat is already fully functioning, but Steven craves more, so he continues to improve work on the boat. All of these adventures, creations, and experiments can be said to have started with Steven’s first love – the radio.

He leaves us with this comment, “All of this, my whole crazy career, was potentiated by science fairs. I have often joked that I never outgrew them, but it’s not really a joke.  Not only did they give me a project-oriented context for exploration…but they established habits for presentation and explanation that lay the groundwork for my adult projects… exhibited in the media, trade shows, conferences, and at corporate sponsor sites.”

Steven’s story is one that is fascinating and brilliant, read his blogs and site to find out more about how science and his spirit of innovation has truly affected his life.

(I have three of those “Louisville Area Science Fair Winner” patches for sale.)