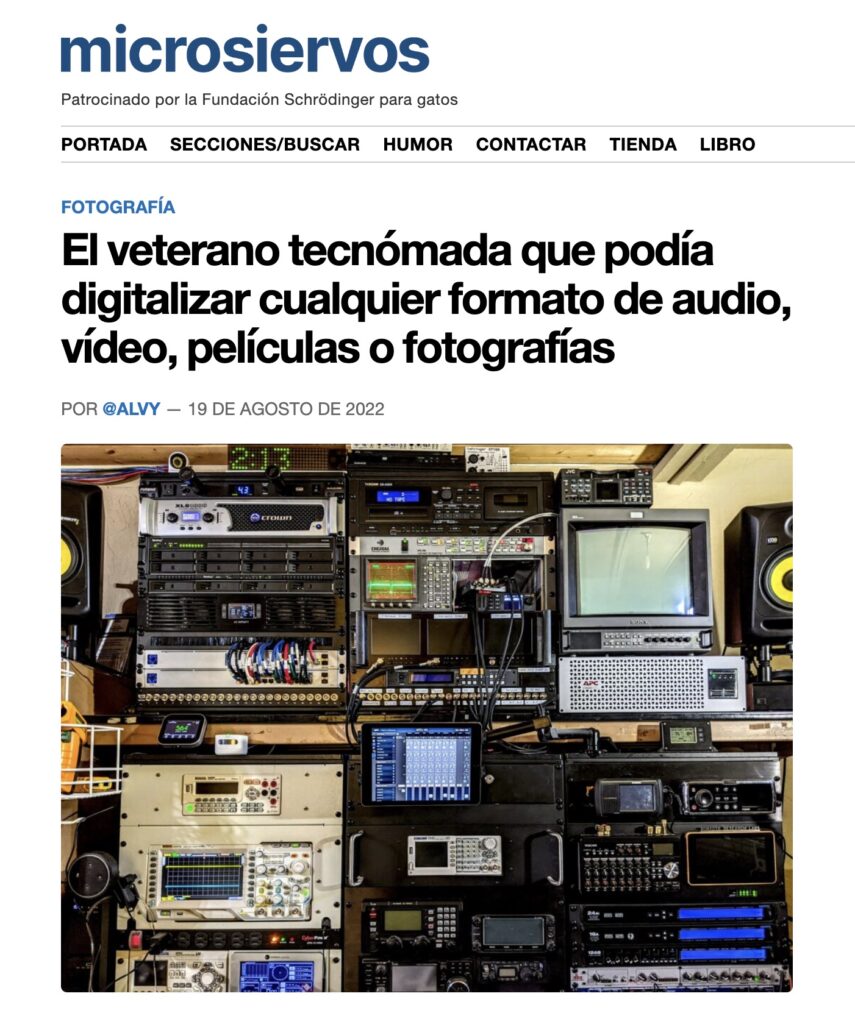 This site in Spain posted a story about my digitizing activities, and quite surprised me with a flurry of web traffic and a few inquiries about home movie archives. According to Google Translate, the title reads, “The veteran technomad who could digitize any audio, video, film or photo format.” Since this is such a good story, I’m taking the liberty of posting the translation here in my archives… but if you read Spanish, please find the original here.

Steven K. Roberts inherited a collection of 8mm film from his father shot over almost 50 years. He dedicated himself to digitizing them to the highest possible quality, and with what he learned he decided to offer his services to the public, turning the hobby into a business. He soon expanded the formats: Super 8, 35mm, slides, negatives, Beta, VHS, 2000… and so on with all the formats he could find, little by little buying different equipment. In the end he ended up being able to digitize “any homemade format invented by mankind”, hence his title of Wizard with a Time Machine, as he was called in a small magazine, the Journal of the San Juan Islands.

Roberts’ work is peculiar and I would even say endearing because he works with unique material: the unique and unrepeatable memories of hundreds of families, historical scenes and unrepeatable moments. Have you noticed that whenever people flee from a fire or flood they try to take or regret having lost their photo albums? Everything else can be replaced with money, but for many people the box of photos or family videos are irreplaceable.

It seems to me a commendable and enviable job, as well as satisfying, although it is hard, very manual, delicate and time-consuming (if you have ever tried to scan photos or convert videos you will know it). I made an attempt to completely digitize old family history and ended up setting up a kind of light box to be able to “scan” (photograph) old photos – the quality of an iPhone or almost any camera is more than enough – and I bought a capture cheap (~25€) video converter that works surprisingly well. For slides I don’t have a good solution except a flatbed scanner which is extremely slow and takes up a lot of space. In general, the idea is to have a good capture and if you later need the photos, you can start retouching and repairing.

Roberts offers his services at the Nomadic Research Labs, which take their name from his “technomad” attitude. He apparently likes inventions and in the 80’s he created a computerized bicycle, with local network and everything, which is now in the Computer History Museum in California. With that bicycle he could go from one place to another surrounded by technology, hence the peculiar term that combines technology + nomad.