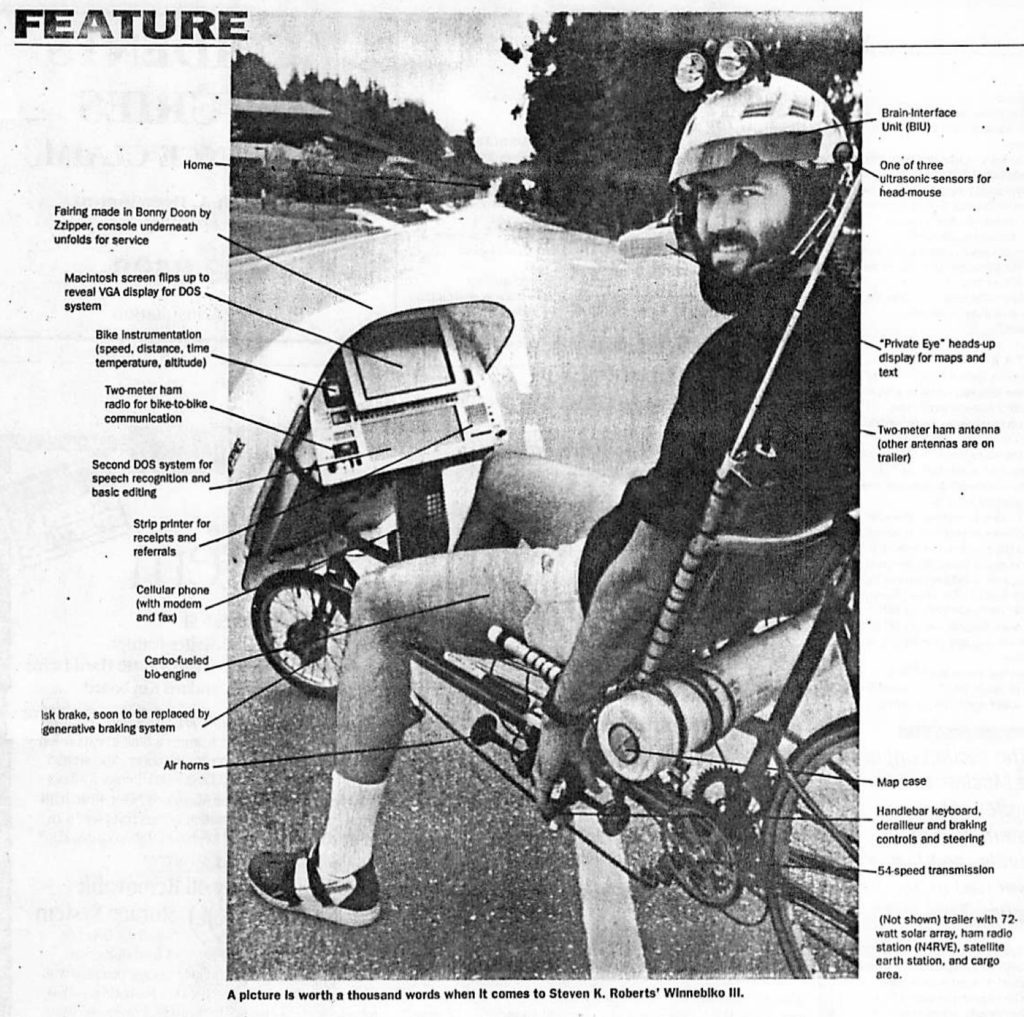 The first year or so of the BEHEMOTH project was in Santa Cruz, and in early 1990 I had lab space at Borland International. The photo above is on that street in Scotts Valley. This is a local free publication, lively and fun, and it was nice to have the new version of the bike appear in its pages.

by Virginia Alexander
Good Times
May 3, 1990

Other front panel devices include a miniature graphic printer, digital instrumentation for speed, altitude, temperature, time, inclination, and elevation. (This is not a complete list by any means. For a closer look, see photo on this page.) Everything on the Winnebiko III is computer controlled except for basic safety equipment like lights and brakes.

The making of this hi-tech bike has not been easy for Roberts, but it has been fun. Sponsored by more than 100 companies, Winnebiko III has kept Roberts on the road to adventure for the past six years riding, writing, publishing, creating, communicating, and inventing. For Roberts, the Winnebiko III is more than an invention: it’s an obsession.

Roberts’ obsession is clear when you see him at work in the lab. The recumbent bike stands patiently in his lab (space donated by Borland) while Roberts affixes important cables, monitors, a gizmo here and there. Lifting his helmet from atop the seat, he slips it on his head and proceeds to reveal its true function.

With the helmet snug on his brain, Roberts resembles a fighter pilot, especially with so many attachments. For example, a “Private Eye” computer screen projects from one side of the helmet. It’s used for seeing maps, controlling the system, reviewing text without tying up the big screens on the console.

“Each computer has its own voice so I know who’s talking,” explains Roberts.

The primary interface computer is the portable Macintosh which he uses the hypcrcard program on. The Mac screen on the dash flips up to reveal a DOS screen which he uses for satellite tracking and CAD (computer-aided design) applications.

“The whole design layout of the bike is kept here,” Roberts says pointing to the console. “There are three hard disks… and three floppies.”

Roberts chose a recumbent bike — those long bicycles with a back supported seat and handlebars beneath the chair — as the vehicle of his invention.

“The recumbent is the Macintosh of bicycles,” insists Roberts. “My system is 300 pounds, and I’ve never had to get off to push.”

The view is improved aboard a recumbent since the rider is seated in an upright position, and nothing in front obstructs the sights. As a matter of fact, even accidents aren’t as bad as with regular bikes since you can’t go over the handlebars and fall on your head. But you still can fall off — to the side and hurt your hip, leg or shoulder.

Not that any of that bothers Roberts much, who has pedalled his way across much of this country.

COMPUTING ACROSS THE USA

Combining his passion for writing and travel, Roberts wrote a book about his experiences upon a high-tech bicycle odyssey that took him from Ohio to California. “Computing Across America” was written while riding over thousands of miles of pavement via the binary keyboard conveniently located in the handgrips of Roberts’ recumbent.

Roberts even receives his mail on the road bike. Battery operated ham radio with an antennae mounted on the bike’s trailer, laptop computer in place, Roberts goes to work answering and sending out mail via a packet radio link-up through radio waves wherever he is. This innovative computer-cyclist gets about 8-10 pieces of mail a day through this method (similar to Internet) that’s connected to nearly 20,000 international computers.

These micro sats have just been launched in French Guyana,” says Roberts casually. “It’s like a BBS — bulletin board system.”

Currently Roberts and riding partner/confidante Maggie Victor have been busy publishing “Nomadness,” a bi-monthly high-tech journal. Within its pages are tales of nomadness, aspects of life aboard the Winnebiko, strange and wonderful people they meet, and updated technical information.

Anyone can subscribe to this magazine by sending $15 a year for six issues for third class bulk mail, or $21 a year for first class to: Nomadic Research Labs [address redacted] (“Computing Across America” is available at this address)

Perhaps Roberts describes his wanderlust best in one of his own articles, “Yearning for a Piece of Asphalt.” It ends with a quiet, introspective adventurer: “I’m standing in the window with a sore heart, watching the road go on without me.”

So wait he must, until the Winnebiko III has its wits about it and functions as well as the over-active imagination of the creator behind It. Something tells me it won’t be long.