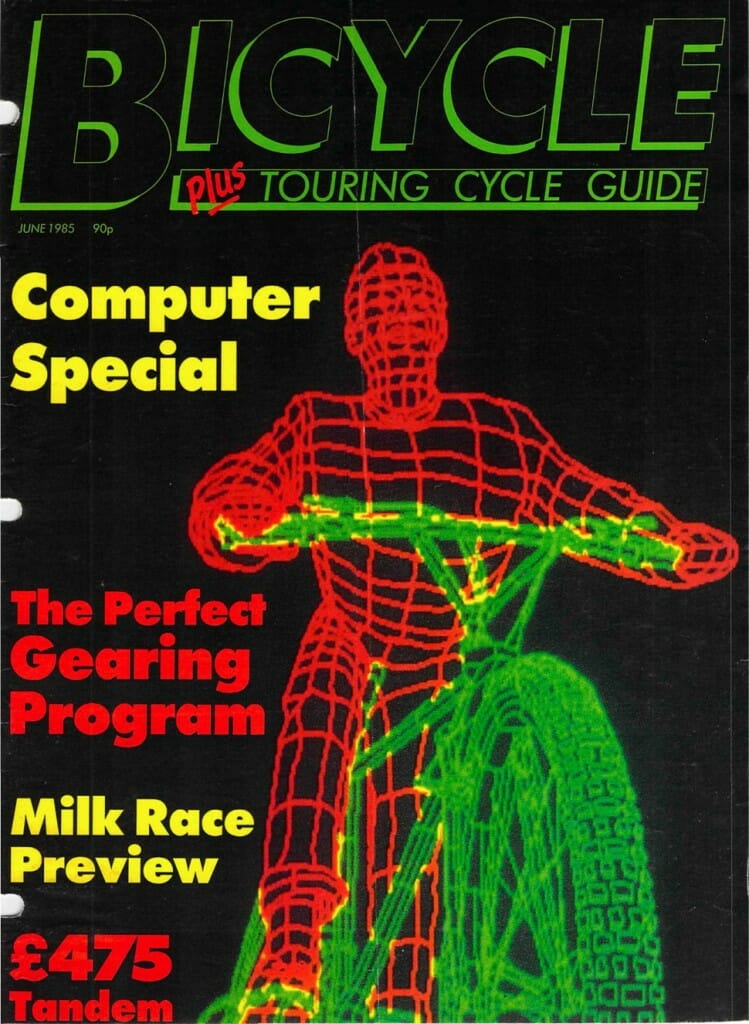 This entertaining article in a British bicycling magazine was written during my layover at the end of the first 10,000 miles, when I was holed up in San Clemente writing Computing Across America. My parents were somewhat distressed by the title, but I reassured them that “low life” has a different connotation across the pond. Well, I hope it does…

Solar panels, a computer and CB radio are but a few of Steve Roberts’ basics on his recumbent tour of America. Gordon Black crosses mountains and deserts to meet the hi-tech explorer.

Equipped with a portable computer and a recumbent bicycle loaded with all he needs, 31-year-old Steve Roberts is cycling his way round the vast American continent. Since turning his back on a suburban existence in Colombus, Ohio, Roberts has crossed America and logged 8,500 miles.

From distant locations all over the United States he communicates with an assistant in Ohio, via a lap-sized Hewlett-Packard 110 portable computer. In the process he files stories for a newspaper column he writes and magazine articles.

But the real purpose of his journey is two fold: to prove that life on the road can provide a living and to write a book.

I caught up with Roberts in Palm Desert in Southern California. Like a migratory bird, he was wintering there and putting the finishing touches to his book, aptly named Computing Across America.

Understandably, his is no ordinary tale of a bicycle traveller. Rather it is an old-fashioned narrative of America’s rich scenery and an account of people in the computer age. With the aid of that small computer, Roberts is never more than a public telephone away from hundreds of other users on a network called CompuServe.

And although he keeps a travel-log like other travellers before him, he could rightly be called a pioneer. Who else has a solar panel on his or her bike? Who else has done such mileage on a recumbent cycle? Who else has tripped electronics down to such a basic application as a pedal cycle?

“Actually I had this idea for a few years but I was waiting for the technology,” says Roberts. “I tried to do this about four years ago with a regular bicycle and a computer system built into a trailer.

‘The whole system was ridiculously heavy and I did not know anything about touring gearing. It was a mess, ” he readily admits. “I just went charging headlong into it and tore a ligament in my right knee on a training ride trying to macho my way up a hill with all that junk.”

That early experience effectively killed off the idea for several years.

By that time Roberts had already undergone what he describes as a “mid-life career change. ” Largely self-taught in micro-electronics, he set up and ran a successful engineering company in Kentucky at the age of 20.

“It was unusual enough at that time that I started to get a lot of media coverage,” Roberts recalls.

“Suddenly I realised I had ruined my hobby by turning it into a business. Computers were no longer a hobby.

“I no longer stayed up at night because I was enchanted with getting something to work. I would stay up instead because a customer was breathing down my neck. ”

Two books followed and he made a success out of writing, mainly for technical magazines. But still he did not have the lasting satisfaction that he sought.

“Then in the spring of ’83 the Radio Shack model 100 came out. Suddenly everything just clicked. I found out about recumbent bicycles, I found out about the little computer and had started to use CompuServe, ” states Roberts.

“I set out believing it was going to be a sort of break between one life and another. It had the feeling of a lark about it, ” he concedes, “a rather organised and profitable lark, but a lark nonethless. ”

Averaging 65 miles a day he has taken his eight foot long cycle from one coast to the other, across mountain ranges and deserts in a trip that has illustrated two sides of American society.

In the farmlands of rural USA his bicycle has brought comments and gawps of astonishment which quickly dissolve into stares of incredulity when he hooks up his computer via a modem to a public ‘phone.

On the other end of the line he communicates with friends he has never met, dispatches chapters for his book and transmits direct to the newspaper USA Today his twice monthly column.

Onlookers could probably handle the computer or even the bike on its own, but the combination often proves too much.

He says with a smile: “One guy walked up to me and said ‘how many wheels that got?’ So we counted them together.”

In another of countless stories he relates the occasion when a farmer in Ohio came over to Roberts, who was using his computer at the time, and remarked: “You with NASA? ”

Mostly Roberts has met with friendliness during his long travels. “Sometimes I find I meet with hostility but I can usually defuse it if I can make eye-contact. It is very a friendly open way to travel. It also puts the world on a very human scale. ”

Despite his fondness for his mode of travel, he would not swop his recumbent for a normal bike.

“If I had to switch to a regular bicycle I would quit doing it. I just simply would not do it, ” he states adamantly. ‘The whole idea of riding around for any length of time on one of those things strikes me as absurd. It hurts too much. Even once you’ve acclimatised to the pain, which you do of course, you still cannot see the world very well. ”

One reason for a spirited defence of the recumbent is the amount of equipment Roberts carries. He believes it would be impossible to carry as much on a standard lightweight tourer.

He is probably right. Where, for instance, could a solar panel go on an ordinary bike? Not to mention the other decidedly nonstandard other equipment Roberts carries.

In all the total weight of bike and luggage totals about 200 lbs, a formidable amount. Not that it has deterred the rider from the most arduous of territories. Without getting off he conquered the 11,361-foot Slumgullion Pass in the San Juan National Forest.

Recalling that journey in an article in Online Today Roberts wrote: “The land has become dramatic, fulfilling the promise of Colorado. After extricating myself reluctantly from Sante Fe, I climbed out of New Mexico and within three days found myself in the Rockies. I crossed the Continental Divide northwest of Creede, then immediately outdid myself in the same afternoon by huffing my machine to the top of Slumgullion Pass. With the daily rain only minutes behind, I flew down the switchbacks to Lake City, losing my altitude at speeds up to 48.4 mph while buzzing furiously on raw adrenalin. I had to painfully avert my eyes from the grandeur just to stay on the road. ”

Perhaps harder than anything mountainous Colorado could throw at him, he tackled the desert lands of Utah, California and Arizona. In one memorable incident on a long and straight stretch of desert road in Utah he passed a sign warning of no services for 100 miles. Motorists are warned not to cross desert areas without adequate drinking water at any time of the year. Normally Roberts carries three water bottles on his bike, plus a fold-flat plastic container for long sections. However during that day in Utah he ran out of water. In the absence of ‘phones — or any form of “civilization” — he put out a call on the CB radio.

A kindly couple in a motorised camper answered his distress call with lunch as well as water.

But if it appears that Roberts cannot live without materials of the electronic age, that is wrong. He acknowledges reliance on technology but says that same technology has provided him with the means to escape other forms of modern-day life.

He has not written a cheque or paid a bill since he left “normal” life behind. All such transactions are dealt with by his assistant Casey in Ohio, who he pays a flat percentage rate on his income.

“She takes care of absolutely everything,” Roberts says. “My business has become pure writing, which makes it a lot more fun. I can have the freedom to go anywhere and spend as long as I want. ”

Which is exactly what he has been doing during his snaking route from the north east to the south west. With the aid of the computer network, accommodation is often a matter of accepting a kind offer of a bed for the night. He carries a tent, but prefers not to use it.

He has tentative plans to complete his loop round the states and then tackle Europe. Or he may even settle down with a lady, he says.

“If you think too much about where you are going you lose respect for what you are. That is really a syndrome that is common to all motorised vehicles and certainly with flying, where the trip itself becomes a horrible, boring thing that has to happen before you can get to your destination.

“Whereas on the bike the purpose of the trip is the TRIP. ”

Built by an Ohio-based frame builder, Roberts’ bike has many unusual features. It is powered by an eighteen speed derailleur gear set up, with crossover chain arrangement. The rear wheel is unbowled, but is balanced on the left side by a drum brake, one of three brakes on the bike.

Steering is by means of metal rods linking the front forks with handlebars located under the seat.

Other features of the machine are: digital speedometer and cadence indicator, thermometer, altimeter, clock, built-in tape recorder, tungsten headlamp, solar panel (to charge batteries), electric horn, compass, anti-theft security system, CB radio and flashing orange beacon. “Makes me look like a roving hole,” says Roberts. So far he has met with no major mechanical trouble, but has recorded 10 punctures, three of which were caused by a tape designed to prevent them!