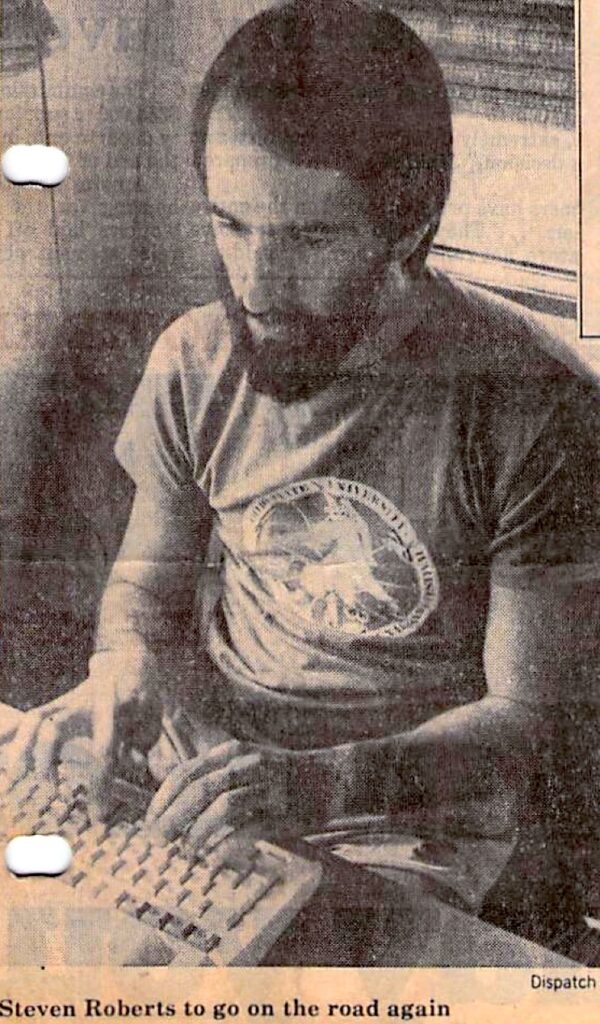 This was a glimpse of a mercifully brief period, just after the first 10,000 miles, when I thought I’d be taking off around the US in a motorhome. I was still working on the Computing Across America book (with editorial musical chairs causing a publishing-industry horror story), and had plans to go mobile with my freelance business. Instead, I worked for Discovery Systems in Columbus for a few months, and was unable to resist the temptation to build a second version of the bike and head out again under human power. But somewhere in there, this interview with local media occurred, telling a very different narrative!

A former Dublin man has turned a page in high tech travel.

Steven Roberts rode across the United States for 18 months on a bicycle, recording his thoughts on a computer and writing a book as well.

Hungry for more, Roberts is about to begin another journey. This time, he will tour in his “electronic cottage on wheels” — a motorhome with a custom-designed interior.

Roberts, 32, traveled 9,760 miles across the country on an 8-foot recumbent bicycle from September 1983 until last Spring.

His book, Computing Across America: The Bicycle Odyssey of a High-Tech Nomad, will be published next spring, he said.

Instead of pedaling his 135- pound bike to promote the book, Roberts will drive a 21-foot motor home equipped with solar panels to produce electricity for a portable computer, printer, lights, telephone, air-conditioner and various radios.

A small satellite dish will be on the roof to connect Roberts with a communications satellite so he can appear on local television stations, he said.

While biking, Roberts described his thoughts into a tape recorder via a microphone attached to his helmet. He transcribed the notes into the computer. He kept contact with subscribers of a Columbus-based national computer network. Roberts also wrote articles for computer publications.

“I’ve been living sort of a Whitman’s Sampler lifestyle,” Roberts said during a recent visit to Columbus. “It’s a way to get paid for playing, and what playing is to me is learning.”

The need for security that once came from owning a home and having a steady job evaporated when he hit the road, Roberts said.

Roberts, who is divorced and the father of a 5-year-old girl, admitted he sometimes found life on the road lonely. He made new friends and sometimes arranged blind dates over the computer network.

“My notion of roots has changed,” he said. “This sort of life isn’t for everybody.

“It’s now my lifestyle and I don’t have to keep thinking about returning.”